‘The enemy of my enemy is my friend’: how the rise of hate crimes is bonding Jews, Muslims 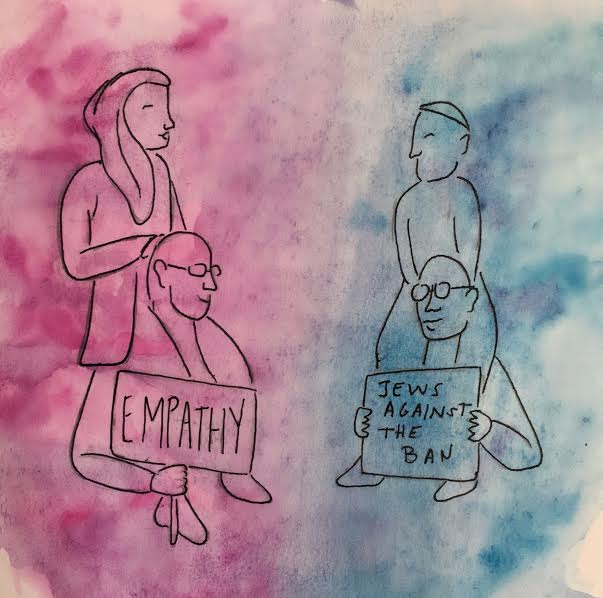 Nuccio DiNuzzo of the Chicago Tribune. DiNuzzo captured a Muslim family and a Jewish family bonding at an anti-immigration ban protest at Chicago O'Hare Airport in January 2017. " />

This illustration by Rose Shulman-Litwin '18 is an artistic representation of a photo by Nuccio DiNuzzo of the Chicago Tribune. DiNuzzo captured a Muslim family and a Jewish family bonding at an anti-immigration ban protest at Chicago O'Hare Airport in January 2017.

Shots fired, cemeteries desecrated, hatred fueled. This has become the reality for thousands of Jewish and Muslim people around the country in recent months, with anti-Semitic and Islamophobic crimes on the rise. But less covered by the media is the unity of minority groups in the midst of all of the hatred.

Hate crimes on the rise

Religiously-motivated crimes are not new, but they have been steadily increasing in recent years, and even months.

“According to the FBI, Jews and Muslims together account for the vast majority of religiously motivated hate crimes: In 2015, 51 percent were committed against Jews, while 22 percent were against Muslims—and those are just the crimes for which the motive can be proven,” writes Emma Green in The Atlantic.

According to a CNN article about the anti-Semitic crimes, ”the incidents made national news when, on January 9, 15 Jewish centers and schools received bomb threats. Since then, the threats have occurred in waves, with a series of threats on January 18, January 31, February 20. The latest wave came [March 6], with another 31 threats called in to 23 JCCs and schools — bringing the total number of threats to 100.”

Similarly, since 9/11, “Muslims have been shot and killed, execution-style, in their living rooms and outside of their mosques. They have been fatally stabbed on their way home. They have been beaten in their stores, in their schools and on the streets. They have been kicked off airplanes, egged outside Walmart, scorched with hot coffee in a park, shot in cabs and punched while pushing their children in strollers,” writes Daniel Burke for CNN. “They have seen their cemeteries vandalized and their Quran desecrated.”

President Donald Trump weighed in on the issue of anti-Semitism, after many complaints about his unwillingness to condemn these acts of hatred.

According to a New York Times article, Trump said that “the anti-Semitic threats targeting our Jewish community and community centers are horrible, and are painful, and a very sad reminder of the work that still must be done to root out hate and prejudice and evil.”

Dr. Saba Soomekh, the Associate Director of Research at UCLA’s Leve Center for Jewish Studies, believes that Trump’s response was insincere and only done because of pressure from the people around him.

“I think if he was sincere, he would have spoken up immediately. It took him a very long time to say something,” she said. “When he was asked about it with a meeting with Bibi Netanyahu, his first response was to talk about the amount of people who voted for him. Then, Netanyahu had to then talk about and defend Trump and say that anti-Semitism is wrong. Why does the Prime Minister of Israel need to speak on behalf of our American president? Because our American president didn’t do it.”

“I do think that with the election of Trump and his cabinet, and with [Steve] Bannon being in such a high post, and with other high officials who may or may not harbor anti-semitic feelings, there are groups,” Talia Geffen, a Jewish teacher of Spanish at Archer, said. “There are neo-Nazi groups, and there are definitely white nationalists in this country right now who are just feeling emboldened with this election and administration.”

“That sense of camaraderie, because both groups are feeling so threatened right now, has never been seen before,” Soomekh said. “The Trump administration and their sanctioning of neo-Nazis, I don’t even want to call them the alt-right because is such a flowery word for what they are, [are] allowing the Steve Bannons and other people to come out and be supportive of these types of groups. Whether or not they are being vocal about [their support], they are not saying anything against it. I think that has really brought the two communities together in a way we haven’t really seen anywhere else.”

Trump has also been criticized for his treatment of American Muslims, not only ignoring the anti-Muslim crimes around the country, but for implicitly endorsing them. Following his ascension to office, Trump quickly attempted to enact his ‘travel ban’ targeting predominantly Muslim countries.

Trump’s second executive order, which followed constitutional challenges of the first, blocks citizens of Syria, Iran, Libya, Somalia, Sudan and Yemen from obtaining visas for at least 90 days. The order also extends the admission of refugees into the United States for 120 days.

Tomi Lahren, the host of Tomi on TheBlaze, a right-leaning talk show, disagrees with the controversy around the ban. She believes that people are getting angry for no reason for something that is meant to protect America.

“The leftist snowflakes will make up any excuse to make a cardboard sign and throw a tantrum,” she said in a segment on her show. “It’s arts and crafts disguised as a social justice moment.”

Fear of Muslims may stem from a lack of understanding, with one study finding that “only 16% of the public report knowing a lot about the religious beliefs and practices of Muslims, while more than eight in ten say they know a little (57%) or nothing at all (26%).”

Rabbi Ed Feinstein, a rabbi at Valley Beth Shalom Synagogue, expressed his worry not only for his people, but for all other minority groups. He said that it is not just the responsibility of one single group to fix the problem, but that everyone needs to be held accountable for the injustices occurring in our society.

“We are committed to a society where people can be who they are, contribute their gifts to the culture, and not be afraid to walk the streets, be out, and be proud to be who they are. If anyone in this culture feels afraid or ashamed, that’s a problem for all of us,” he said. “The rise of hate in America over these last months is very concerning for everyone that loves America, and who loves an American that is tolerant, and democratic, and respectful of persons.”

The increase in crimes seems to provide a surprising new community aspect to those being impacted. For example, Jewish cemeteries in both Philadelphia and Missouri have been vandalized, with hundreds of gravestones knocked down and destroyed, but  a variety of religious leaders and citizens have helped with the restoration.

Tarek El-Messidi, a Muslim activist from Philadelphia, runs a Muslim non-profit called Celebrate Mercy. He started a fundraising campaign with the political organizer Linda Sarsour. They felt motivated by a story about the prophet Muhammad, who stood as a Jewish funeral procession went by as a sign of respect, according to his interview with The Atlantic. El-Messidi’s campaign quickly reached its funding goal to rebuild the gravestones in Missouri, and all extra funding was used for the ones in Philadelphia.

“The silver lining in this tragedy, and this kind of eco-system of hate is that both communities are reaching out, getting to know one another, and standing together to defend each other against this kind of bigotry,” El-Messidi said.

“I’m feeling that the faith community in the US is strong. A caretaker for a nearby Quaker cemetery has been [restoring the cemetery] for hours, and Muslim and Christian friends and colleagues are reaching out. Acts of violence against Muslim and Jews will only make us stronger and bring us together,” Goldman said.

There is an old saying that states, “the enemy of my enemy is my friend.” Muslims and Jews, whose relations have been especially tense since the rise of Arab-Israeli conflict, may be acting on this premise with joint effort to stop these crimes.

“It is so disgusting to me that in 2017 this amount of xenophobia is taking place today. It is becoming mainstream; it is no longer under the radar,” Soomekh said.

Geffen also said that she definitely felt the unity between groups that have been largely marginalized recently.

“I have, thank goodness, not heard or experienced any discrimination [personally], but I feel like I have to add the word ‘yet’ because I am scared for what is going to happen in the future,” Geffen said. “I myself, as a Jew, have this obligation to stand up for these other groups.”

Feinstein said discrimination against any religious group is his problem:

“The history of anti-Semitism and the history of hatred is that it doesn’t start with a Hitler. It starts with small acts that become normal. The problem is that if small hate becomes normal, and we ignore it and we neglect it, we don’t respond, then that becomes the new normal and big hate get built on top of that,” he said.

In a Facebook post, El-Messidi released a call to action for all people in response to these hate crimes.

“I want to ask all Muslims to reach out to your Jewish brothers and sisters and stand together against this bigotry.”