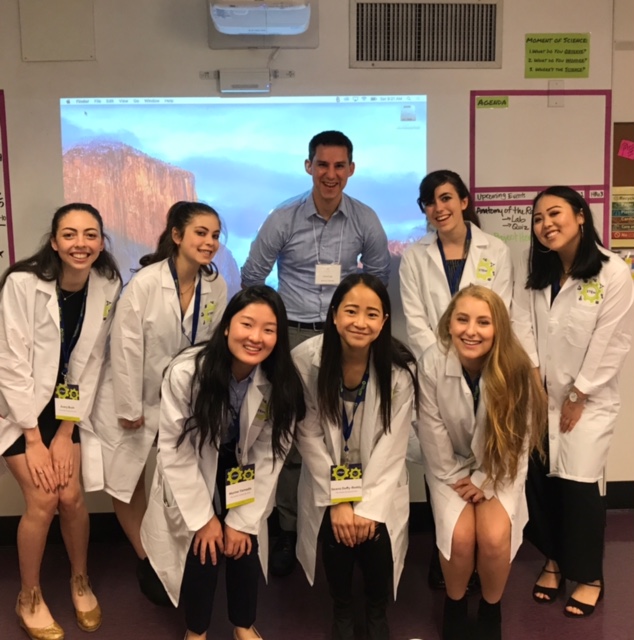 Students in a section of Honors Research pose before the symposium commences. These students designed their own year-long experiments based on their own interests and passions. Photo courtesy of Seana Duffy-Reddy '17.

Inspiring, creative, passionate — this is how sophomore Lola Wolf would describe the annual student STEM Symposium in three words.

The event, which took place on Saturday, May 13, was a culmination of months of research, hypotheses, experimental design and testing. Finally, students enrolled in Archer’s Honors Research classes had the chance to share their findings with the world. Students from the Buckley School, Flintridge Sacred Heart Academy, Viewpoint School and the Webb Schools were also invited to participate.

In her introductory remarks, Head of School Elizabeth English said that the mission of the symposium was to “celebrate the capacity of girls in science, technology, engineering and math.”

“We know that some of our world’s most pressing problems — droughts, hunger, poverty — will be solved by [people in] the STEM fields, and we need women at the table,” English said.

Following these remarks, presenters and guests listened to a keynote presentation by Tracy Drain. Drain is a flight systems engineer at the Jet Propulsion Laboratory, and currently serves as a Deputy Chief Engineer on the Juno mission. She emphasized her struggles in school, and encouraged the audience to pursue their passions.

“Honestly, I saw a role model in her,” Wolf, who shared her research at the symposium, said. “I think [seeing] someone who’s passionate about what she does, and not afraid to admit to some bumps along the way — which I’ve seen very frequently within the class itself…was really inspiring to me.”

The students then presented their findings to peers and industry professionals.

“[Seeing the other] presentations was probably one of my favorite parts,” Wolf said. “It was so inspiring to look around me and see all of the incredible things that we’ve been doing.”

Wolf reflected on the “long process” that has led up to the symposium.

“It’s taken us the whole year to come up with the products that we have,” Wolf said. “In the beginning of the year, it’s all researching and trying to find a problem that really interests you, and eventually developing that…Then, putting all the methods together that you need…it’s a very long, crazy process, but it’s a lot of fun as well.”

After the event, the 2017 RISE Award winners were announced. The judges first evaluated written research papers and selected eight finalists. These finalists were asked to present to judges during the symposium. Sidney Velasquez ’19 was the winner of this year’s award, with runners-up from Buckley and Webb.

“I was just excited to be a finalist and didn’t expect to win anything from it,” Velasquez wrote in an email interview. “[When I found out,] I was overcome with emotion to think that the work I had spent my entire year dedicating my time and energy to was being recognized.”

Velasquez’s research tested the effect of certain antioxidants on the growth of mesenchymal stem cells in chick embryos.

“It was an unbelievable experience,” Velasquez wrote. “I’m so appreciative of everyone who helped me get to that point, especially Ms. Shohfi.”

Wolf echoed Velasquez’s comments, also expressing appreciation for both the support of faculty and the opportunity to take the course. When asked what she would say to interested students, Wolf responded, “Do it.”

“There is so much independence and so much trust in your own work,” Wolf said. “You have so much room to be creative and really do whatever you want.”

Correction: The original version of this article stated that Buckley and Webb were represented at the event. This has been corrected to include that students from Viewpoint and Flintridge Sacred Heart Academy were also in attendance.