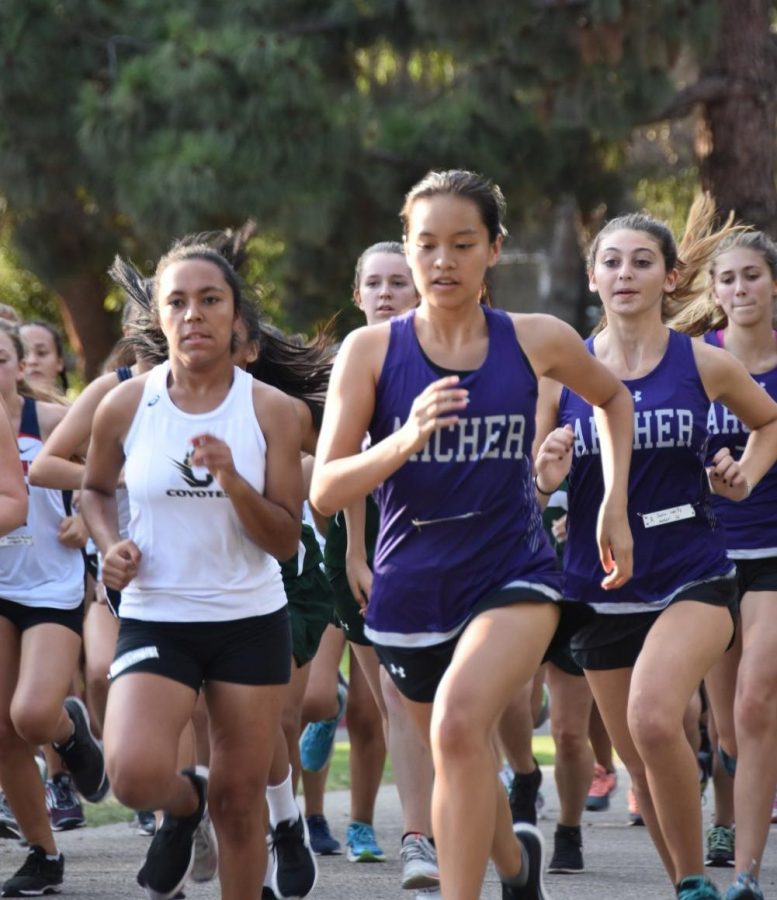 Caitlin Chen '19 leads the Archer runners in a meet. Followed behind her is Sara Weitz '18 and Lily Horton '18.

With heavy breaths, soaring legs and the sun hitting their backs, runners raced to cross the finish line at Cheviot Hills Recreation Center. Archer’s varsity cross country season started in August, and the team finished their regular season last week. The Panthers are currently preparing for CIF competition to wrap up an especially hot season.

Caitlin Mosch ’18, a co-captain along with fellow seniors Sara Weitz and Lily Horton, has been running cross country since junior year.

“As a team captain, you just have to motivate everyone to keep pushing through everything that happens,” Mosch said. “[The season] started off pretty rough,  but I think we have become a lot stronger as a unit and become a better team as a whole. A lot of people started off as new cross country runners and [have] definitely improved themselves.”

During October, Southern California experienced a heat wave, and temperatures were above 100 degrees on multiple occasions. This led to the cancellation of varsity’s second to last meet at Balboa Park on Oct. 26.

Caitlin Chen ’19 said that practices were cancelled due to extreme heat.

“We have extensive runs that are typically three to four miles long,” Chen said.

“Especially with the heat, we have had to make sure we are really following safety protocol,” Mathis said. “It was 112 degrees at Balboa Park,…and it’s really affected the girls. Every year it’s hot, but this year in particular is a lot warmer.”

The team will wrap up its season at the CIF meet which will occur on Saturday, Nov. 11. Nine runners qualified for the meet.