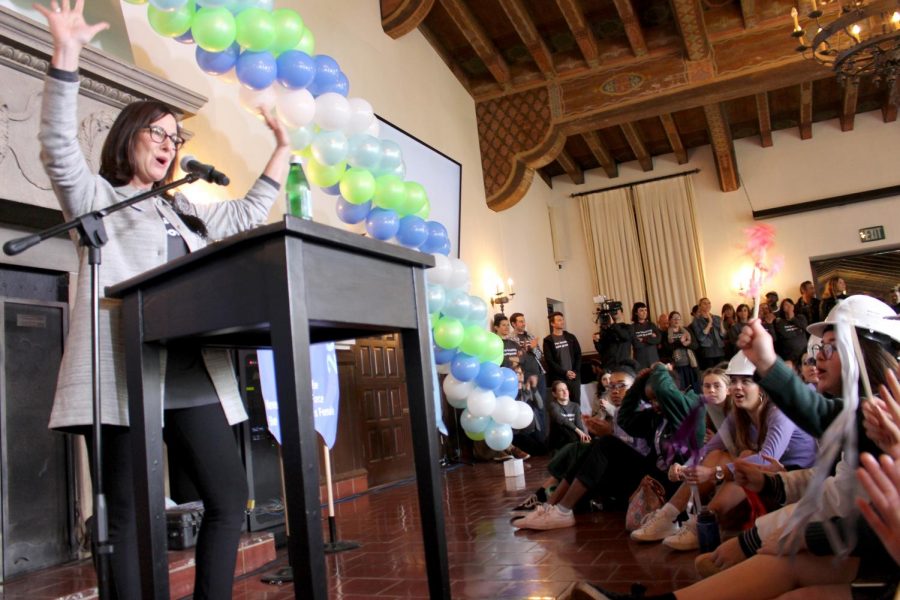 Head of School Elizabeth English cheers while delivering her speech during the Groundbreaking Ceremony. The ceremony was postponed until after Winter Break due to the Skirball Fire.

On the first day back from Winter Break, the hallways weren’t filled with the usual sea of uniform white polos and black skirts. Instead, students modeled hard hats and light blue and purple shirts with the message: “I am breaking new ground.”

The event, initially scheduled for Dec. 8, was postponed due to the Skirball Fire. Originally planned activities included a student parade and a rock ceremony, where students could place decorated stones in a hole that would serve as the foundation of the Academic Center.

Since the physical groundbreaking happened before the celebration, the community could no longer partake in those activities. Instead, the decorated rocks can be found in the Classroom Village.

Due to heavy rain, Monday’s ceremony was forced to move indoors from the Courtyard. The cramped Dining Hall only accommodated upper school students and faculty, while the middle school watched in the Rose Room via a livestream.

“Fire, Rain — nothing stops an Archer girl from breaking ground,” English said in her speech.

English expressed her excitement for Archer’s future with a new campus. She views “a beautiful school” as a “gift” from one generation to the next.

“[Schools are] an acknowledgment that our hope as a society lies within our children’s capacity to become thoughtful, ethical, contributing adults,” English said. “Schools are, in essence, the most important buildings that we build.”

Jameson emphasized that although the historic campus was never built for the purpose of education, the Academic Center has been designed for exactly that.

Marshall, who is an Archer parent (Lili Marshall ’15 and Meghan Marshall ’17), described how he looked forward to “seeing the smiles and hearing the laughter” whenever he visited the school. He shared that this sense of community is why he decided to lead the effort to provide girls with the facilities they “need and deserve.”

“I felt like I was at home,” Marshall said. “[Archer is] an atmosphere that [is] so joyous, but was also ambitious.”

To conclude the ceremony, Raucher and Thompson called up juniors and seniors with younger Archer siblings to stand beside them. They expressed their hope for the future of younger generations of Archer girls to come.

“While we will not get to directly use the facilities, we know our younger sisters, who will learn in the new space, will impact our lives one day,” Thompson said.

After the celebration, Fresh Lunches provided students with pizza and cookies with the new Moving Archer Forward logo.

According to Director of Communications & Strategic Marketing Quyen Ngo, the communications team is launching the “Moving Archer Forward” campaign to keep everyone updated on the construction through social media.

Ngo, who also helped plan the ceremony, thinks it is important for the community around Archer to stay informed on the construction process and continue to celebrate the school’s accomplishments.

“The community around us should be proud of the fact that Archer has only been around for 23 years, and look how far we have come,” Ngo said. “But really, [groundbreaking is about] just taking a moment to say ‘Wow here we are. It is happening. It is real, and we’re going to move forward.'”

To learn more, watch Archer’s video of the celebration, and click on the photo gallery below.