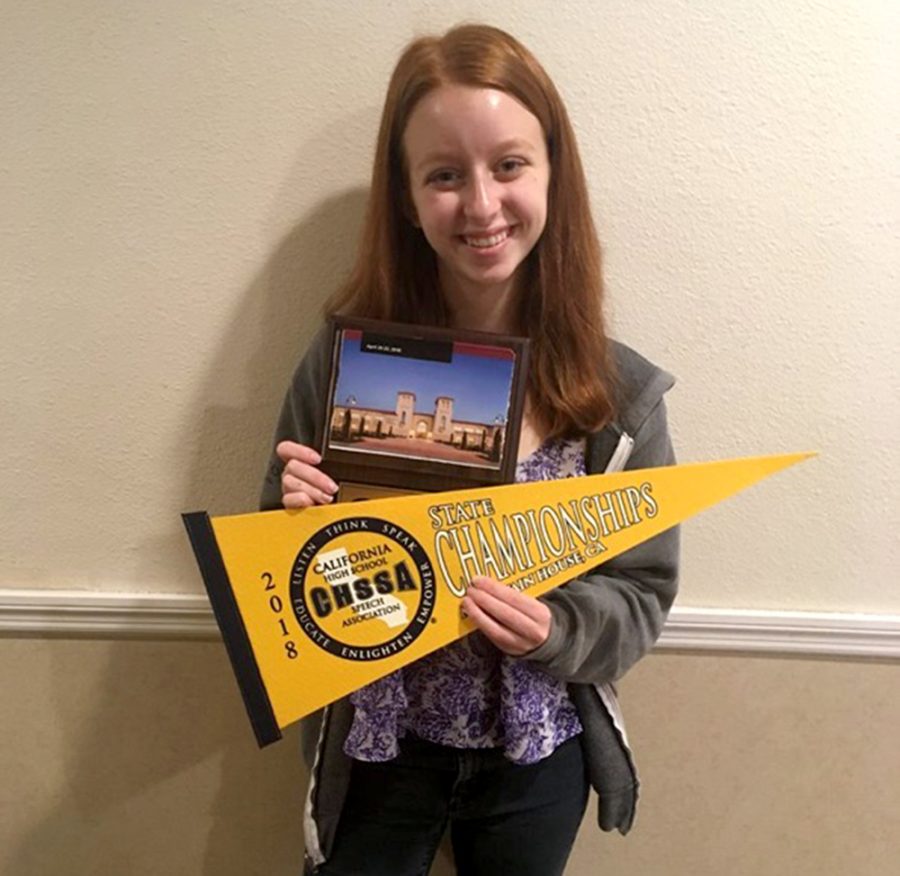 Anna Brodsky '20 poses with awards at the California High School Speech Association tournament. Brodsky ranked among the top 60 in the entire state. Image courtesy of Brodsky.

In a tense political climate like modern America, is it important to partake in bipartisan political discourse?

For Anna Brodsky ’20, the answer is an emphatic yes.

Brodsky tackled this topic in her original oratory speech, which qualified her for the California High School Speech Association‘s 61st State Championship Tournament on April 21 and 22. She finished in the top 60 out of nearly 300 from across the state.

According to Dean of Students Jenn Babin, Brodsky is the first Archer student to qualify for the Speech Association’s state-wide tournament since Babin joined the faculty seven years ago.

Brodsky researched and wrote her 10-minute speech, which was intended to persuade the audience to engage in bipartisan political discourse, earlier this school year.  Since writing it, Brodsky has traveled to various regional tournaments, where she has presented the speech before judges.

“I compete in original oratory, so you write a speech on whatever you want,” Brodsky said. “I wrote mine on political polarization and how social media has contributed to that. Due to the rise of online filter bubbles and echo chambers, people are becoming less and less exposed to other political viewpoints. So my speech explained how important it is to break free from those bubbles and engage with others, even though we might not agree with their political perspectives.”

Similar league events took place across the state, and the top finishers all met in the state-wide tournament.

“[The state-wide tournament] was a super cool experience because our team goes to a lot of local tournaments. People are very talented in the Los Angeles area, but we see the same speeches over and over again. At a certain point, you reach a threshold where there’s not more you can learn by seeing the same speeches again and again,” she said. “It was a really amazing opportunity to get to see other people’s [speeches] from around the state. I learned so much by being exposed to all the different styles of speech.”

The tournament was held at Mountain House High School near Tracy, California.

“Because I was the only person from Archer to go, I drove with Schurr High School [from Montebello, California],” Brodsky said. “We went through fields for five hours.”

However, Archer’s speech program is growing.

“About 15 of us are on the team,” Brodsky said. “One of the reasons I was so surprised to qualify for state is that this is the first year Archer has actually had a speech program. In the past, it has been debate only.”

Bear Allen-Blaine, the debate coach, introduced speech to Archer’s team this year. Brodsky said that Allen-Blaine did speech herself in high school, so she helped implement a program at Archer.

“[Speech has] been amazing,” Brodsky said. “Before, Archer competed mostly in public forum debate, which is two-on-two and focuses on public policy. I liked it, but speech just opened my eyes to the different types of public speaking I can explore.”

Although Brodsky’s season is now over, she is looking forward to next year.

“Especially considering this is our first year ever having speech, I think in the coming years we can do really well,” Brodsky said. “[At state], I was taking notes on other events, and I’m hoping to bring that knowledge back to the team because the best of the best go to state. Everyone that’s there was super talented. I just want to share the knowledge that I gained from watching those people with the team.”