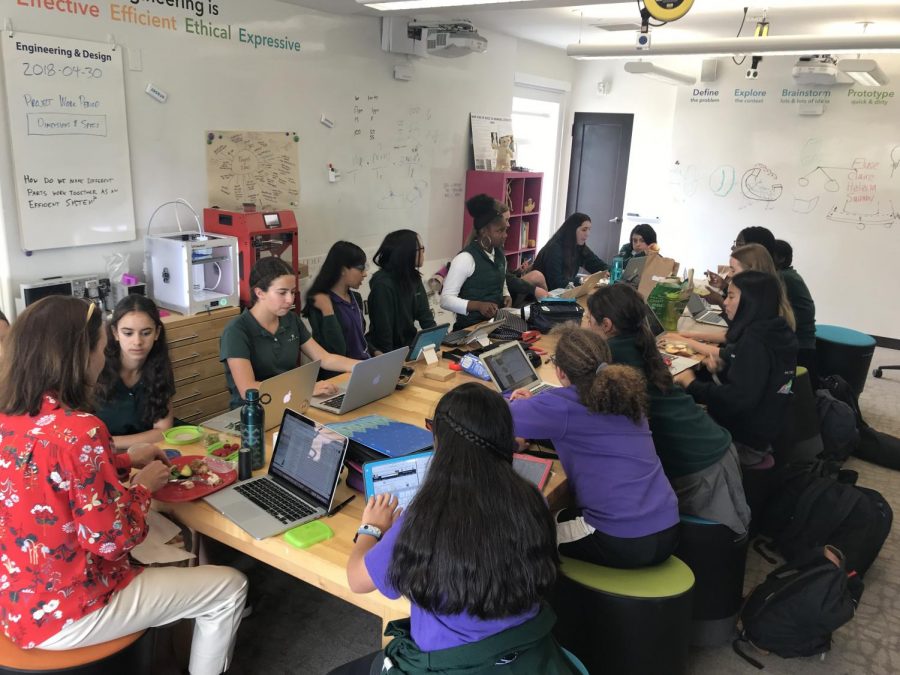 The InvenTeam works on their proposal in Spring 2018. The team includes girls from all grades.

Students filled the IdeaLab on Oct. 16, 2018, each of them a part of an organization that aims to alleviate global issues through invention: the InvenTeam.

To create an invention, students of all different skills have a place on the team, senior and the InvenTeam club leader Lola Wolf said.

“[You can be on InvenTeam] whether you’re…an expert in math, or engineering, or you just like making posters,” Wolf said. “There’s a spot for you on the InvenTeam, doing whatever you want to do, and, of course, stretching yourself and challenging yourself as well. But, really, it’s for everyone.”

Engineering and Design Coordinator and InvenTeam advisor Mike Carter said that students use their “passion” to help with world issues.

“[It’s] really important for students to realize that there are so many ways to help on these major global problems,” Carter said. “I think something we did really well was that we involved the whole school in our survey to find out what mattered at the time.”

In 2016, the InvenTeam won a grant from The Massachusetts Institute of Technology [MIT] for their invention. Carter explained that this is the second time that InvenTeam has been selected as a finalist.

“I believe we’re the first team that’s been awarded that has also been selected as a finalist again,” Carter said. “[It’s] pretty neat.”

However, Carter said that the InvenTeam will continue developing their invention regardless of MIT’s support.

“The board is committed to support this project. So we are going to…be working with the local community [and] with other organizations to really bring this project to fruition,” Carter said.

The InvenTeam is currently working on a project that InvenTeam member Stephanie Harrison ’24 called a “transformative” garment.

“[The invention] can be a jacket, a tent [or] a sleeping bag with an inflatable mattress,” Wolf said. “We’re working on something that’s multi-purpose, and just has all sorts of functions that can potentially aid people who have been displaced.”

The InvenTeam students said they were “inspired” by the recent wildfires and plan to use their invention to help with both homelessness and natural disasters, such as Hurricane Maria in Puerto Rico.

Harrison said that InvenTeam has made her believe that she can “change the world.”

“[InvenTeam has] given me a fresh perspective on my life and the world around me,” she said.

Wolf echoed this sentiment, saying that InvenTeam has made her analyze the news in a different way.

“Whenever I hear about problems on the news I think, well, I have the ability to potentially make a difference in the lives of these people,” Wolf said, “due to my experience on the InvenTeam and because I’ve developed these skills.”