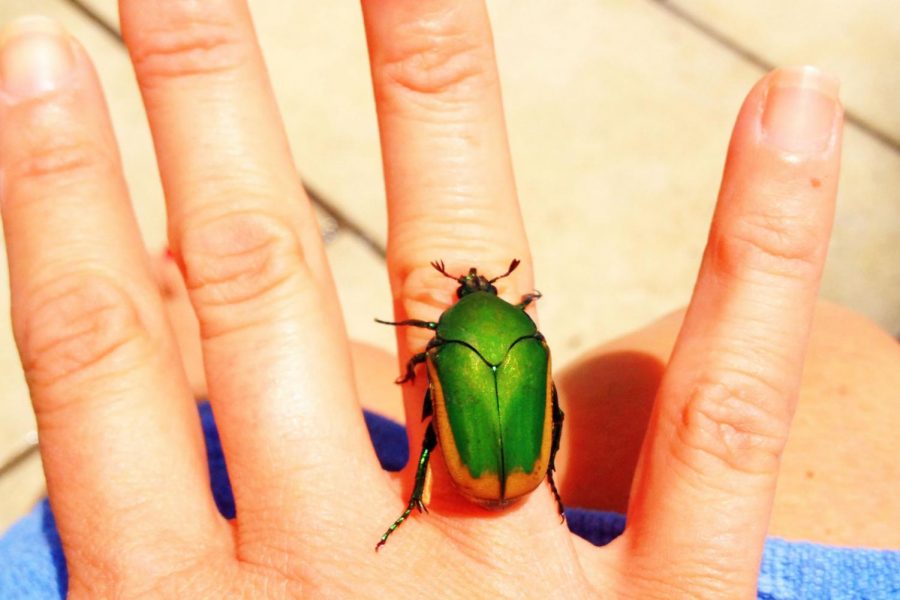 A Figeater beetle lands on a hand in eighth grader Remi Cannon’s backyard. This Figeater was found in her backyard. While many people find them scary, the Figeater beetles pose no harm to humans. Photo illustration by Nicole Cannon.

It’s a quiet afternoon at the Archer School for Girls. Suddenly, shrieks echo through the halls. Terror and chaos spread across campus like wildfire. Students run and teachers cower in fear. A shiny green figeater beetle has struck again.

I’d like to quickly clear up some beetle identity issues. Green figeaters are mistakenly referred to as June bugs, but green June bugs are a separate species (Cotinis nitida) that reside in the eastern United States. Green Figeaters are not as destructive as green June bugs and are not considered major pests.

Figeater beetles (Cotinis mutabilis) spend their days looking for soft-skinned fruit — grapes, peaches and figs — to chow down on. Now that it’s November, figeater beetles are a rarer sight, but they will emerge again in the spring when the weather is warm and fruits are ripe.

Unfortunately for those with a fear of insects, figeater beetles are notoriously clumsy: earlier in the year, I witnessed a beetle get tangled up in a horrified student’s hair. Around the halls, I have heard people falsely chalk up their clumsiness to blindness, but that is not accurate. To put it nicely, figeaters are aerodynamically disadvantaged due to their bulkiness.

The Bee Movie states: “According to all known laws of aviation, there is no way a bee should be able to fly. Its wings are too small to get its fat little body off the ground. The bee, of course, flies anyway, because bees don’t care what humans think is impossible.” Replace bee with figeater beetle and you have an accurate statement.

Another feature that ups their fear factor is the buzz they make in flight. Their buzzing is caused by laziness. Beetles have two sets of wings: the elytra and hind wings. Elytra are essentially wing covers. Most beetles lift their elytra while flying, but figeater beetles seemingly just don’t care. Instead, they stick out their hindwings from underneath their elytra, causing the buzzing sound. They could lift their wings if they wanted to, but that just wastes too much energy (in their opinion).

Figeater beetles are feared because they are lazy and clumsy, but they are truly trying their best to not bump into you. Their beetle heart harbors no ill intent (unless you are a particularly soft fig). Remember, there’s no need to scream when you see a figeater buzzing around the courtyard. Maybe you could even try befriending one or two.