Review: In ‘Joker,’ mental illness is no laughing matter 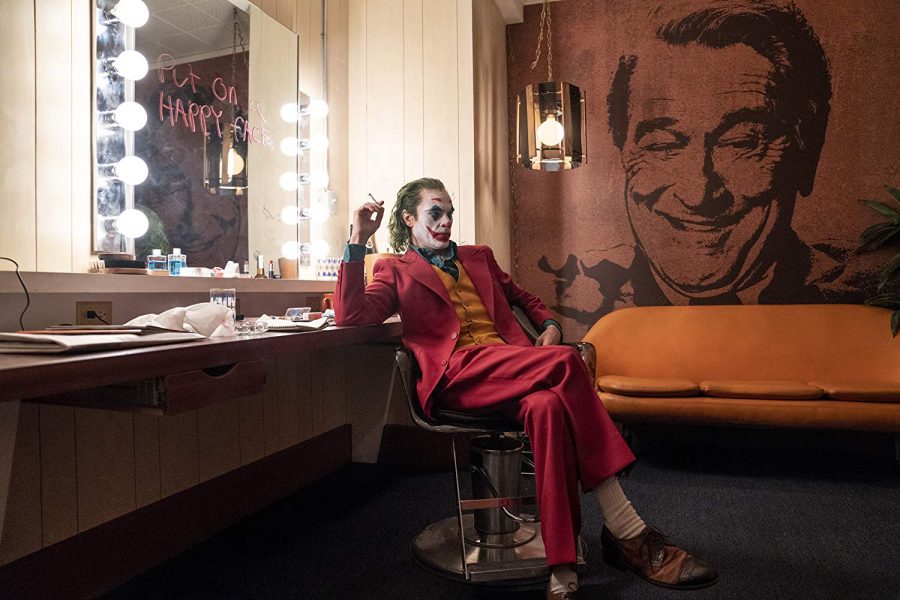 Arthur Fleck (Joaquin Phoenix) prepares for his first television appearance in "Joker." The film sparked a heated debate on the media's treatment of mental health, gun violence, and other issues, but ultimately was attempting to dramatize our society rather than glamorize these topics. Photo courtesy of "Joker promotional materials.

Disclaimer: “Joker” is rated R for violence and bloodshed, strong language, and sexual references; it may include triggers for people sensitive to mental health, gun violence or references to abuse. The Oracle does not recommend the film for our younger readers, and Common Sense Media estimates it is appropriate for ages 16+.

In a grimy beige dressing room, a lonely Arthur Fleck (Joaquin Phoenix) stares into a mirror. He uses his fingers to pull his lips into a forced smile while tears streak his face, which is painted with white, green and red clown makeup.

The rest of “Joker,” a film recounting the early years of the famous Batman villain, is just as devastating and macabre as its opening shot. Producer Todd Phillips takes the director and writer’s helm in the film, which was released on Oct. 4, 2019.

“Joker” immediately stirred controversy due to its treatment of issues like mental health, gun control and involuntary celibate culture. The film was criticized by viewers and critics alike, who often cited its style as overly violent and nihilistic.

The first scene displays the Joker in his most famous form. But the narrative begins with Arthur Fleck, a lonely, lower-class aspiring comedian with a job as a clown. Arthur is also socially isolated by his mental condition, which compels him to laugh hysterically whenever he feels uncomfortable or upset. Throughout the film, Arthur attempts to find meaning in his life. He investigates wealthy Gotham families to try and understand his past and books ill-fated comedy gigs to try to change his future.

As the story unravels, Phoenix’s quirky loner character slowly devolves into madness, paralleled by the movie’s narrative, style and shots. The beginning of the film showcases a fairly plain Arthur walking through a filthy grey Gotham city to his court-ordered psychiatry appointments. At this point, the only mark of his future villainy is his sinister laugh (which Phoenix executes perfectly). However, even this Joker trademark is out of context and repressed at the beginning of the film. As the movie goes on, blinding color and less dialogue parallel the character’s downward spiral into complete isolation and expression of psychopathy (a psychological symptom characterized by lack of empathy, leading to manipulation and chaotic behavior).

It is this aspect of the Joker that caused the movie to be simultaneously acclaimed for its expert artistry and criticized for its treatment of mental health. Viewers argued that having a mental illness or a dark past does not necessarily mean someone will become violent and detached as the Joker does. Furthermore, Arthur’s loneliness extends to his romantic life, causing him to stalk women or imagine encounters with them.

While both of these points are valid, Joker must be viewed as an extreme and a satire. The film was not trying to comment on the nuances of mental health because the Joker as a character is quite one-dimensional. Rather, it is trying to illuminate the ills of our welfare system and how it fails underprivileged people like Arthur. Arthur himself is multifaceted,  but his socioeconomic position denies him help and understanding, and eventually turns him into the unequivocally violent monster we know from DC comics.

This sentiment is best expressed is one of Arthur’s lines, expertly delivered by Phoenix: “What do you get,” Arthur says, “when you cross a mentally ill loner with a society that abandons him and treats him like trash? I’ll tell you what you get! You get what you f*****g deserve!”

As for Arthur’s behavior towards women, it was his obsessive and unrealistic relationship with his neighbor Sophie that showed me the first traces of his dangerousness. Arthur first stalks Sophie, who is presumably a single mother. In the film, she sees this as flirting, and they go on several dates. Consensual sex between the two is implied.

However, towards the end of the movie it becomes clear that this entire romance was in his mind; Sophie doesn’t know who he is. When he accidentally enters her apartment, she begs him to leave and mentions her daughter sleeping in the other room. It is unclear what follows, given the next shot is Arthur stumbling out of the apartment. However, his fantasizing is implied to be perverse. This moment showed me how mentally unstable truly was. When he enters her apartment, she is the victim, and he has become the villain.

There is also some commentary on guns and violent protest. Arthur’s coworker gives him a gun despite his assertion that he is not allowed to have one, and he uses the weapon on his first victims, young stockbrokers. This gruesome murder sparks a revolution among the urban poor, causing them to use “the clown” as a symbol of rising up against oppression. Eventually, these demonstrations turn violent and riotous. Although these are serious topics, the storylines are meant to be over-the-top to prove what can come from the politically charged and highly stratified society we live in today.

Ultimately, Joker is a film about someone who experiences loneliness and desperation — emotions we all sometimes feel. However, Arthur’s feelings and predispositions to mental illness  are exacerbated his situation. His professional failure, his misunderstanding friends and family, but most of all his lack of access and desire to get help for his condition turn him into the Joker caricature we know.

In fact, “Joker” is more about how we as a society need to change to better support people like Arthur. It is not trying to tell us Arthur’s trajectory is inevitable.

“Joker” is currently showing in most major theaters, including most Cinemark, AMC and Arclight locations.