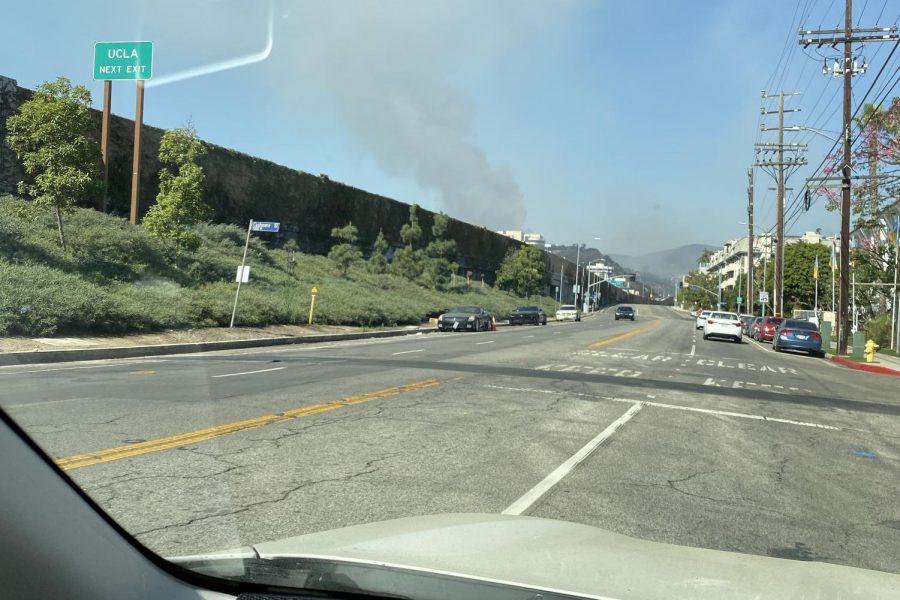 The Getty fire, as seen driving on Sepulveda Boulevard, burned 745 acres. As wildfires become more and more common, it is important that we do not normalize the destruction they bring.

The front door of my house opened. My dog barked as my eyes fluttered and the intense smell of smoke wafted into my nose. As I groggily got up, I learned that my parents’ friends were seeking refuge at our house after the Getty fire forced them to evacuate. I wish I could say this is a rare occurrence. But for many Angelenos living in canyons, evacuations are not unusual during fire season.

The hotter and drier the world gets, the easier it is for fires to start up. California’s annual wildfire damage increased fivefold, likely driven by drying of fuels created by human-induced warming, the Advancing Earth and Space Science organization said. According to the National Weather Service, 90% of fires are caused by humans.

Climate change is not the only reason for the spike in fires. In 2019 alone, 10 wildfires broke out across California. Last week, during the Getty Fire, the biggest issue for containment was the extreme red flag winds. Winds up to 80 mph had the potential to spread embers across vast distances. It was so extreme, meteorologists couldn’t remember a time when they gave this warning.

According to climate scientist Daniel Swain, there is a big mass of high air pressure over Alaska (which has unusually warm temperatures) and there is no sea ice on the Arctic Ocean coast for the first time in October. This air mass contributed to the extreme Santa Ana Winds.

No matter the cause of the wildfires, there is a striking growth in the number of fires — and they are only expected to increase. With this upsurge, there is a new normalization of fires. A new day, another fire. I mean, it’s typical, right?

No. No, it is not normal. It is scary. The generations before me did not worry because the fire season was rare and short-lived.

New England has snow days. Now, we have fire days. When driving on the freeway, I often see the ashy smoke in the distance. My immediate thought is, “It’s just another fire.” That is disturbing. My brain is hardwired to recognize wildfires as a part of everyday life, rather than a natural disaster.

We post on Instagram and Snapchat, wish those affected all the best and move on with our lives, but no social media post can make up for the loss of a home or a life due to a wildfire.

So where do we go from here? Fires are happening more frequently than ever, so how do we refuse to accept them as ordinary?

Wildfires are dangerous. They are real and they are getting worse. Just like my parents’ friends, countless people’s lives are uprooted due to these devastating natural disasters.

We need to acknowledge fires with the utmost seriousness. Another fire is not just another fire. It is someone’s home burning to the ground, embers flying through the city. It is years of lost memories. It is ruptured ecosystems. It is lives torn apart.