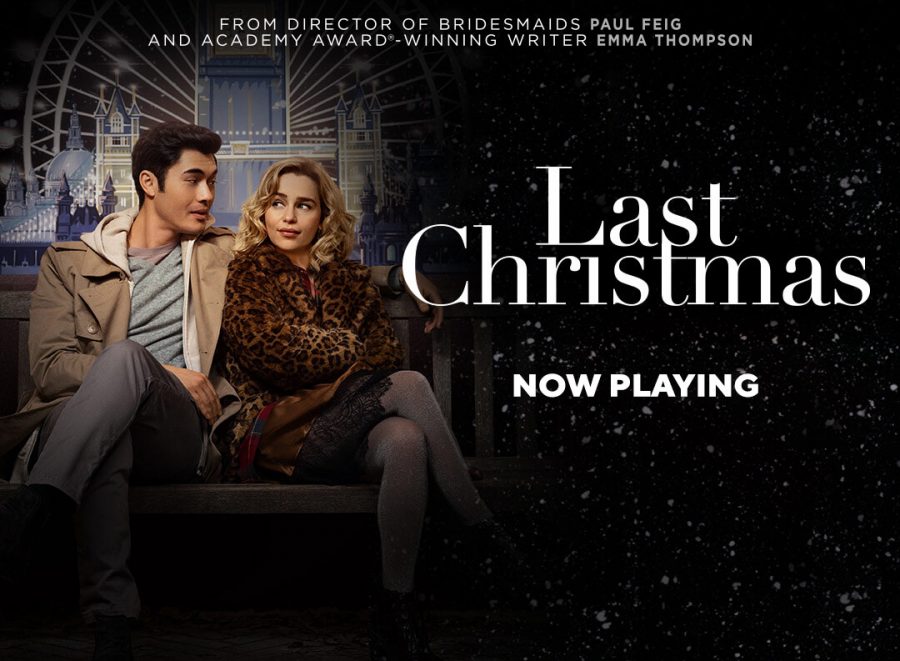 Last Christmas is a holiday rom-com with a twist. The film was released by Universal Pictures and stars Emilia Clark (Game of Thrones) and Henry Golding (Crazy Rich Asians).

As the holidays approach, twinkling lights cover buildings, Christmas songs fill the air and, of course, cheesy and overdramatic holiday movies fill theaters. Even as a Jew, Christmas remains my favorite time of the year, so naturally, I try to see all of the holiday movies and listen to as much music as possible to get in the cheery holiday spirit. One of my favorite ways to feel festive is listening to Wham!’s “Last Christmas,” which was released in 1984 and was written by George Michael.

George Michael’s iconic song is heavily featured in “Last Christmas,” a romantic comedy directed by Paul Feig that was released on November 8. Being a combination of two of my favorite holiday traditions, I dragged my best friend to the theatre opening weekend to see the film. But this rom-com is not your typical heartwarming holiday movie.

The story follows Kate (Emilia Clarke), a frustrated, self-loathing George Michael super-fan who works at a dead-end Christmas store in London and is currently homeless. One day, she encounters a man outside of her shop named Tom (Henry Golding) and is immediately intrigued by him.

Soon after their initial meeting, Kate runs into Tom again, only causing Kate’s feelings to develop further. As the two continue to spend time together, Kate reveals that she has been ill, but Tom is not as open about his past as she is. Tom helps Kate to learn to love herself and have a positive outlook on life again — she even starts volunteering at a homeless shelter on a frequent basis. But Tom disappears for days at a time without explanation and does not provide a phone number or any form of contact for Kate. She begins to realize he may not be the person she thinks he is, yet his influence on her once-negative attitude remains.

The first half of “Last Christmas” fulfills everyone’s desire for a cozy, love-filled Christmas movie, but that feeling does not hold to be true as the film progresses. Sure, the film does successfully highlight Kate’s journey to self-love, along with resolving her family’s conflicts, but the chemistry between the two love interests, Kate and Tom, is lacking and an unsettling plot twist late in the movie leaves viewers confused.

The best part of the film was the production quality. Visually, the film presents various appealing images, such as the year-round Christmas shop that Kate works in and a grandiose ice skating rink decorated with a chandelier. Although it may be well-produced, the plot does not uphold the quality of production.

The stars of the film both successfully adopt their characters’ personalities, the actors display extremely little connection in what is meant to be a romantic relationship. Golding is successful in presenting his character as mysterious, never truly giving any insight into his personality or history (which gave me the same feeling a serial killer would in an episode of “Criminal Minds”), while Clarke successfully expresses Kate’s lack of motivation and desperation for attention.

About halfway through the film, I began to feel like Kate and Tom’s relationship (which really felt more like a friendship with some uncomfortable flirting) was not progressing as romances typically do in romantic comedies. I felt like I was missing something. And while their individual character traits make sense by the end of the movie, the nature of the relationship and plot twist left me feeling extremely confused and disturbed.

The film takes George Michael’s iconic song to its most literal meaning, with a twist no one can predict as they sit down in the theatre. In the end, this rom-com is neither romantic or comedic.