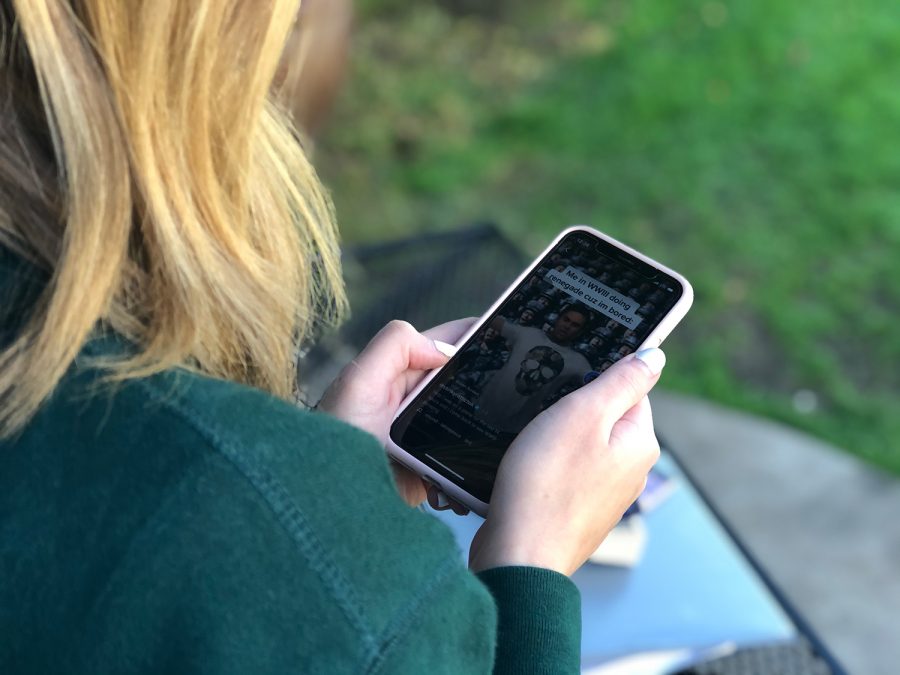 Sophomore Lauren Robson scrolls through TikTok and views a #WWIII video. After the conflict between the U.S. and Iran these videos went viral.

After Iranian General Qasem Soleimani was killed by an airstrike on Jan. 5, tensions between the U.S. and Iran rose in the media; many videos and memes infested the internet. People categorized all these videos into one hashtag, #WWIII. One day, I was scrolling through TikTok, as many teenagers do, and I came across at least 20 videos all about #WWIII. These TikToks are highly offensive, and some I saw contained false or misleading information.

Although people may use humor as a coping mechanism when dealing with tragedy, depression or disturbing images, the memes cause more harm than laughs. The memes are also posted on popular social media platforms, which means large amounts of people are viewing these images without personal knowledge of the creator’s intent.

They also perpetuate gender stereotypes. Many of these videos talk about how women are “safe” from World War III because they will stay at home cooking and cleaning, reinforcing the sexist ideologies of the past. Women in the military already face bias and prejudice; these memes create the false impression that all women want no part in war.
@cutiecarynwar? whats that? i only know cooking and cleaning 🧚‍♀️🧹✨ #ww3♬ ww3 be like – issywaha

The videos are also feeding into Anti-Arabism that is already present in our country as well as social media. One even made fun of traditional Arab folk dance. These videos could reinforce the gender and Muslim stereotypes of TikTok viewers.

The memes are completely desensitizing the political relations between Iran and America; people do not understand the potentially devastating impacts of war, so they make jokes about heavy topics in an attempt to gain likes or views. It has fueled an environment that makes dark humor acceptable. Although I understand the notion of using memes as so-called therapy, researching the issue would likely be a better way to quell anxiety. After all, even immediately after the attack, foreign policy experts concluded that the likelihood of an all-out war with Iran was low.

By labeling these memes as humorous, they are deemed as acceptable. Not to mention that many children under the age of 13 are on TikTok, so even if these videos are intended for older audiences, young people are still influenced.

Unfortunately, there is no direct solution. TikTok and social media cannot filter out mass amounts of videos that are hurtful and offensive. According to TikTok’s community guidelines, TikTok, “define[s] dangerous individuals and organizations as those that commit crimes or cause other types of severe harm.” However, racist and hateful memes do not meet TikTok’s threshold for removal.

I think that the solution is education. Schools should talk about current events so at least students will be informed about important issues and understand their weight. No, it might not stop all students from posting these memes, but it could make them think twice before pushing the publish button. Hopefully, this could encourage people to be more digitally conscious when it comes to what they post but also who they might be offending in the process.

These videos and memes will be on the internet forever, allowing for these sexist and racist videos to have an everlasting consequence and presence.