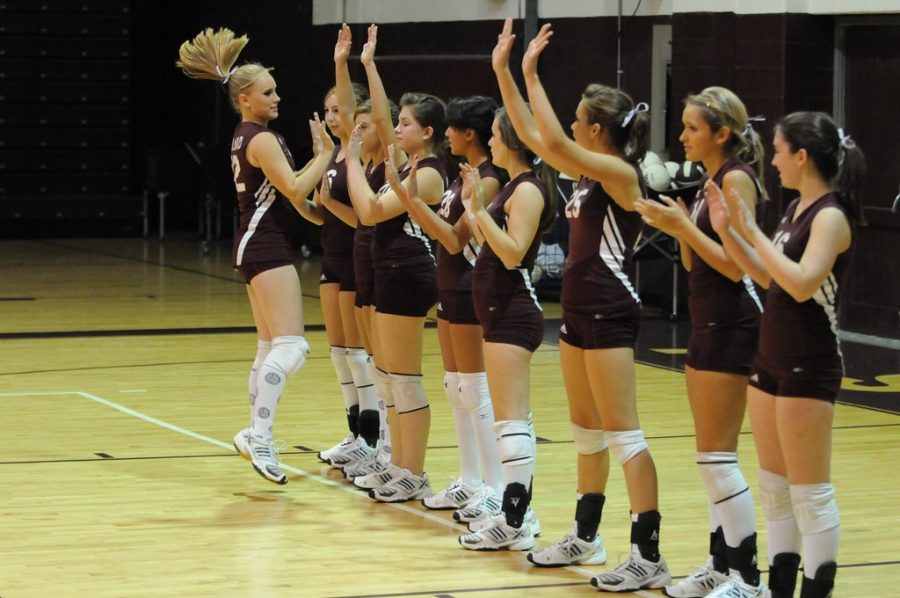 During the Ashland High School's senior night, one player high fives her teammates. Sports teach its athletes valuable lessons about teamwork. Some kids are unable to participate in sports because of the financial burden of competitive sports.

When I picked volleyball as my sport, I knew I wanted to be on a top team. In 2014, I joined Actyve Volleyball club. Ever since then, I have had access to the best coaches, best facilities and best opportunities in the area. We compete multiple times month in local tournaments and travel across the country several times a year for national tournaments.

Competitive travel volleyball comes with a hefty price tag of $9,000 to $10,000 dollars per year. Uniforms, flights and tournament fees are not included in that cost. Because I have been in the volleyball community since I was 10 years old, I have seen countless fundraisers and bake sales to raise money for the expenses. One of my camp friends even started her own graphic shirt company in hopes of making enough money to afford to play competitive volleyball.

High costs are not unique to volleyball. Sports such as lacrosse and equestrian also come with a hefty price tag. According to Money Crashers, the average annual cost of horse ownership is about $4,000 per horse. Only the wealthy can afford the cost of horse ownership paired with riding lessons, riding attire, boarding, vet fees and food.

After researching the average cost of several competitive sports, I have realized that almost every sport is expensive at a competitive level. Data from a TD Ameritrade survey of parents shows that nearly twenty percent of U.S. families spend more than $12,000 a year on youth sports per child. Pew Research Center‘s data shows that 84% percent of middle to upper class parents say their children participated in sports. By contrast, only 59% percent of lower-income parents say their children participated in sports. According to a national poll conducted by the University of Michigan, nearly one in five lower-income parents report high costs as the reason for taking their children out of sports.

Having sports that only the rich can afford not only furthers the already existent disparity between the lower-class and the wealthy, but also robs lower-class kids from rewarding athletic experiences. Sports teach kids the value of friendship and leadership skills, along with how to overcome adversity and failure. Sports have taught me how to work with others to achieve a common goal.

Lower-income students are not only robbed of valuable life experiences — they lack a valuable leg up in the college process. According to The Crimson, recruited athletes with an academic rating of four on Harvard University’s scale of one through six — with one being the highest and six the lowest — had an acceptance rate of 70.46%, nearly one thousand times greater than the 0.076% admit rate for non-athletes with the same academic rating.

So how can lower-income students have the same opportunities as their wealthier counterparts in expensive sports? Websites like The US News Report and Discover explore ways for lower-income families to afford high-priced sports. Suggestions include utilizing used equipment and making athletes take one or two seasons off per year.

Corporations can also do their part. Companies like Jamba Juice are known to sponsor club teams by giving the teams gear for a lower cost. This provides a win-win situation for the company and the players: The athletes spend less money on uniforms, and the company advertises their brand. Also, sports associations can put a maximum on club fees; some clubs are known to have significantly higher club fees than others, and, usually, the higher the club fees are, the better the team is. If a lower-income player cannot afford high costs, they are stuck playing with less skilled teammates. Setting a limit on club fees would foster more equity across teams in the league.

The problem is systemic, so small suggestions like these will not solve the issue. Competitive sports need to be accessible to all regardless of socioeconomic status, and until then, lower-income students will continue to be disadvantaged and inequity will remain within the athletic community.