Commentary: The Taal Volcano eruption reignited my pride in being Filipino 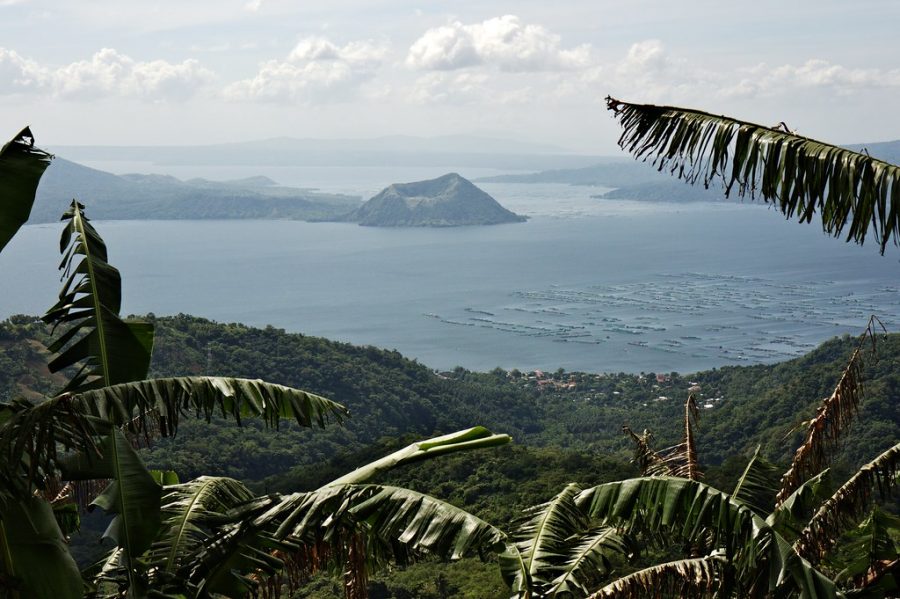 The Taal Volcano on a clear day in Tagaytay City in the Philippines. Seeing photos of devastation after the volcano erupted caused me to question my treatment of my Filipino heritage and why people like me and my family are so invisible in America.

In some sense, I live a double life. During the week, I speak with the standard Angeleno drawl, eat at Brentwood sandwich shops and study U.S. history. On the weekend, I visit my family in Anaheim and try to live the Filipina-American way; I eat at Jollibee, shop at Costco and listen to my grandma call my baby nephew taba (or fat). I was able to keep my two worlds starkly separate, and I liked it that way. But on a dreary Monday morning, scrolling through my Instagram feed, my mother’s Filipino ancestry and my American upbringing collided.

Although many of the estimated 376,000 displaced residents have returned to their homes, the country is still in shock after the eruption of the Taal Volcano on Jan. 12. Ash from the eruption still blankets Filipinos’ homes, workplaces and livestock in towns outside of Manila, the Philippines’ capital.

As I’ve gotten older, it’s become easier to push my mother’s Filipino blood aside. When you have never visited the country and hardly speak a word of the language, it’s easy to dismiss even your own culture as foreign. However, some sense of belonging was reignited in me as I scrolled through photos of the catastrophe. I saw my own family, and myself, in the victims’ faces.

Although sources are unsure how many were killed as a result of the eruption, the devastation was evident in towns of ashy gray and faces of worry and grief. Whole livelihoods were, within a day, choked by smoke and dust. Many residents, despite evacuation orders, attempted to return to their homes to salvage livestock, expensive electronics or photographs from the wreckage.

Even though some were able to reclaim their possessions, thousands of Filipinos have lost their livelihoods and will have to start their lives over. I thought about how so many people, my family’s people, could be without a home. My grandparents traveled to the U.S. in 1970 to start anew, but they still try to visit Manila for several months each year. The idea that people like them could be so completely lost, 80 years old without a home, made me realize how selfish it was to neglect a history that I have the privilege to share in.

America is where many Filipinos live, but to many of us, it doesn’t always feel like a home. Although she is half Pacific Islander, one of my cousins was born with blond hair and blue eyes. People used to assume her mother, born in the Philippines, was her nanny. I’ve been asked if I speak Spanish before, although Filipinos speak Tagalog. My mother and aunts have scars on their forearms, where they were vaccinated for smallpox upon entrance to the U.S. Many see this vaccination scar as a symbol of America’s dark history with Asian immigrants. It is often referred to colloquially as a “FOB (Fresh off the Boat) Mark.”

The Taal Volcano was not the first natural disaster the Philippines has weathered, and it certainly will not be the last. Although the country will try to remain strong through all that is to come, we must ensure, as a nation of immigrants ourselves, that Filipinos have a home in the U.S. as well.

We can’t characterize the Philippines or Filipinos by Spanish colonization, nor by the atrocities committed on islands like Mindanao. Our culture is not what the West made us. Filipinos are all around, but we’re often invisible. Disney Channel phenomenon Vanessa Hudgens, world-renowned songwriter and recording artist Bruno Mars and musician and Golden Globe-winning actor Darren Criss are a few of many celebrities of Filipino ancestry, but they are often cast or categorized as white or Hispanic. It often seems as though we are only recognized as a people when the country experiences a tragedy like the Taal Volcano eruption.

I don’t want to be invisible anymore. I want to embrace my islander heritage and try to more deeply understand the problems facing people like me, wherever in the world they may be.