Op-Ed: Why didn’t anyone talk about local anti-Semitic vandalism? 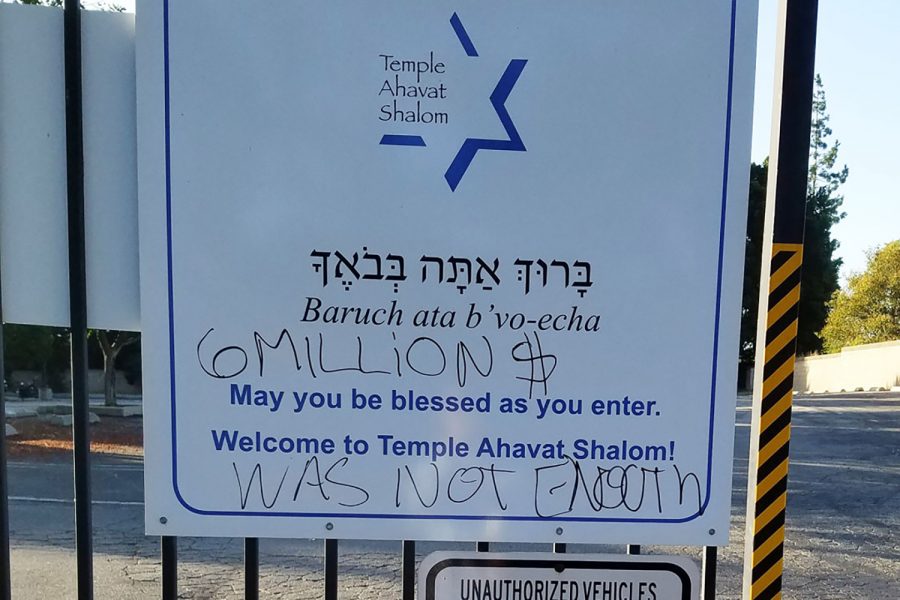 On Temple Ahavat Shalom's welcome sign, the phrase "6 million $ was not enough" was written in all capital letters.

I woke up on Dec. 18 to my parents discussing three instances of anti-Semitic vandalism in Los Angeles Jewish schools. According to the Haaretz, the schools were tagged in swastikas and phrases such as “time to pay.” When I came to school the day after the graffiti surfaced, no one was talking about it despite the fact that many  Jewish Archer students live near the schools that were targeted.

Los Angeles has the second-largest Jewish population in the U.S. —  617,480 Jews live in the Los Angeles and Long Beach area. It is difficult for my mind to grasp that even in a highly concentrated Jewish area, anti-Semitic vandalism is still happening. I was even more shocked when it seemed like I was the only Jew that had known about this.

I didn’t understand. Why weren’t Jewish people addressing or even encouraging a conversation? And then I realized — they didn’t even know it happened.

Only smaller Jewish online publications such as The Jewish News of Northern California, The Times of Israel, Forward and a couple of others were publishing and covering the events that had transpired on Dec. 18. So, of course, LA Jews weren’t conversing about the topic because no major news outlets covered the event.

My mother, who works as a Sales Director at the LA Times, sent information from a local blog about the incidents to the editorial board there in hopes that it would be covered. Sadly, they responded with, “That’s so sad,” and proceeded not to cover the events.

After my mom told me this, I was furious. I couldn’t believe that this heartbreaking event wasn’t getting the recognition it deserved. So I will recognize it and tell you why, although three months later, it is important to talk about events like these. Acts of hate deserve our attention.

First off, it is better to talk about it now rather than never acknowledging it at all. If an event is in the past, people may assume it loses all value and significance but this is just not true. For example, the Civil Rights Movement is important today because it serves as a reminder of societal growth and gives us hope for change.

Anti-Semitism is still on the rise in our political and social climate, increasing the importance of holding a place for a conversation. We cannot dismiss and push these hate crimes to the side. They need to be acknowledged.

Whether it is at the dinner table or at school, talking about it will increase awareness regarding the prevalence of anti-Semitism in L.A. but also across the world. Through that conversation, hopefully, people will feel inspired to speak up about issues that impact their own lives and the lives around them.