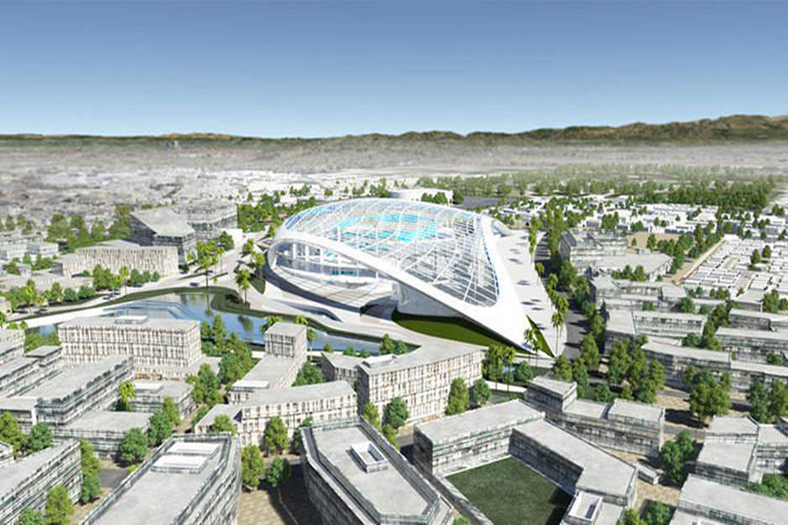 The vision for the Morningside Park area of Inglewood features a new stadium, the new Forum and a new shopping mall. The Los Angeles Clippers are also set to open a new stadium in the area. This artistic rendering of the stadium is on Mark Ridley-Thomas, Supervisor of the Second District's government website.

Residents of Inglewood are no strangers to the frequent construction in the city. A project including the reopening of The Forum and the construction of The Clippers Arena, the Hollywood Park Casino and SoFi Stadium has taken place with a goal of “revitalizing the community,” according to Inglewood mayor James T. Butts. The SoFi Stadium will be home to the Los Angeles Rams and Chargers and is located directly across the street from the historic Inglewood Forum. According to ABC News, The Clippers have invested $100 million dollars into the city of Inglewood.

The 298-acre $2.6 billion SoFi stadium is the first indoor-outdoor stadium to be constructed ever. It is slated to open in the summer of 2020. According to the SoFi Stadium’s site, “The state-of-the-art stadium re-imagines the fan experience and will host a variety of events year-round, including Super Bowl LVI in 2022, the College Football Championship Game in 2023, and the Opening and Closing Ceremonies of the Olympic Games in 2028.”

I have lived in Inglewood for seven years. When I first moved there, it was rundown. Most of the businesses in the area were closed and the streets were jagged. Over the years, I have noticed street paving and other small projects to make Inglewood more appealing. The opening of a brand-new stadium was very unexpected for me. Who would come to Inglewood for entertainment? People have always visited Inglewood for tourist purposes to visit iconic spots like Randy’s Donuts or Roscoe’s Chicken and Waffles, but those places are on the outskirts of Inglewood. Now, people have been coming deeper into the city to visit the new attractions. When the Eagles were the first act to perform in the brand new Forum, I realized that the change was happening quicker than I imagined.

My house is located directly next to the stadium. Whenever I get a car wash, the next day my car is covered in dust again. The constant dust makes living right next to the stadium difficult; we cannot open windows during construction hours without dust and dirt flooding our home.

Senior Hailey Adams, a resident of Inglewood, commented on how the construction of the SoFi stadium has affected her neighborhood.

“I think that it is a great opportunity for the city of Inglewood, but I also think there’s a lot of negative to it as well. Some people have been displaced or are still fighting to stay in their homes because of wealthy people buying their properties,” Adams said. “I think it is affecting the character of the community. While it is great that there are new people coming in, this changes the way people are interacting with the city. For example, Market Street is a historic part of Inglewood and most of the businesses are being replaced by businesses and shops that are appealing to the white people who are moving in.”

Sophomore Chidimma Nwafor lives about five minutes away from the stadium and said it has caused problems for her family.

“The SoFi Stadium has become a hassle because the Forum is pretty close. For me and my family going home sometimes is a hassle because the street gets really congested with traffic,” Nwafor said. “But I know that good things are going to come out of it and people are going to come to Inglewood. Inglewood is a mostly Black and Latinx community, so I feel like with people of different races coming, [some of the current residents] will be unhappy,” Nwafor said.

According to the US Census, Inglewood is 42% Black and 49.9% Latino. With the construction of high-scale buildings and companies in the area, I expected the number of white people in the area to increase, as it usually does with gentrification.

“I see all of these changes as a way to prep for the white people. I get excited because all of this stuff is coming to Inglewood and they’re so many options of things to do in the area now, but then it is also important to consider what this change actually means for people in the community,” senior Karis McCaskill said. “There is a mindset that if marginalized groups are displaced doesn’t matter, and that total disregard is unsettling. Also, the Rams are coming to Inglewood, but they are called the Los Angeles Rams.”

The displacement McCaskill is referring to is the housing shortage taking place in the area. Several residents have been evicted for unknown reasons, but it is speculated that it is because landlords want to make room for higher-class residents moving to the area.

According to CoStar, a commercial real estate company,  rents on Market Street increased by about 12.5% since the revitalization project began, as compared to the county-wide average of 10.5%.

The issue of gentrification is not only a problem for the city of Inglewood, but it is a problem across Los Angeles. Cities that bring color to Los Angeles through food and culture, like Little Tokyo and Echo Park, are also victims of gentrification. Mom-and-pop shops are being replaced by chain stores. High-rise buildings are replacing community centers and homes. Los Angeles is a great city because of its diversity. Without the character that ethnic enclaves bring, Los Angeles will become a homogenous city that lost its value due to gentrification.