Review: Netflix’s ‘Never Have I Ever’ perfectly captures high school adolescence in a unique way 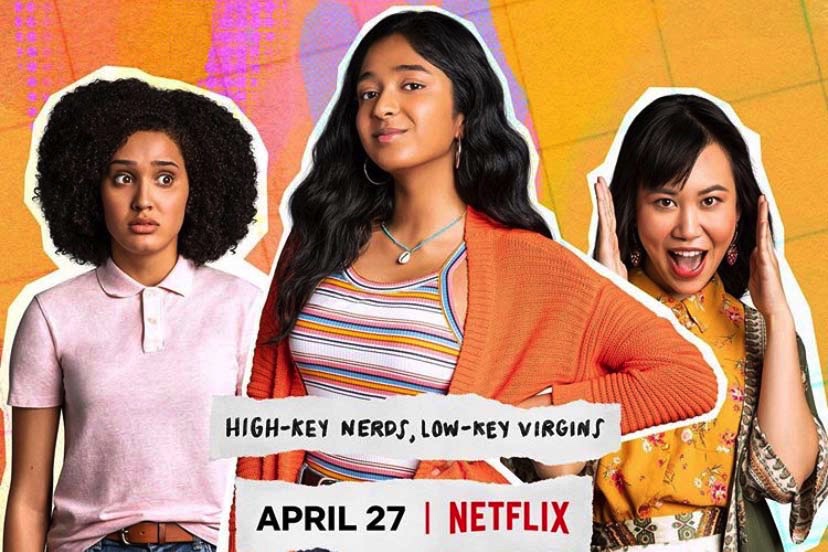 A promotional photo for the Netflix original "Never Have I Ever." The first season of the show premiered on April 27.

On April 27, Netflix released the first season of the original show “Never Have I Ever.” The show is rated TV-14 and was created by actress Mindy Kailing and writer/producer Lang Fisher.

This series follows first-generation Indian American teenager Devi Vishwakumar (Maitreyi Ramakrishnan) and her battle to reinvent herself after a traumatic year dealing with her father’s death and being mysteriously paralyzed for three months. Devi lives with her mother Nalani (Poorna Jagannathan) and older cousin Kamala (Richa Moorjani). The show is narrated by Devi’s dad’s favorite tennis player, John McEnroe.

The show features a smart and diverse group of three best friends, Devi, Eleanore and Fabiola, who are figuring out how to navigate high school. Eleanore Wong (Ramona Young), is a whipsmart theatre geek who is fighting for the lead role in the school’s upcoming play. Fabiola Torres (Lee Rodriguez) is a robotics nerd who is mustering up the courage to come out to her family.

The nuanced backstories  Mindy Kaling and Lang Fisher develop for each character allow all viewers to relate to one if not all of their experiences, whether those experiences were romantic troubles, honesty with parents or self-discovery.

The characters were enjoyable because they each balanced each other out. Fabiola was an introvert, Elanore was dramatic yet awkward at times and Devi was assertive and outgoing.

The reason why this show stood out was that the characters weren’t one-dimensional. Being Indian wasn’t all Devi was; the creators gave her personality outside of her race and culture and allowed her to be more than just a stereotype.

One problem with this show would be Devi’s love interest throughout the series, Paxton Hall-Yoshida (Darren Barnet). Paxton was nothing but a glorified pretty boy, and he could have attained the same level of sophistication as the other characters if the audience had gained insight into his family life or background. Hopefully, season two will reveal more depth in this character.

The series is comprised of 10 episodes, each about 30 minutes long. Even in the short time span, viewers can be assured that they’ll be laughing or connecting with the characters’ troubles.

The camera angles and lighting give the show a peppy feel, while the music played in the background is mainly pop and upbeat. It definitely gives off the vibe any coming of age show would have but didn’t make a difference in the quality or enjoyment of the show.

Whenever the show does do flashbacks, they’re still treated with the same positive tone, even if the story being told is sad. When we get a look back onto Devi’s relationship with her dad and their final moments together, it’s sweet, but still makes you sad knowing what’s to come.

The show manages to be lighthearted, while still having the ability to get you in your feels. You’ll laugh your head off in one scene and be crying your eyes out in the next. The show is just what you need to take your mind off of the craziness of the world right now.