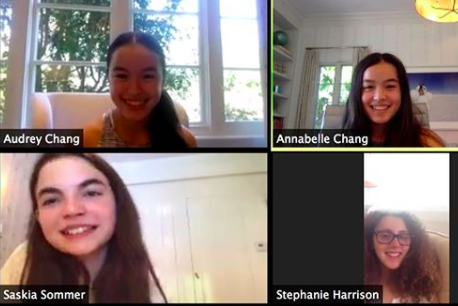 Sixth grader Saskia Sommer and her tennis teammates meet on Zoom during the first week of the Panther Challenge. After traditional spring sports were cancelled, athletes shifted to a virtual model to promote psychical fitness, mental health, and team connectivity.

By Grace Doyle and Rio Hundley

The start of a new sports season always brings a slew of new opportunities and challenges — but the 2020 spring season brought more than most. On March 16, practices and competitions were indefinitely suspended, and on April 12, spring sports were officially canceled in response to the extension of stay-at-home orders by California Governor Gavin Newsom.

“I wasn’t shocked, just because of the trajectory of COVID,” Athletics Director Kim Smith said. “I had anticipated that that would happen,”

A large concern for the Archer community and Smith regarding spring sports cancellations was seniors missing their last seasons.

“When I heard the news, my mind went immediately to … our seniors, and the impact that it would have on them emotionally,” Smith said. “I know a lot of them have been preparing for [their season] and stepped into leadership roles, and it was cut short right before they took flight.”

With the loss of senior recognition traditions like senior night, the Archer Athletics Instagram features a new senior athlete each day, highlighting their accomplishments and including quotes from coaches.

“Something I was looking forward to were the end-of-the-year traditions like senior night and the swim dinner for the final,” McCaskill said. “I just miss the team vibe of just being at meets together because it’s a good support system.”

To build in a similar support system and help athletes maintain their conditioning at home, Smith launched the Panther Challenge on April 20. The Panther Challenge is a five-week, point-based challenge among Archer’s athletic teams. Each sport is split into teams of five or six and completes different daily workouts, wellness challenges and weekly team bonding. Sophomore Marissa Gendy feels that it allows her to “form a different connection” with teammates.

“It’s a way for them to compete against each other,” Smith said. “It keeps them physically engaged, so they’re getting stronger, they’re getting faster, and that competitive sharpness as well.”

“The physical is great, but it’s also about that mental piece, helping our athletes have balance, and peace and serenity as they head into these workouts,” Smith said.

However, the physical piece of the Panther Challenge, which concludes on Friday, May 22, has not been an entirely positive experience for all athletes.

“I don’t mind doing it because I’m staying in shape, but I feel like there could be different ways for us to work out,” Gendy said. “The way they split it up is sometimes not always the way I want to run [or work out]. It’s a little hard when the workout is made for everyone rather than individually. But I see them trying now, and trying to make modifications, so that’s really great.”

“I’m participating because I feel obligated to because I’m the captain,” McCaskill said. “I do think it’s a good substitute for fitness replacement, but I still miss that team bonding. ”

“When we connect on Zoom, we’re all muted, so it doesn’t exactly feel the same as being in person,” Sommer said. “But I’m really glad we still have ways to connect. I think it’s a lot of fun. We just had our Netflix Party. I’m glad there’s still something we can do together.”

Gendy did not feel as though the Panther Challenge’s Netflix Party helped her bond with her teammates.

“It’s kind of hard because everyone has very different schedules, and we have a senior on the team, and I don’t want to be bothering her,” Gendy said. “I’m sure [she] has better things to do with her life than watch a Netflix show with some random people. I don’t know — I feel like there are ways we’re connecting, and there are ways we’re not really connecting.”

Sommer, Gendy and McCaskill all agreed that they were grateful for the opportunities to connect but said that it wasn’t the same as in person.

“There have been little moments where it seems like our team is here, like when we first started the panther change and I said to my team, ‘Let’s do this, guys’,” McCaskill said. “Sometimes in the group chats we have little moments where it seems like we’re connecting. But I think there are things that we bonded over that just don’t happen when there is a screen separating you.”