Column: My complex relationship with Archer 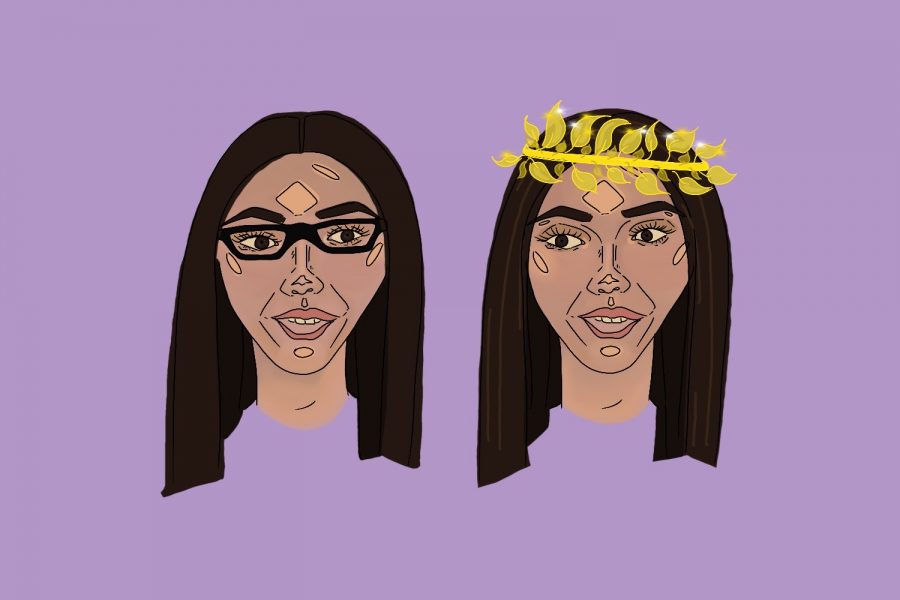 An artistic illustration by senior Leslie Castaneda shows Celeste speaking to her younger self. The image portrays the reflective nature of her column, where she writes about what she has learned about identity during high school. After three years, this is her final addition to the Oracle.

Before I sat down to write this final column, the last addition to my three years on the Oracle, I went all the way back to read my first ever piece,  “Latina Girl in an Archer World.” In the column, I reflected on my first year at Archer, specifically my transition to Archer and the culture shock I experienced coming to a predominantly white institution (PWI).  I talked about being confronted with questions about identity and belonging in a way I had never had to deal with before.

As I grew up over the past few years, this column became a continuation of that first reflection. It was the place where I wrote about what was on mind and the topics I found myself talking about with friends and family or in class. It has become my big (public) journal. As time went on, I became more and more comfortable with being more vulnerable, personal and assertive. I began to not shy away from asking myself and my readers hard questions.

Although I still agree with my first column and think that my freshman year was one of the most transformative experiences of my life, there was definitely more to that story. My younger self wanted a solution by the end of the piece. I don’t know if it was because it was my first column and I wasn’t sure how much to share, if I wanted a happy ending for the sake of the viewers (or even myself) or something else, but I don’t think I had fully wrapped my head around just how overwhelmingly complex and ever-changing identity is. That is arguably the most important lesson I have learned at Archer.

Back then, it was easier to think that the hardest part was over, but as this column and these past few years have shown me, there are countless questions we have not even asked ourselves, and for most, we don’t even have the answer. The more you learn, the more questions you have. I feel like in most of my columns, I don’t even have a concrete stance by the conclusion because I realize there are too many factors to consider.

The most significant example that I can think of is my complex, ambiguous relationship with Archer. As I discussed in my first column ever, navigating “in-between” two vastly different worlds — home and school — created many tensions within my identity. I have continued to deal with that strain throughout the entirety of high school.

For example, Archer was the first place that really empowered me as a woman and taught me about topics like feminism, intersectionality and social justice. That influence motivated me to put myself out there and do things like write this column, lead clubs, join the student Diversity Conference Leadership Team (DCLT), etc. It also exposed me to progressive political beliefs and sparked ideas for what I want to do in the future.

However, these ideas conflicted with my family and community’s traditionally conservative values. It revealed the prominent machismo in my community, the prejudice I grew up when it came to topics of gender, sexuality, etc. and the fact that politics weren’t exactly the most popular dinner table discussion. As I began forming my own political beliefs and talking about them in conversations, I began to be labeled as the stereotypical, “angry” liberal by my community back home. This sometimes led to negative feelings of exclusion and being misunderstood.

Similarly, Archer also introduced me to the importance of social-emotional learning and mental health. It has played a huge role in my experience with confronting my own mental health issues during high school. However, although it has bettered a bit, this topic remains a taboo in my family and community.

However, navigating in between these two worlds hasn’t only revealed negative aspects of my home and community. I have also felt the strain of Archer’s high stress, competitive environment as well as it being a PWI. The harsh truth is that at Archer, for the first time in my life, I became aware of my racial/ethnic identity and its implications. I was exposed to concepts like white privilege and race/class inequalities, so I felt the strains of my lower socioeconomic class and being a first-generation student.

I was also confronted with many different types of pressures: pressures to assimilate, pressures to represent a minority group of people and pressures to “prove myself.” I have definitely learned how to better cope with these pressures in the last few years, but it will remain a struggle.

There is also the newfound tension between my community and the life I’m trying to create for myself in the future. Especially as I go to college — to another PWI — I’m questioning how I define success and how I feel about constantly going to predominately white environments to get this supposed “success.” This is something that I thought about even while attending Archer. I’ve always been uncomfortable with the fact that I went out of my community to attend Archer and get a “better education.” What does that imply? Am I turning my back on my community back home?

I feel like I could write an individual column about all of the topics I brought up above, and I want to continue to explore them, but we, unfortunately, don’t have any more time left before I graduate.

Now, these are all questions I still have and will most likely continue to have. I have not been able to reconcile these tensions, but these past four years at Archer have taught me that that is okay. I understand that my multifaceted identity will continue to change.

In the end, my experiences at Archer have shown me that I’m not inferior in either environment, I’m just different. I’ve learned to be open-minded, to consider all aspects of any situation and to openly express my opinions because they truly matter. I know how to be respectful and kind but assertive and willful as well. It has all made me proud of my intricate, beautiful identity.

So, as I sign off from the Oracle, I can’t say I have it all figured out, but I can say I feel ready and excited to continue growing. I’ll take everything all of you have taught me over the last few years, the good and the bad, and for that I am grateful. From the bottom of my heart, thank you — and this isn’t a goodbye, it’s a see you later.