Review: ‘The Great British Bake-Off’ is one thing the world can count on this year 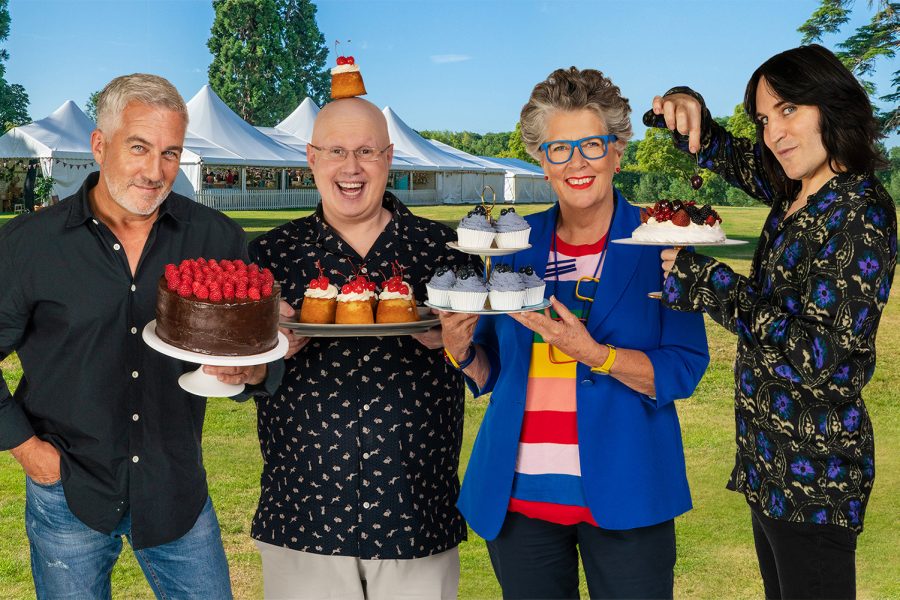 Series 11 of "The Great British Bake-Off" premiered on Sept. 22 after filming in a production-wide social distancing bubble. The show creates a fun, sweet respite amidst a stressful year.

A transparent tent sits in a bright green, provincial field. Cheerful music plays as the camera zooms into teal the workbenches, refrigerators and KitchenAid mixers. This idyllic scene is so commonplace in the hit competition show “The Great British Bake-Off” that it’s easy to forget about the strange year of 2020 we leave behind us.

This year, the show (which is called “The Great British Baking Show” in the U.S. for copyright reasons) created its own social-distancing bubble of 120 people. They included 12 bakers from across the U.K., judges Prue Leith and Paul Hollywood as well as host Noel Fielding. Joining them this season is newcomer Matt Lucas, who hosts alongside Fielding. You might recognize him from “Bridesmaids” or Tim Burton’s “Alice in Wonderland.”

The show gained popularity for its innocent atmosphere, baking melodramas (I’m still not over Ian binning his baked alaska in series 5), and overall sense of britishness. “Bake Off” maintains these essential elements in its eleventh series, even if it doesn’t necessarily stand out from previous seasons. The tension in the show’s technical challenge and shock of the final showstopper bake each week gave me an escape from the more demoralizing dramas of the 2020 election and COVID-19 resurgence.

Despite “Bake-Off”‘s cheerful atmosphere and tried-and-true episode structure, it has been criticized in recent years, particularly since it sold to Channel 4 in 2016. NewStatesman’s Emily Bootle described the newer seasons as a “stale, smug parade of self-referential cliches.”

Fans accused the show of selling out, and were especially angry that the new deal with Channel 4 caused three of the four original cast members to leave the show (Mary Berry, Mel Giedroyc and Sue Perkins). Many were disappointed by new challenges, which became increasingly kitschy and trendy.

Although I may have rolled my eyes at the technical challenge on rainbow bagels and the commodification of the “Hollywood handshake,” I don’t necessarily believe the new seasons are much different than the fabled episodes of series 1-3. It is us, not the “Bake-Off,” which has changed.

We are not the world we were 4 years ago. We’ve become more cynical, less innocent and certainly much more disillusioned to the societies around us, and “Bake Off” is no exception. Concerns were raised in the hiring of Lucas this year, due to his use of blackface and yellowface in his earlier comedy work (he has since apologized).

This development is certainly disturbing, especially for an Asian viewer like me. But aside from Lucas, there is value in having something pure, simple and (pun intended) sweet to waste a few hours on. How much does it really matter if the challenges are arbitrary or Paul gives a few extra handshakes?

Try to watch this season’s “Bake Off” without comparing it to earlier series. Get lost in domestic struggles and quippy dialogue, and let yourself take a break from the divisiveness and uncertainty of this year.