From East to West: Through the eyes of Penny Franklin 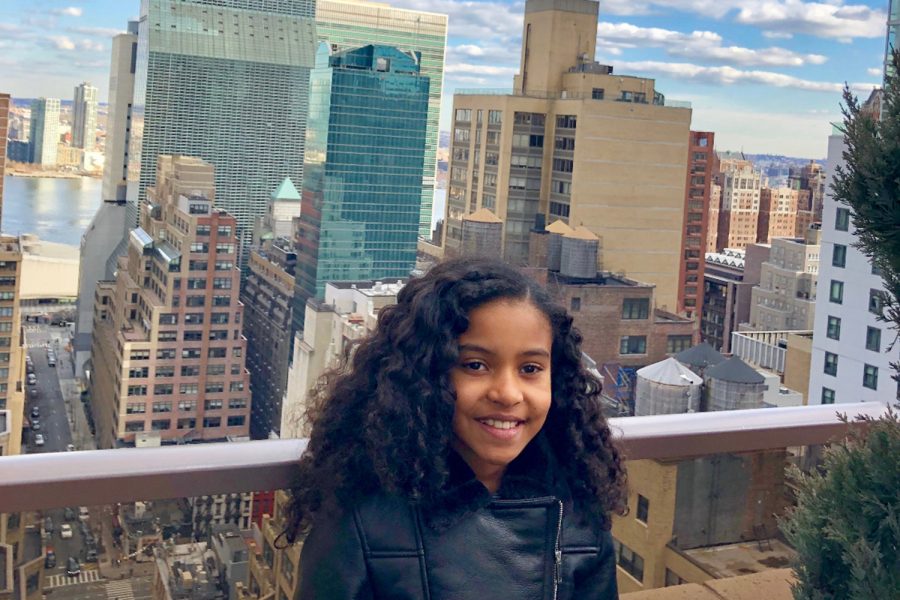 Sixth-grader Penny Franklin poses for a photo overlooking the Manhattan skyline in New York City. Franklin said she would describe herself as a "city person" at heart.

Sixth grader Penny Franklin moved from New York City to Los Angeles towards the end of July. As it is Franklin’s first year at a new school and in a new city, she has aimed to explore Los Angeles but still keep the memories of the fun activities she did back in New York City with her friends, especially during the holidays.

“It’s been pretty crazy, especially because of Covid,” Franklin said. “I’m actually really liking it here in LA. And, yes, because of Corona it is really annoying, but there’s also some upsides to it, such as being able to have more chill time.”

Franklin said that the hardest thing about being in Los Angeles right now and adapting to a new school is missing her friends.

“I’m so far away from my really good friends because they’re on the East Coast. I mean, I still get to FaceTime them but it’s definitely harder,” Franklin said.

Franklin also said she finds school to be a little challenging especially at the beginning of the COVID-19 pandemic. Towards the end of her fifth grade year when the lockdown started, she said online school was getting a “little harder” and “annoying;” however, she has adapted to the Archer’s schooling system, which she said the school has made really “simple and easy to navigate.”

“I definitely think the work is challenging, but I love a good challenge,” Franklin said. “It’s not so hard but, at the same time, the teachers really are nice and supportive. Overall, it is really good, and I am adapting.”

As the holidays arrive, Franklin shared her favorite holiday memories and activities she did in New York with her best friend.

“My best friend also lived in New York City with me, and we would always go to breakfast,” Franklin said. “We would go shopping around the square, see the giant tree, take pictures and go shopping at the Lego Store, which was really fun.”

Some New York activities Franklin wants to bring to Los Angeles once the quarantine is concluded are to see many lights, go to popular stores and go window shopping.

“I’m not sure if LA does this because I’ve never been here for Christmas but there’s always so many lights and all the popular stores decorate their window so you can go window shopping,” Franklin said. “There is all of these amazing buildings and moving lights — it’s really cool and fun.”

Franklin described herself as a “person who loves the city” who enjoys walking around and taking the subway.

“In New York City, walking and the subway are your basic forms of transportation,” Franklin said. “Everybody is walking, everybody’s rushing and it always feels like something is going on There’s always lights around and especially during the holidays there are cute decorations. The stores were huge and I just feel like the vibe is really nice. I love it there.”