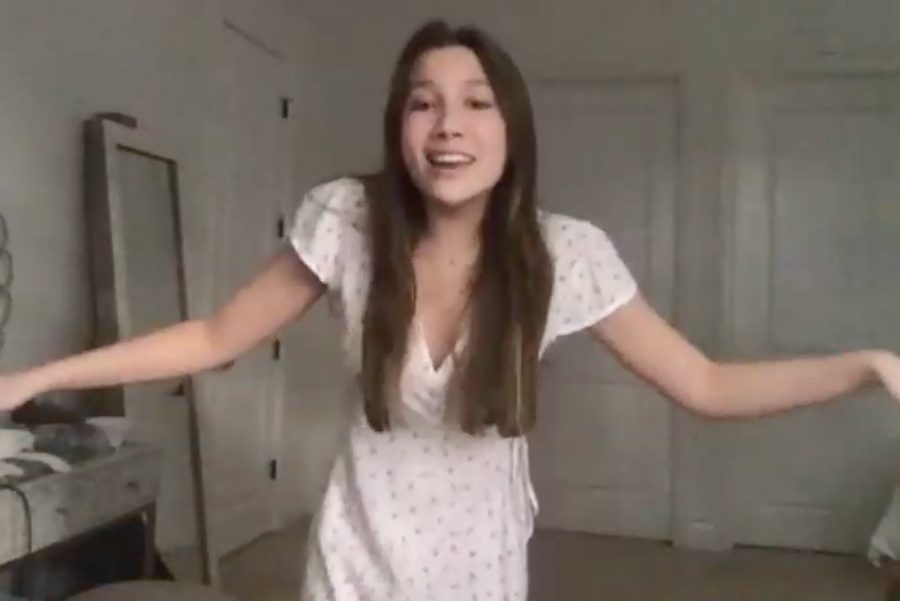 Sophomore, Isabelle Verdery, performs a song over Zoom during an audition for the upper school musical, 'The Drowsy Chaperone'. The live singing auditions were designed to "simulate what we would have done in person," director Reed Farley said. The live auditions were accompanied by self recorded monologues and group readings.

Archer theatre is taking the pandemic in stride as they begin preparations for this semester’s upper school musical. After adjusting to the atypical format of online learning, Director of Arts and Director of the musical, Reed Farley, was “thrilled” to announce ‘The Drowsy Chaperone’ as this year’s musical.

“We started the theatre planning process last spring and decided that we would learn a lot through doing a play as those are a little less complex without singing and dancing,” Farley said. “So we learned what we did from the [middle school] play and now we’re taking that and applying it to the musical this spring.”

Paralleling the format of the middle school play, the upper school musical will be filmed on Zoom and edited to be streamed on Vimeo, another similar element is the entirely virtual auditions. This “hybrid approach” to auditions as Farley described, consisted of live singing auditions, videotaped monologues and group readings after school Jan. 5 to 10.

“There are pros and cons to online auditions because on one hand people are exhausted and it’s really hard to get a certain energy from somebody over the screen but at the same time people are more comfortable and willing to take risks in the home setting which is less intimidating,” Assistant and senior Madis Kennedy said.

The 90 minute musical follows an elderly man at home in his cold New York City apartment, listening to a record player of his favorite musical. Then the record player starts, and the musical comes to life in his room. Both Farley and Kennedy noted the intentional challenge of holding live singing auditions for the Upper School performers.

“We wanted to give them that experience of auditioning in front of a panel, having to work through those nerves and showcase their ability to manage the anxiety and the jitters that come with theater,” Farley said. “The thing about singing is whether or not you choose to belt the high note or put your all into it because it’s an in the moment thing and we wanted to create that environment online.”

Junior Bess Frierson, a veteran Archer theatre participant who was casted as Aldolpho, reflected on her experiences auditioning over Zoom where using body language and making eye contact with the cast and the audience was no longer feasible.

“When auditioning in the past, I have taken inspiration from other singers and actors around me because that’s a huge part of learning. But now I can’t really see others so I don’t have anywhere to take inspiration from except myself,” Frierson said. “And there are just less places to hide. Everyone sees everything you do because it’s so close and intimate, which is in some ways is super exciting and in others, super scary.”

A feature of the musical contingent on the online setting was the choice of script. With a limited ability to hold in person productions, licensing companies added flexibility to schools’ use of scripts, granting Archer theatre access to a greater variety of musicals to perform online. Following the dismal tone of the year, Farley and Kennedy agreed that the comedic script, “The Drowsy Chaperone,” provided a “much needed” change.

“We’re all exhausted by the insanity of the world and by COVID that it’s almost impossible to do something that’s sad or serious in any way. So I think it’s really good that we’re doing a musical that’s a complete comedy in a funny, entertaining way,” Kennedy said. “It allows people to escape school and the seriousness of the world for three to four hours every day and do something silly like sing about a wedding.”

The musical yielded a total of 27 auditions; a turnout much greater than in past years for a script less mainstream in the theatre community. After challenges double-casting the middle school play, Farley decided on a single cast that “provided as many opportunities for the extensive talent as possible.” The final cast list was posted on January 12 and rehearsals began the following day. Zoom rehearsals are scheduled through January, February and into March building enthusiasm among the upper school participants.

“I am beyond excited for the community in theater. I know that’s kind of cliché but I think that’s what, at the end of the day, everyone goes there for,” Frierson said. “The whole process of the show is going to be silly, chaotic, funny and really light hearted. There will be the cliché musical theater of bright lights, high energy dancing, crazy jokes, and other things that I hope will make people as happy as it’s gonna make.”

Filming for the musical will take place in March during tech week to allow time for editing, and the final production will be live streamed on Vimeo in May. Capturing the musical over Zoom will require an innovative approach to props, sets and costumes.

“The concept of ‘The Drowsy Chaperone’ allows us to play with our home environments because that’s essential to the piece,” Farley said. “Do I really know what that’s gonna look like yet? Not exactly, but I’m hoping kids will be coming out of refrigerators and funny things like that. It’s about looking at what students have available in their environments and then making the most of it.”

Moving into 2021 in the online setting, theatre remains an unwavering part of life at Archer.

“It’s really amazing that we’re able to still put on shows and the theatre community is able to provide amazing opportunities because it is something I think a lot of students really need right now,” Kennedy said. “If anything, this is showing us how important, magical and special theater really is.”