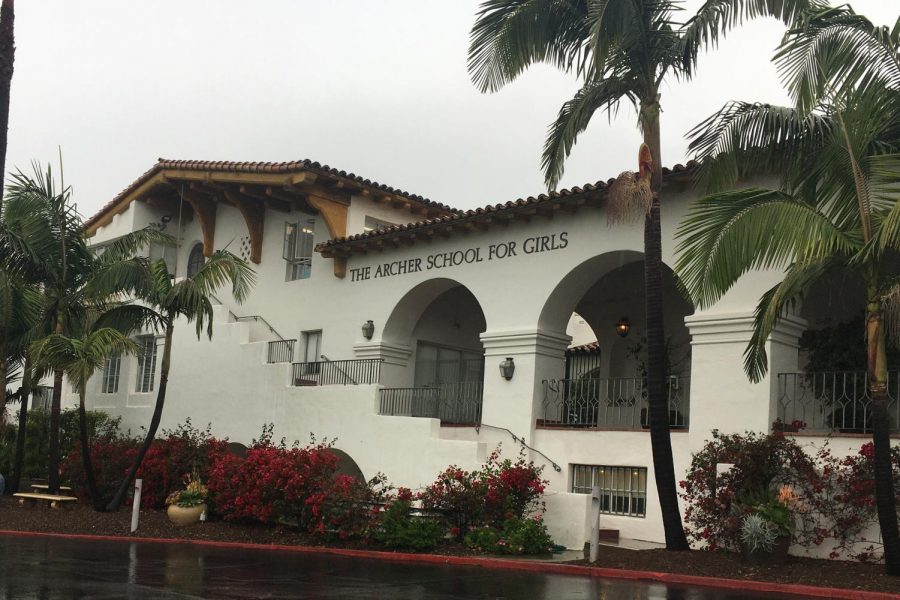 The front of Archer on March 13, 2020, the last day of on-campus school activity. On March 8, 2021, in-person learning will officially begin again as the sixth graders arrive to attend class on the Archer campus for the first time.

In March of 2020, the doors of Archer’s classrooms closed as a result of the pandemic. Almost a year later, they are ready to open again as the sixth grade class prepares for in-person learning.

This step towards in-person and hybrid learning is a result of the decreasing COVID-19 cases that led Los Angeles county to sanction in-person learning for pre-kindergarten through sixth grade students. Science teacher Casey Huff described this past Thursday, where faculty, staff and the sixth grade assembled on the Archer campus, as one of the most “action-packed days.”

“I have been looking forward to this day for so long,” Huff said. “I was so happy to see the students and feeling a little bit of what Archer was like before the pandemic was really nice. Orientation [was] lively and joyful but it’s also a big change which is challenging in some ways, but I would say overall, it was a great day.”

Students arrived on campus via bus and parent drop-off from 8:00 a.m. to 8:30 a.m. Upon arrival, each student’s temperature was taken before being separated into one of the four cohorts. The objective of the cohorts is to establish a stable group of peers that accounts for the classes being taken by each student while honoring connections made over Zoom, Huff said. Hence, safe social interactions between the new peers ensued throughout the day. Sixth grader Charlotte Burnap described coming to campus for the first time as a “nervous” but exciting experience.

“It was just so amazing to see my friends together and connect with my teachers who I usually would just interact with during Zoom meetings,” Burnap said. “It was definitely difficult being six feet away and in masks, as it was hard to see emotion sometimes or speech would be muffled. But overall, the positives outweigh the negatives because it was such an amazing experience connecting, laughing and joking around with everyone.”

Without the ability to gather as a grade, each cohort virtually attended a welcome assembly featuring greetings from Head of School Elizabeth English, Interim Middle School Director Nat Damon, Dean of Students Jenn Babin and Middle School President Rachel Chung. The sixth grade class representatives also took the opportunity to welcome their peers with a pre-made video projected on the walls of each cohort classroom.

“[The other class representatives and I] really want to make sure that everyone felt loved and excited to be able to come back on campus,” sixth grade class representative Siena Fantini said. “We also wanted there to be a really fun vibe with the video and make sure that everyone had a good time and felt loved.  The goal was to say, ‘Hey guys, we’re so happy to be here. We’re happy that you guys are here just talking about being happy and being on campus.’”

Cohort community building took place next, allotting time to review safety guidelines and set groups norms and expectations. Considering that up until this day, all grade connection had been through a screen, each group spent time getting to know one another and celebrating being in-person at Archer. Later in the day, further integration into campus took place as students had the chance to decorate their locker and cohort space, tour campus, participate in a movement activity and reflect through personal writing.

“It was actually kind of surprising how well we still knew each other even though we are usually online because at first I assumed people would know me as the Charlotte who’s in her bedroom during class, but instead we talked about our interests and personal things that you can only pick up from a conversation, not over Zoom,” Burnap said. “And I think the activities were also a great way to connect, like the locker decoration was just really fun to be able to customize your own locker and do something creative with friends.”

In the afternoon, English teacher and sixth grade class dean Lauren Sekula led a virtual class meeting that reviewed the academic schedule and preparations for Monday, March 8, when in-person learning would officially commence for the sixth grade. Subsequently, students spent 15 minutes attending each of their classes on Zoom from their cohort zones. Those whose cohort leader was their teacher for a certain class could attend that specific class live from the room they were in.

“Because it was orientation, it wasn’t the exact feel of what school and learning can be actually like but I still had the chance to get to know the teachers really well and build relationships on campus,” Fantini said. “And I’m just really excited to get the chance to vibe with my friends which makes it easier to learn. So I think being on campus has been glorious experience, and I’m just so excited about everything to come.”

At 3 p.m., students logged off their final class meeting and departed from Archer, marking the end of the sixth grade in-person orientation. Beginning Monday, the students will have their first ever official school day on the Archer campus.

“We all have the mindset of flexibility and just making sure that the students are feeling safe and supported,” Huff said. “Even though it’s not like pre-pandemic school in the way that many of us wish it could be, I think just being able to be together be on Archer’s campus felt relatively normal which is crazy that I’m saying that, but it was a nice return to some normalcy.”