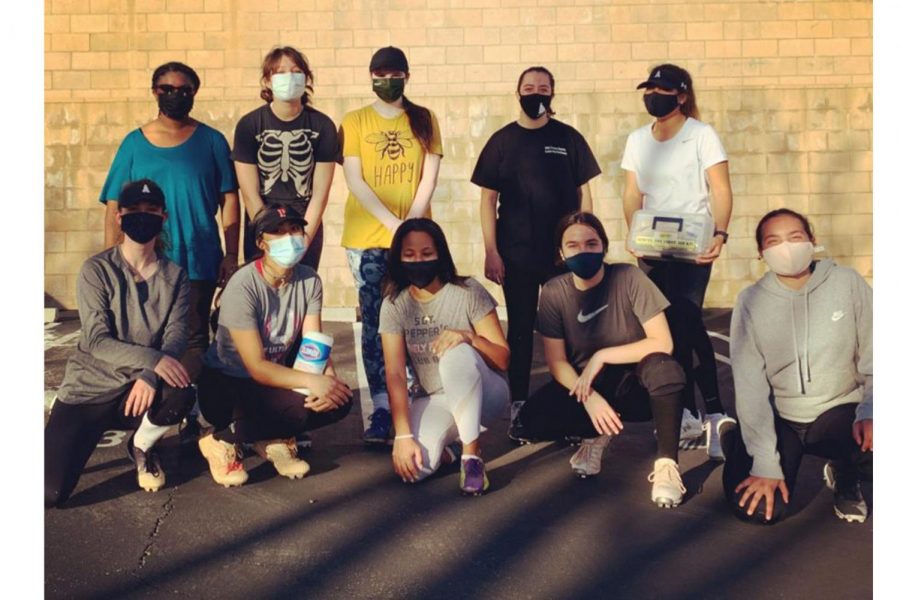 The 2021 Archer softball team gathers during the month of March after not playing for a year with each other. This softball season, junior Cristina Fuentes-Alva said communication and motivation are key within in a team. "Yes, and I feel because it's a sport where we're so spread out on the field, we're always communicating and then we just made a group chat recently so we can all talk about stuff, and we're all coming to practices and we're all very motivated." Fuentes-Alva said.

During the month of March, Archer’s softball team returned to campus to resume practice and to join together after not seeing each other for a year. Players across grades reflected on their motivation for softball and how it has changed as a result of  COVID-19 .

Junior Cristina Fuentes-Alva said she enjoyed the break from softball but not as much as she enjoyed getting back to playing and seeing her teammates. Seeing her new teammates this season was a great benefit of coming back to practice.

“I think I’m more motivated because this break really made me miss the sport,” Fuentes-Alva said. “I feel like I have more motivation to play, and I’m very eager for the season, just practices and I get so happy on days that I have practices.”

Fuentes-Alva said her teammates are more motivated than they were last season because they have been gone for so long. She feels really excited that they are motivated about softball and ready to do great this season. She is even more eager to get back on the field to play herself.

“I was away and I didn’t finish off last season, so that made me miss it even more,” Fuentes-Alva said. “I could not play a couple of games, or practice but I miss it and try to come to everything I can.”

Senior Ava Thompson said motivation and communication. Those factors, she said, are what builds a team throughout a season. Without them, the team may lose track and not “function.”

“Most sports are about talking to your teammates and figuring out a plan and what you’re going to do, and then, afterwards, having that camaraderie of being friends and being able to communicate in an effective way,” Thompson said.” Thompson said.

Junior Justine Moore also feels more motivated to come back to Archer because of COVID-19. She said softball is a fun sport to play, and she loves having something to do after school

“Getting back to play was really fun, but I think having something after school to look forward to is also really great. Because school is great, but I also like getting to do something else at Archer besides just learning. It has been really exciting for me,” Moore said.

One thing keeping Moore motivated to come to practice or even games weekly is the team. She said the team has a great sense of community and is really supportive of one another during practice.

“I’ve only been on the team  for a week now, but everyone’s so motivating and the coach as well,” Moore said.

Getting out of her house and playing a sport she likes is what gives Thompson motivation during COVID-19. She said she loves how her team is excited to be back for the last few months of school.

“Being with that group of people was really my motivator; also, I needed an outlet to work out and get some sort of fitness and so softball was like a big part of that,” Thompson said.  “I think we’re all kind of just running with that idea of we actually get to have something that a lot of the other sports Archer didn’t. So I hope that it’s a motivator for my team. I know it’s a motivator for me because I want to make this last year, even though it’s not as conventional as I would have hoped. I want to go out with a bang.”