The lopsided-gender imbalance in chess: What players are doing to make chess more inclusive 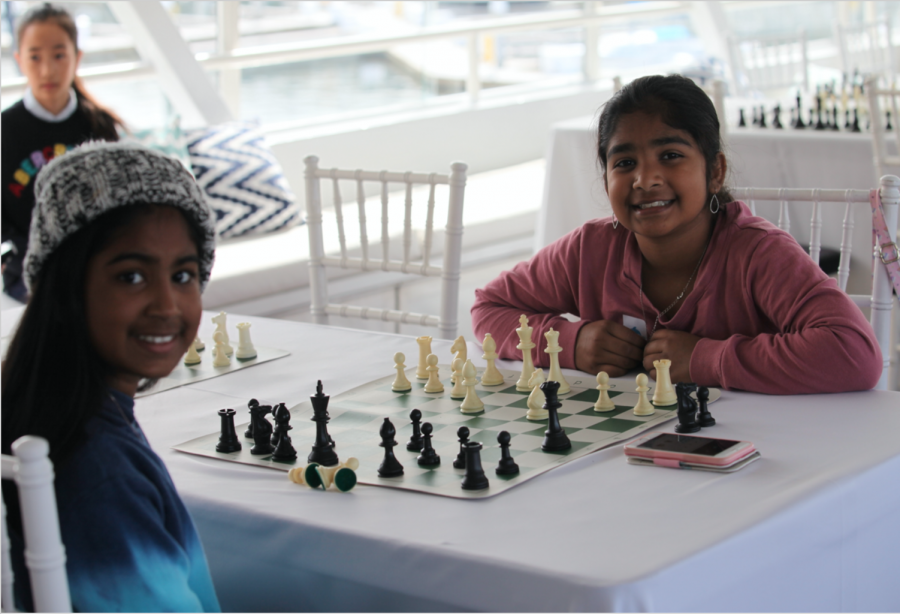 Girls playing each other prior to the COVID-19 pandemic as part of the "Promoting to Queens" program. This is representative of the efforts being made to make girls and women feel more included in the male-dominated chess community.

Like many other fields in 2021 that are male-dominated, chess players are working hard to encourage women and girls to become more involved in chess. The United States Chess Federation is currently taking steps towards breaking down barriers that are preventing women from participating and continuing chess.

Since the beginning, chess has been a male-dominated sport. Similar to other male-dominated fields in STEM, politics and most sports, there are debates as to the cause of their disproportionately low female participation rates.

Of the current active United States Chess Federation (USCF) memberships, only 15% of registered chess players are female. This is already a rise from what was historically only 10% female. In terms of top-players, only 1% of the Top-100 players in the world are women. This gender imbalance inspired the 2015 founding of the U.S. Chess Women’s Committee, with the intent of empowering females.

The Women’s Committee was founded to support girls and women. The committee shows their support by offering programs — such as all-girls tournaments and all-girls classes — and opportunities to be part of communities such as book clubs and podcasts. These exist to keep girls interested in chess, as well as to provide an encouraging space for girls to be themselves.

“I’m very happy to [organize all-girls events] because that provides them a sense of opportunity to be just us [girls and women],” Dr. Judit Sztaray, recipient of the 2017 USCF Organizer of the Year Award, said. “Being able to get a name for yourself in a male oriented world — it’s hard.”

Sztaray is an organizer for the Mechanics’ Institute Chess Club, in San Francisco, the oldest chess club in the United States. The Mechanics’ Institute Chess Club has continued its free women’s program for “absolute beginners.” This category  is for novice players or developing enthusiasts, and it is one of the many ways that women are being encouraged towards playing chess.

“We start from scratch and then we grow them up to be able to play through a game,” Sztaray said. “It’s a very unique experience teaching adults because you forget that you actually have to explain the game to them. Yes, we play to checkmate; this is how the pieces move, and we run this course for 10-weeks. And, by the end of it, they are functioning chess players.”

Following the release of the Netflix series, “The Queen’s Gambit,” there have been efforts lead by the United States Chess Federation to draw in viewers of the show towards playing chess. Classes aimed at absolute beginners play a crucial role in encouraging newcomers.

Recently, there has been a push to involve adult women in chess, as novice courses were typically for adolescents. Programs like the Madwoman’s Book Club, network women at all levels and foster community building.

“We have champions in the club, like 2100 [reference to the chess rating system; 98th percentile] plus, and complete newcomers,” chess Women’s Grandmaster (WGM)  Jennifer Shahade said. “And the way we connect is as simple as a book. Sometimes the books are more tenuously related to chess or we read something quite direct like ‘The Queen’s Gambit.’ What we’re doing here, is finding common ground between the women, despite their various levels.”

Shahade is the Women’s Program Director for the United States Chess Federation. She is a two-time United States Women’s Champion and key promoter of tournaments and programs that support women and girls in chess.

The Madwoman’s Book Club is not the only initiative to encourage women towards playing chess. The Women’s Committee has been targeting another group who, much like chess players, would be interested in learning: chess moms. While their kids play games between one and four hours, parents have the opportunity to occupy themselves at tournaments by learning how to play. Special tournaments offer mother-daughter team rewards where the top-scoring mother-daughter team receives a prize.

Despite progress being made, there are still gender barriers that make being a woman in chess a difficult task. Current girl’s and women’s programs aim to breach these barriers by providing and promoting an encouraging environment, representation and respect.

Certain barriers however, extend past a societal level. Sztaray grew up and began playing chess in Hungary, where discrimination against women was just one of many significant problems.

“The gender barrier is always there, but at that time it was different,” Sztaray said while reflecting on what it was like playing chess in Hungary. “We weren’t thinking about gender gaps or about girls having less of an opportunity. For an average player, it didn’t matter because we had so many other problems in terms of just surviving,” Like Sztaray, the Polgár sisters, Judit Polgár, Susan Polgár and Sofia Polgár, also started off in Hungary. They were a famous Hungarian family  of chess-playing sisters.

“I can sympathize with them [Polgár Sisters] because I know exactly what they went through,” Sztaray said.

Judit Polgár is the only female player that has ever breached the global top 10. She has beaten the current World Chess Champion, Magnus Carlsen as well as multiple previous champions.

Despite the chess talent and ability some women possess, 1972 World Chess Champion Bobby Fischer himself demonstrated his disregard for women in the form of sexist remarks.

“They’re terrible chess players … I guess they’re just not so smart … I don’t think they should mess into intellectual affairs, they should keep strictly to the home,” Fischer said in an interview  with a 1963 Canadian broadcasting company.

While Fischer represents a more extreme form of sexism, there is still disrespect towards some female players.

“Sometimes the boys, they don’t treat the girls with respect,” Kimberly Doo-Mcvay, part of the Women’s Committee, said. “Some girls can deal with it.”

Fischer believed that he could beat any female chess-player with knight odds. “Odds” in chess are when one player plays the game without a certain piece. Computer analytics, despite Fischer’s sexist remarks, deem playing without a knight as grim or unsound. As World Chess Champion, Fischer represented a sexist model of playership, opposed to modeling a good standard like some previous champions.

“Others might think, ‘‘Why do I have to deal with this kind of situation?’ I can be involved in another activity, which I find enjoyable, and I don’t have to be treated like this,” Doo-Mcvay said.

“I think to society, it’s a little bit less acceptable for women to be bragging about themselves,” Shahade said. “And yet sometimes it’s good to be very confident and brag about yourself, because you can set yourself up for success.”

Within chess, women face multiple double standards relating to confidence and representing themselves.

“I think the culture of women underestimating their successes is damaging, and I probably did fall victim to that,” Shahade said. “Lack of confidence has definitely plagued me throughout my career, and finding that right balance between searching out to be the best version and player but also being confident when I’m playing, and I’m sure there’s some gender dynamic t0 that.”

Confidence in chess is something that is often spoken about when referring to how a player manages in handling scenarios within the game. Lack of confidence looks like a player accepting a draw offer when a player is unsure of their ability to win, or being afraid of messing up.

“I think that one of the most dangerous negatives that women can experience in chess is [sexual] harassment, or [unwanted] attention from men, especially when they’re young,” Shahade said. “Another issue about lack of respect and the portrayal of women in chess is the double standard relating to appearance.”

Within society as a whole, people tend to pay more attention to the way a woman looks. In keeping with making progress towards making chess tournaments a better environment for girls and women, it is important to value women for their ability and not just their appearance.

“Girls in chess are sometimes photographed with more emphasis on their looks,”  Shahade said. “I think coaches and journalists can try to make sure that they’re focusing on games of women as well as just pictures of women or they are taking pictures of women not to only do pictures where women are smiling, but also try to capture some of the intensity of the game.”

Sztaray says she hopes the attitude can lean more towards women being treated equally.

According to Shahade, making sure there is respect for women in chess can look like men condemning each other’s actions when they make disrespectful remarks.

“If you’re a male player and you’re in an all-male environment, it’s good to shut it down when there are negative or sexist comments about women,” Shahade said. “That’s a great thing that men can do. And you see the effect of this on Twitch. There’s been a lot more positivity on Twitch, and I think much of it comes from that culture that’s changing where somebody goes into a stream and says, ‘Oh that woman’s hot.’ A lot of times there will be a moderator, who will just like delete that comment, right, and that’s become much more standard.”

“It’s not something you can fix overnight,” Shahade said. “Women are judged more on how they look.”

Throughout the pandemic, female players like Alexandra Botez and Qiyu Zhou have streamed chess and other games on Twitch and have grown a following. Twitch has shown players there are multiple things they can do within chess.

“I think that all kind of shows how chess can be more [than playing on the board],” Shahade said.

To promote this camaraderie, national tournaments have included a designated “Girl’s Club Room.”

The Girl’s Club Room has been a space where girls could go in between rounds and analyze their games, learn with each other and occasionally participate in planned activities.

“I think that’s where the girls club room has given girls a haven to to meet and connect with other chess players who happen to be female,” Carol Meyer, Executive Director of U.S. Chess, said. “And I think that’s been one of the real successes that the women’s program and girl’s program has had.”

Efforts towards including women in chess continue to innovate and find new ways to draw in their audience.

“The specific goal for me is to not lose the girls,” Sztaray said. “We can add more girl’s prizes in an Open tournament or reduce the entry [cost] for the girls, or make more girl scholarships.”

“Lose” refers to the more-common drop out rates for female players. At the youngest ages (5-8,) the ratio between boys and girls is a lot less one-sided. As girls get older however, they are more prone to giving up chess.

“It’s just keeping them involved, and letting them know that there are other women out there playing,” Doo-Mcvay said. “And I think that if we keep more women involved, that will just have this effect where more of the women will stay involved or support each other and then we’ll be able to increase the numbers.”

Shahade said that what helped her to stay involved was that people were “excited” to have a girl doing well, and she wants the same for other girls.

As for the future of girls in chess, “you’re goin to see a lot of really innovative things,” according to Shahade.

These leading women’s chess professionals said that good attention and progress are being made, but there is still work to be done.

“Girls are in it to win,” Meyer said. “Girls want to compete, they want to do great, they want to grow their rating, but they also want to belong and they want a sense of community.”