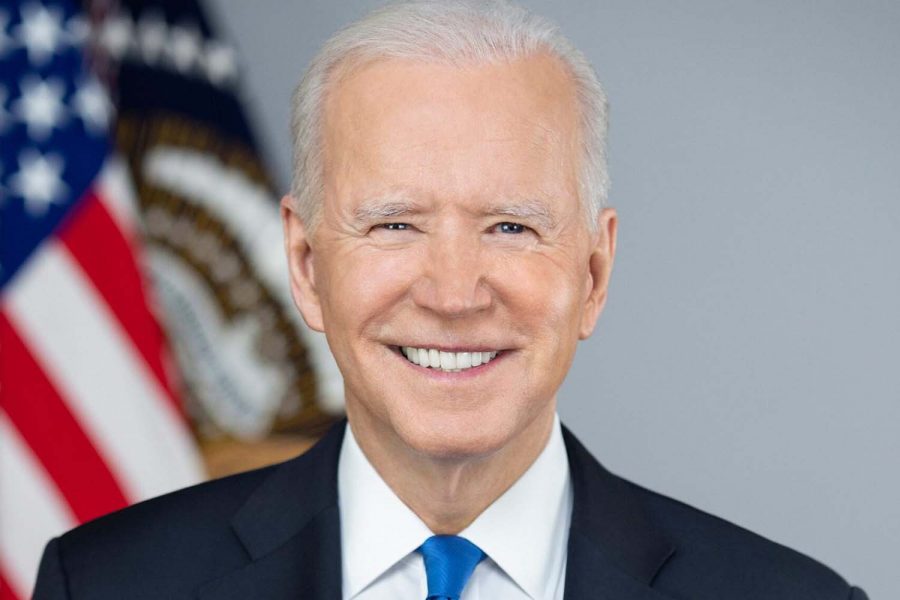 Joe Biden smiles for his official White House Portrait. The Biden administration has been in office for more than 100 days.

On a dark hot night 163 years ago, delegates sat down for dinner at the Republican State Convention in Springfield, Illinois, when their nominee Abraham Lincoln took the stage and famously proclaimed, “A house divided against itself cannot stand.” He was referring to the two parties’ disagreement on slavery: Republicans opposed and Democrats continued to support. Yet despite this polarization, Lincoln imagined a time when America would overcome their differences: “It will cease to be divided, it will become all one thing or all the other,” he said.  His speech was a catalyst for change, a revolutionary move by a brave man.

A century later, we have another president with a plan to make America better by bringing us together on our most divisive issues. Looking back on the first 100 days of Biden’s presidency, it does seem America is “building better by unifying better,” with Biden working to rebuild the systems that Trump destroyed.

My hope, though, is that Biden acts boldly and courageously and finds real solutions to our real problems rather than wasting time trying to appease the “Trumpies.”  It’s fine to appoint the country’s first Made in America Director, but I suggest the Biden administration needs to look toward bold, aggressive solutions rather than on repairing systems that are broken or outdated. Finding consensus and pursuing bipartisanship is great, but the time for real change is now, and we don’t have time to waste.

As has been made abundantly clear, the system of policing in the United States is inherently broken. Token police reform is unable to change the foundation of racism. In order to create an America that is “great” for everyone, the police should serve a side role in maintaining safety in a trusting community. The system needs to be rebuilt to include lengthy mental health training, racial bias education, community outreach and necessary force training in order to ensure police wield less power. A culture of accountability needs to be created to continue to charge killer cops like Derrick Chauvin. Systemic change will need to happen to “rebuild” an America that is greater for everyone.

Immigration must be addressed urgently. In order to make America truly great, we must become the country that reflects the values in Emma Lazarus’s poem: “Give me your tired, your poor, Your huddled masses yearning to breathe free, The wretched refuse of your teeming shore.” We must find a way, consistent with economic and geopolitical realities, to welcome the immigrant and, especially, to be a refuge to those who need asylum. Eliminating child incarceration at the border is an urgently needed first step.

Women’s rights are under attack through restrictive abortion laws across the country. The administration’s response has so far been lackluster. A beginning would be saying the word “abortion” in the briefing room. Encouraging the Food and Drug Administration to regulate abortion pills based on medical science instead of politics would be important, and relatively non-controversial, first step. Appointing open-minded judges to federal courts is equally essential. The Supreme Court has also not weighed in on abortion although with States taking the lead it almost doesn’t matter that Roe v. Wade is predicted to be overturned.

Similar to the right of autonomy over one’s body, the right to vote is being restricted by Republicans with states targeting people of color. Texas, Florida and Georgia have recently approved legislation in local government to alter hours, prevent water from being given to voters in line, and give poll workers more intimate access to voters. These efforts are blatant attempts to suppress votes that lean blue, with many democratic senators addressing it. “We are witnessing right now a massive and unabashed assault on voting rights, unlike anything we’ve seen since the Jim Crow era. This is Jim Crow in new clothes,” Senator Raphael Warnock said. “Since the January election, some 250 voter suppression bills have been introduced all across the country.” It’s time not only to protect existing voting rights by passing H.R. 1, but to imagine new, and safe, ways to vote.

Although Lincoln described his house as not permanently divided, centuries later, ours seems stuck in Trumpism V. America. A remedy? Systemic change. Change that unites us in progress for a “greater” America.