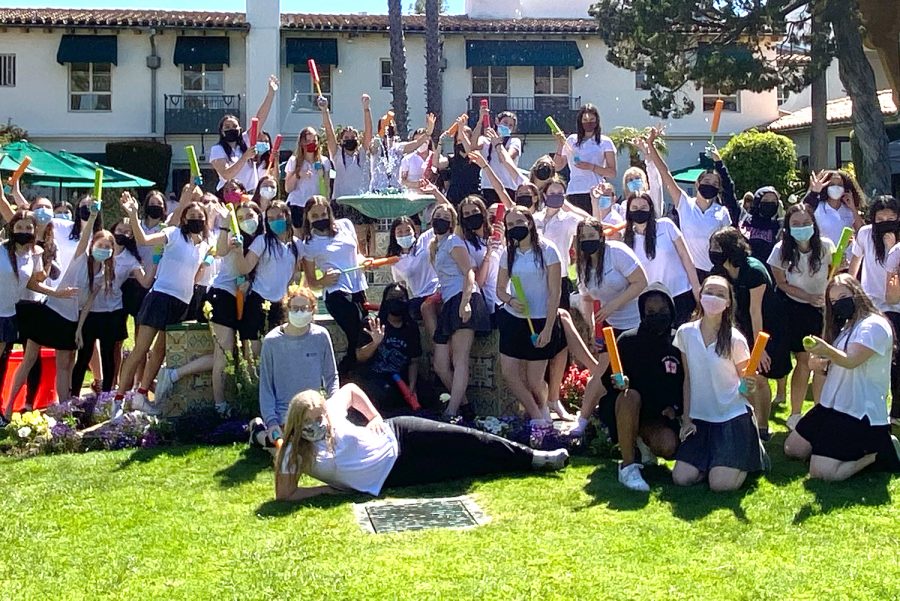 Water covering the courtyard, seniors drenched from head to toe and laughter echoing across the school are just a few highlights from the adapted fountain jump this year, according to Dean of Students Jenn Babin.

On Monday, May 24, at approximately 3:05 p.m., the Class of 2021 gathered in the courtyard to take part in the annual fountain jump tradition, where the senior class culminates their last day of classes by jumping into the fountain in the Eastern Star courtyard.

“Despite being apart for so long, I felt like no time had passed,” senior Ava Salomon said. “Seeing my peers soaked in water and screaming in the courtyard was definitely one of the best parts of my year.”

In Los Angeles County, COVID-19 cases are steadily declining, and the United States death rate is reaching one of the lowest levels since nearly a year ago, meaning public health restrictions are beginning to ease up. This development meant that the senior class could participate in the annual tradition but with certain protocols to ensure everyone’s safety.

“The fountain jump was actually pretty up in the air until about late last week when we were deciding how to approach it,” Babin said. “We wanted to make sure to get input from our seniors and handle it responsibly, while still honoring one of the most beloved traditions that we have.”

Instead of the standard tradition to count back from 10 and physically jump into the fountain, crowding as many students as possible in and around it, in accordance with COVID-19 guidelines, water squirters and buckets filled with water were laid out across the courtyard for seniors so that they could remain socially distanced. According to Nicole Farmer and Madis Kennedy, there was a lot of uncertainty amongst the senior class regarding if the event would actually happen.

“[The fountain jump] is the one tradition that we just weren’t sure if we were going to be able to do, so being able to adapt it and still have that experience is really meaningful to myself and my friends,” Farmer said.

According to Kennedy, the event still had the spirit of the traditional fountain jump, just with the addition of social distancing measures.

“The fountain jump is all about being together, and I was expecting that to be unachievable this year with the pandemic,” Kennedy said. “But it turned out to actually be a really positive experience.”

Senior Amelia Stone echoed Kennedy’s sentiment about the event being upbeat and fun.

“I think that it’s the tradition that every Archer student looks forward to,” Stone said. “It’s such a nostalgic process, and it made me really sad but also really happy just to see everyone and to have fun in that kind of way because I don’t think we’ve been able to do that for quite a while.”

The seniors have been remote for a majority of the school year, and the fountain jump is amongst the first activities of in-person Senior Week.

“I think the event actually made things feel final because things haven’t felt final yet, and I still feel very much like I’m just at the end of junior year,” Kennedy said. “So this made me really truly feel like a senior for the first time this entire year.”