A year of ‘silver linings’: Looking back at 2020-2021 season for Archer Athletics 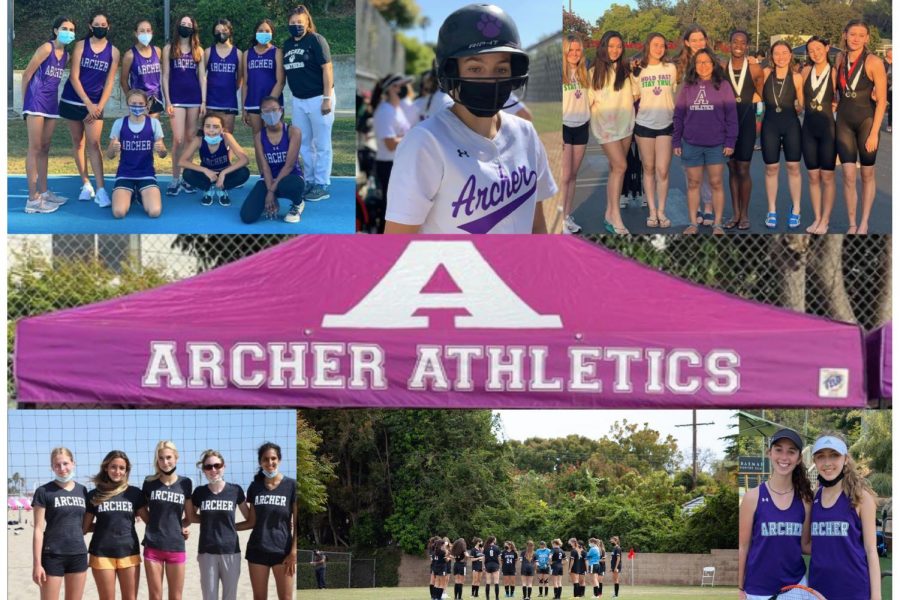 From soccer to swimming, basketball to softball and tennis to track, Archer Athletics are culminating their seasons that were met with "metal fortitude and joy" according to Director of Athletics Kim Smith. COVID-19 didn't stop teams from training, practicing and competing in the 2020-2021 seasons.

As the school year comes to a close so does Archer Athletics. From the soccer field to the swimming pool, athletes are hanging up their Archer jerseys for the summer break. Looking back at the 2020-2021 sports season, it was a year of “silver linings” according to Director of Athletics Kim Smith. The year was described as “flexible” by athletes and coaches alike.

Smith spoke to looking back and reflecting upon the past year. She highlighted the range of changes and eventual outcomes of the athletics season altered by COVID-19.

“At the end of something, I really like to take a look at the beginning and see the quite remarkable distance we all made from the start to the finish and the different versions of athletics from online to conditioning, to sports specific conditioning to team training to competitions,” Smith said. “Along the way, it was this unfolding of silver linings, and it wove this story of courage and resistance and metal fortitude and joy.”

Gabby Wolf, a junior soccer player, has been a member of the Archer soccer program since the seventh grade. While she had to make adjustments, such as balancing her club and school soccer schedules, she also noted a recurring pattern of her years on the team.

“In general, we have such a small pool of kids to choose from at Archer, and yet we dominate every year, and this year was no exception,” Wolf said.

For sophomore Rachel Heyman, Archer swimming acted as a break from the pandemic. Heyman said it gave her a “normal moment” during the abnormal year.

“For me, swim became an outlet because COVID kept us in our houses for so long that I looked forward to going to the pool,” Heyman said. “It felt almost like COVID didn’t exist, for a couple of hours, which was so nice.”

Throughout the athletic year, there were multiple implementations and changes of restrictions. Smith had originally scaffolded different scenarios for any oncoming challenges. As restrictions were implemented and lifted, she emphasized the role of the athletes and their motivation.

“Honestly, I couldn’t be prouder of the athletes. To be able to be flexible — having to adjust and adapt and set new goals, it’s really challenging, and what I witnessed was as things were opening up the goal was to connect with the joy of your sport and connect with your teammates,” Smith said. “Having that as the goal made it not easier to show up, but it pulled everyone together and motivated everyone to move forward.”

While some consider having a season at all to be a triumph, Wolf spoke about the challenge the soccer team faced this season as well as in previous seasons. Varsity soccer made it to the CIF quarter-finals. Although they didn’t advance, they are making that their goal for next season.

“We wanted to break the curse this year, our quarter-finals curse, so we tried to get past this year but it’s okay; that’s our goal for next year,” Wolf said.

Similarly, looking to next year, Heyman is hoping to get team normalcy back. From “normal” meets with spectators to showing up as a team, she is excited for the 2022 swim season.

“Something that I am excited for is taking a bus all together to go to the pool,” Heyman said. “It was just such a fun time because this past season I would just drive there with myself, or my sister and it wasn’t the same as showing up with the entire team.”

Wolf also talked about her excitement to reimplement traditions into the next soccer season.

“Especially the sleepover – it’s our iconic tradition and the seniors didn’t get it this year,” Wolf said. “So, I really want to be able to plan that out and make it memorable for the freshman because I know that was one of my best memories.”

Overall, Smith described up the pandemic year of sports as a “challenge” that athletes had to face starting as an individual competitor and eventually leading to reuniting as a team.

“Along the way, athletes were able to rise to whatever challenge was there because they had their team,” Smith said. “And it all started with individual motivations, and then you got to connect with your team.”