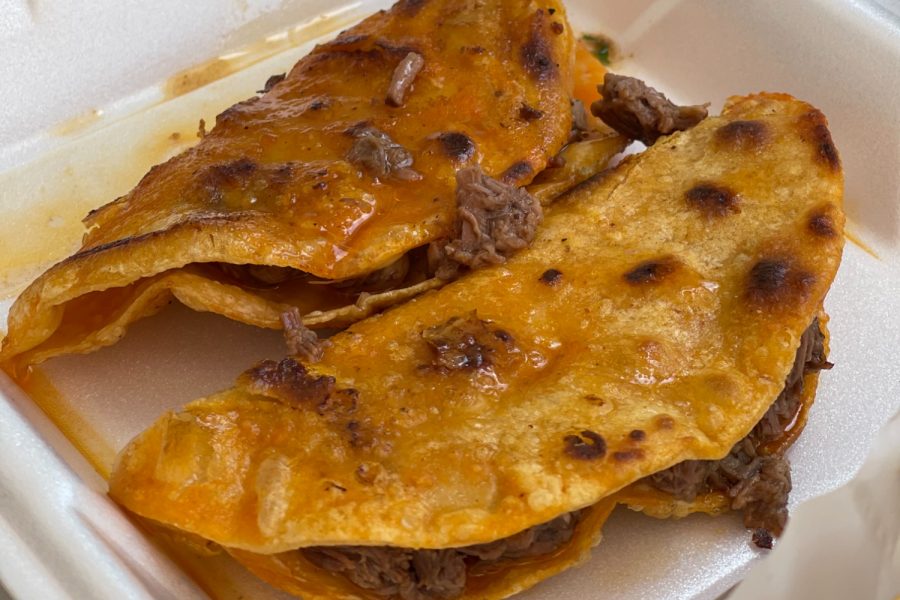 The traditional Quesabirria tacos with beef which can be dipped in consomé sauce. A staple item at Tacos y Birria La Unica food truck and the main event of the whole taco truck experience.

Imagine a tortilla. Imagining it? Ok, good. Now imagine that tortilla filled with the juiciest and most flavorful meat you have ever tasted; meat that has been marinated to perfection for over an hour and a half. Now, imagine frying that deliciousness in traditional Oaxacan cheese. Finally, picture yourself dipping that into the sauce of your dreams: the juice of the marinated meat topped with a healthy helping of cilantro, raw onions and a squeeze of fresh lime. What you are currently imagining, and hopefully craving, is the traditional Mexican street food: Birria tacos.

Birria tacos have recently started to gain popularity throughout different social media platforms, and they are slowly taking over the food truck scene in Los Angeles and throughout the US, attracting all sorts of customers. However, this delicious dish isn’t native to California and has a rich history that is definitely worth exploring.

Originating in the center of the Mexican State Jalisco, Birria tacos are traditionally made with goat meat, but have since evolved and can now also be found with various types of beef. In the 16th century, the Spanish brought all kinds of animals and spices with them to Mexico, including goats. The goats destroyed their crops and unlike pigs and cows, made for much more gamey meat.

While goat meat didn’t compare to that of other farm animals, the Mexican people were still in need of more meat sources in their food. And because necessity is the mother of invention, they developed the perfect way to cook goat meat: by tenderizing it for extended periods of time and adding a variety of heavy spices in the process. Thus, the Birria taco meat was born and has become an integral part of Mexican street food ever since.

Over time, the deliciously crispy tacos moved north to Tijuana and eventually landed in Los Angeles. Since then, Birria tacos have become a food truck staple in major parts of Southern California.

The truck includes its own seating area complete with a number of tables and chairs enclosed by a large tent. People can comfortably enjoy a Corona or Agua Fresca with their delicious, albeit very messy, tacos while chatting with other customers and creating an atmosphere like no other food truck.

On my own journey to this particular truck, I decided to go all out on my order because, why not? I ordered six Quesabirria tacos (Birria tacos fried in cheese are called “Quesabirria,” whereas the traditional cheese-less ones are simply called Birria tacos) with the dipping sauce, called consomé. I also impulsively purchased four regular beef tacos, which, although amazing, could not compete with the masterpiece that is a Birria taco.

So, on a sunny, yet windy, Saturday afternoon, I sat contently holding a 16-ounce ice-cold horchata in one hand and a crispy Birria taco in the other. Consomé dripped onto my white shorts, my hair held a vague scent of onions and my hands were covered in grease, yet everything was just right. I could feel my worries slowly slipping away; I was in heaven, and later, a food coma.

After unapologetically downing the last bits of my tacos and slurping up the tiny drops left of my horchata, I got a chance to speak with one of the workers on the truck. He was an incredibly kind man who ended up giving me a free “mystery taco” (he later told me it was goat meat) that I devoured in about 3 seconds. My food truck experience would not have been complete without a mystery item for me to test out.

Tacos y Birria La Unica is definitely the place to go for your first—and certainly not last–Birria taco experience and to get acquainted with the mouthwatering slice of heaven that is Mexican street food.