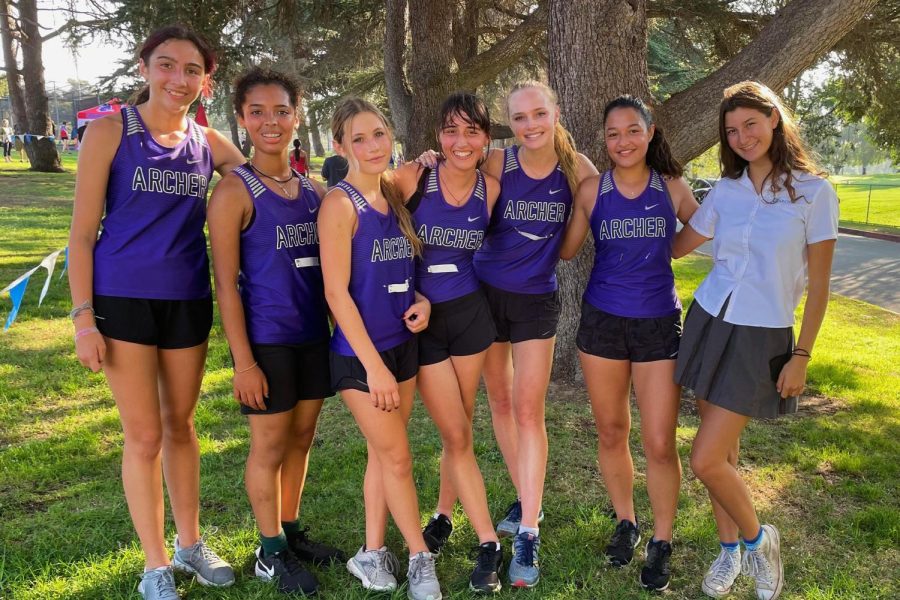 Members of the varsity cross country team celebrate after placing second in their first Liberty League meet of the season. They trained throughout the weeks prior to prepare for the meet. Pictured from left to right are Maya Acutt ('25), Kayla Bruce ('24), Kate Hanney ('25), Gabriella Specchierla ('25), captain Lauren Robson ('22), Ali Aragon ('22) and Keera Levell-Guerrero ('23).

By Surya Patil and Lucy Williams

After a year and a half of online learning, Archer’s varsity cross country team is sprinting back into the swing of things for their fall season. On Sept. 14, the team attended the first Liberty League meet at Balboa Park in Encino and came in second place.

The first in-person meet in almost two years was a return to long-awaited normalcy for the team, according to freshman Kate Hanney. She said the meet was a “great” bonding experience.

“I’m a very nervous person so [the meets] are very scary for me … I just have to calm myself down in my head but my teammates always seem to help,” Hanney said. “We talked about how we [felt] beforehand and helped one another.”

Ena Leufroy has been the Archer varsity cross country coach since 2019, a few months before remote learning went into full effect. She leads practices six days a week with the help of senior captain Lauren Robson.

“My goal for each individual is for them to be more in tune with their body and to run their own personal best times at the end of the season,” Leufroy said.

The team’s day-to-day practice includes diverse activities such as running distance, sprints and strength training. The practices usually take place in the Brentwood neighborhood or at the Brentwood Country Club. Leufroy’s coaching style differs from the majority of cross country coaches due to her opinion on training mileage.

“I don’t believe in a lot of high mileage because I know it can be very detrimental to kids if it’s not done properly,” Leufroy said. “I tend to stay in the more moderate range of mileage.”

Robson said that the COVID-19 pandemic had a significant impact on the team’s dynamic. They were separated for a whole season, so training was not as constructive as usual. The cross country season was pushed into the spring and cut short due to the pandemic resulting in few in-person practices.

“There’s been a huge shift in the team culture between this year and last year because a lot was online last year,” Robson said. “It was hard to connect with the team and feel bonded with them … and this year the team is a lot more connected, we’re able to do more team bonding.”

Junior Keera Levell-Guerrero spoke to the relief of having an in-person team and a normal practice schedule. There are currently eight practicing athletes on the cross country team. Levell-Guerrero is currently sitting out this season due to injury but still considers herself a part of the team.

“Last year, we were not that connected especially because we were only practicing two days and week and we just didn’t get a chance to truly talk to each other as a team,” Levell-Guerrero said.

The team has high hopes for the season and is working to achieve their goals of “winning first place at [their] upcoming meets” and making it to CIF prelims,  Robson said. Their season began at the start of school in late August and will end around November, depending on how far the team gets into CIF, (California Interscholastic Federation) for preliminaries.

“I am most looking forward to the league finals this season because that will culminate our league season,” Robson said. “We’ll be able to see all the progress we’ve made and all of the hard work we’ve been putting in.”