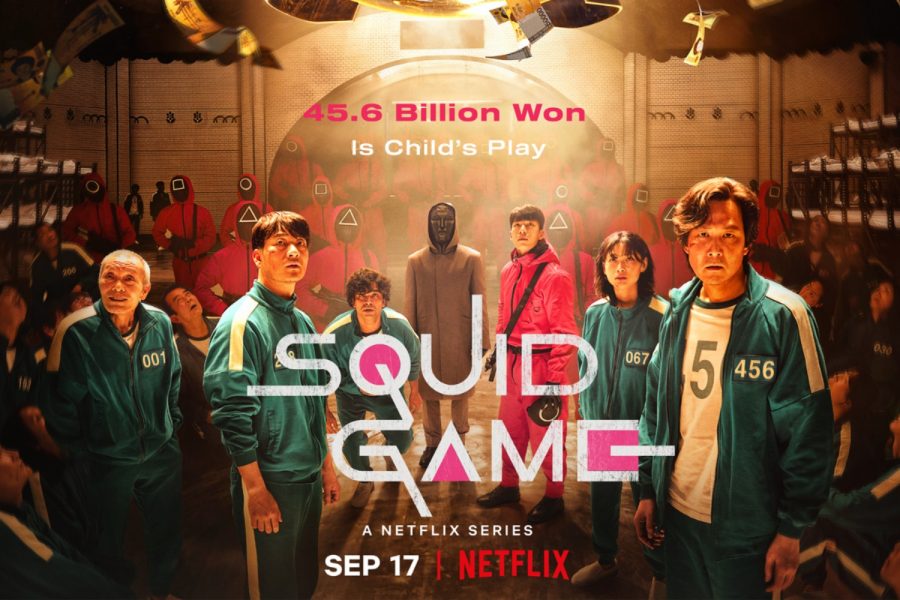 The new Netflix sensation "Squid Game" is taking over people's lives, from Korea to America. The thrilling, engaging and suspenseful show is one of many to come from the Asian community.

Alongside just about everyone in the world, I have spent the last week watching all nine thrilling episodes of Netflix’s new hit TV show, “Squid Game.” All I can really say is wow.

The South Korean drama series first premiered on Sept. 17, 2021, and is on track to become one of Netflix’s biggest shows ever.  The show is centered around 456 players who all have one thing in common: they are deeply in debt. In order to escape the pressures of their lives, they decide to gamble them in a series of children’s games, and if they win, they can claim a cash prize of $45.6 billion won (roughly $39 million US dollars).

The first game that the players participate in is a play on an old Korean children’s game called Red Light, Green Light. This is the first look we get at the underlying sadistic nature of the games. The game begins with everyone along the starting line, standing in front of a giant mechanical doll. When this doll says “green light,” everyone must move towards the finish line, but if the doll says “red light,” you must immediately stop or face the consequences. On top of this, the doll is a motion detector, so if you are caught moving during a “red light,” the players are gunned down on the spot.

As an avid viewer of this series, I have been watching its rise in popularity over the last couple of weeks and the media attention surrounding it.

This sudden spike in attention toward the Asian community has made me think a lot as well. Was it not mere months ago we were being harassed and assaulted in the light of COVID-19? Why has there been such a dramatic shift in the media coverage of Asians and Asian-Americans? It’s almost as if people view us as “commodities”; people only care about what new, interesting things we can produce, and not how we are being treated. No one seems to care about anything as long as they have their entertainment because, well, who would want to talk about hate crimes when a new BTS song just came out?

We seem to be constantly starting and stopping. There is no consistent broadcasting of the struggles Asian-Americans go through repeatedly, and this is what leads to these discrepancies in media coverage surrounding our community.

One step forward, one step back.

From the 2019 thriller “Parasite” and the rise in K-pop and anime since 2020 to the 2021 action film “Shang-Chi” and to now, “Squid Game” it seems like people are treating Asian culture as a trend they can participate in. Periodically, there’s an increase in attention and media coverage surrounding Asians, but I’m starting to notice just how little this coverage ends up being about something actually important, that isn’t just a new song, movie, or food you should try.

Don’t get me wrong, I don’t think that this shift in attitude is an inherently bad thing, but just because “your new favorite show” came out, doesn’t mean that you can put a pause or ignore the accelerated racism Asians have received since the start of the pandemic. I’m all for sharing my culture, and seeing other people appreciating it makes me so happy, but people are choosing what and what not to talk about the Asian community. They don’t want to talk about the harassment Asian-Americans endured throughout COVID-19, but because of social media trends, everyone is eager to talk about Squid Game and their opinions on the show. This cannot be tolerated.

There is no this or that. These people worship all the popular aspects of Asian culture yet turn a cheek when presented with real issues as if they’re sliding and stopping on the coarse dirt in the eyes of the doll itself.

Maybe it’s all part of the game.

Love us, hate us.