Executive Board of Advocacy and Diversity establishes goals for school year 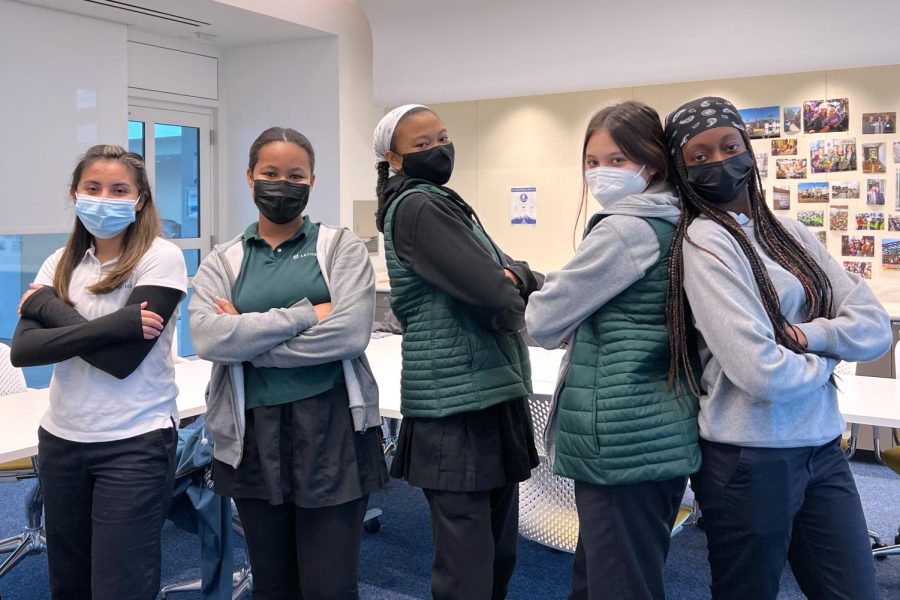 During mentorship on Dec. 9, seniors and board members of EBAD, Mikaela Foronda-Zanipatin, Evan Bowman, Lexi Tooley, Layla Huber-Verjan and Chidimma Nwafor, presented a broadcast showing students' and faculty's winter celebrations. “I truly love EBAD; being able to educate and inform the Archer community on various issues all revolving around the idea of advocacy and inclusivity and brings me a sense of happiness," Nwafor said.

This school year, the board that was previously referred to as the Diversity Conference Leadership Team, is now formally known as The Executive Board of Advocacy and Diversity. Typically, each January, there is a one-day diversity conference that consists of presentations, public speakers and affinity groups held for all students and faculty. Instead of having a one-day conference this year, EBAD decided to focus on spreading diversity in student life throughout the entire school year.

Part of the EBAD mission statement is to, “seek to broaden our awareness and understanding of the diverse identities and cultures reflected within local and global communities in the hope of engendering a greater sense of trust and acceptance.”

They aim to empower people through knowledge by eliminating assumptions and stereotypes based on race, gender and religion.

Senior Chidimma Nwafor has collaborated with the other members of EBAD to ensure that the year ahead is productive and successful. The group has set goals across the board to ensure that EBAD is a constant symbol of representation and community engagement.

“One of the roles we have is to advocate for advocacy and diversity,” Nwafor said. “We added in advocacy this year — that we’re advocating for all members of our community and ensuring that everyone feels safe and included in talks of diversity, equity and inclusion.”

This year, Dean of Student Life, Equity and Inclusion Samantha Hazell-O’Brien joined EBAD as one of the advisers. She said she is excited to begin working with EBAD as the students are “hard working” towards their aim of raising awareness, identifying marginalized voices and ensuring a sense of belonging in the community.

“This year we are adding an extra element, which is advocacy. We’re really trying to connect with all the different affinity groups to make sure that we’re elevating those voices,” Hazell-O’Brien said. “[EBAD leadership] is trying to build a community while also managing their schoolwork and their lives … they work so incredibly hard — they’re selfless, and it’s not about them.”

Sophomore Piper Porter believes that having several opportunities to showcase diversity throughout the year will help people remember the information taught to them rather than absorbing a lot of material all in one sitting. She said that being a part of EBAD allowed her to expand her leadership skills and be able to do something that she loves.

“It’s nice to get to know new people, especially because a lot of the girls who are on the board or were on it last year — it is great to see them in their element,” Porter said. “Having great communication with the administration, teachers and with certain affinity groups I enjoy.”

Even though the diversity conference was cancelled, Nwafor outlined how EBAD promotes diversity throughout the entire school year. She said that one of their goals as a board is to make sure students’ voices are heard across campus.

“All of those aspects that people used to see in the conference will simply be implemented throughout the year, and more programming will be added,” Nwafor said. “You’re still going to get those lectures, meetings and presentations, but instead of it all being condensed into one day, it’ll be spread throughout the whole year in different forms.”

Last school year, Porter said she was looking forward to returning to in-person school, working on presentations, meetings with her peers and communicating with students in person rather than via email.

“I’m excited to keep getting to know the board members, the teachers and the administrators … and getting to communicate with the affinity groups. I’m most excited to help students at Archer who are part of marginalized communities feel heard and safe,” Porter said.

Hazell-O’Brien said she joined EBAD because she was working with a similar student organization before she left Marymount High School, and she wanted to be a part of similar administration when she came to Archer. She discovered DCLT at the time and said she was “excited” to be able to continue to promote student voices while also encouraging diversity.

“It was brought to my attention that DCLT was doing parts of connecting with different affinity groups and advocacy groups to best support them, along with amplifying student voices, but dedicated to one day, and in my studies’ best practice is to really make sure that equity and inclusion is an everyday process,” Hazell-O’Brien said. “Not just pigeon-holed into one day where you celebrate how to take the different cultural aspects, but instead a habit [that is ongoing].”

Porter said she was involved in the Black Student Union at her previous school and is working hard at Archer to bring those same leadership qualities to the greater school community.

“I was heavily involved in BSU and in trying to inform the school community more about the Black Lives Matter Movement, and how they could do a better job at making the school a safe space for their students of color,” Porter said.

Nwafor has been a part of EBAD since she was in 10th grade. As a board member for the past three years, she has observed the changes and seen the program expand in numerous ways.

“What I enjoy about EBAD is the fact that we are that group of people on campus who can solicit these conversations regarding race, ethnicity, equity, religion, gender, sexuality — anything of the sort,” Nwafor said. “Being able to lead my peers and some of my mentors in conversations has been fulfilling.”