Column: Down to Kogi town 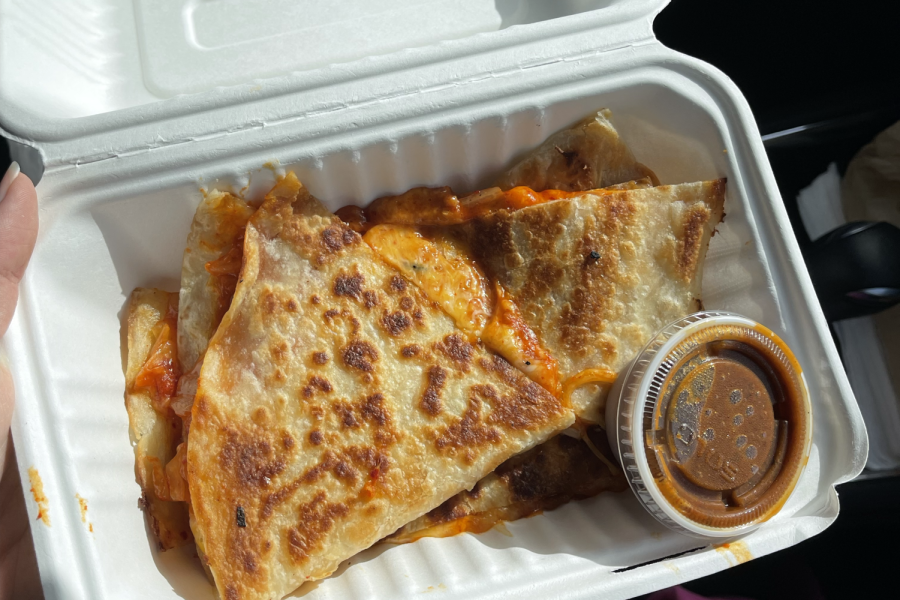 The delicious Kimchi Quesadilla with spicy Korean hot sauce is displayed in the plastic container from the Kogi food truck. This meal combines the perfect blend of the cheesy Mexican classic, and the refreshing Korean household staple.

There were way too many food trucks I wanted to write about for this month’s column, but as soon as my eyes saw the words “Melding together Korean and Mexican flavors” flash across my bright screen as I was researching the best food trucks in LA, I knew what my next adventure would be: Roy Choi’s famous Kogi truck. And let’s be honest, what would this column be if I didn’t explore the Kogi BBQ phenomenon that has swept Los Angeles and “changed the way Americans eat” one short rib taco at a time?

Now, let’s start from the beginning. According to the Kogi truck website, Roy Choi was born in Seoul, South Korea, in 1970. He came to California for high school and after graduating college from California State University, Fullerton, he was recruited by the Cheesecake Factory founder David Overton to help open an Asian restaurant called RockSugar. Choi was later fired from the restaurant after struggling with the large menu, which was something he wasn’t used to.

Choi was in desperate need of a job, when his friend Mark Manguera, a Philippines-born, California-raised chef from the Beverly Hilton, called him with an epiphany. Manguera had been drunk, eating Mexican food when he wondered: why wasn’t anyone adding Korean barbeque to a taco? And thus, the Kogi food truck empire was formed through (like most wonderful creations are) a drunken revelation.

Now that the origin story is all sorted out, let’s talk about my trip down to Kogi town. I brought along my friend Naya Ben-Meir, a fellow senior who, much like myself, will try anything (and I mean anything) once. I selected my best pair of overalls, wisely anticipating that my stomach would need room to breathe, and Naya threw on her trusty Birkenstock slippers. We were officially prepared for the food truck battle.

We arrived at the Taqueria on Overland Avenue after a 20-minute drive of excited screams, rumbling stomachs and Mac Demarco to keep us company. Parking was very easy; you could pull right up in front of the truck and essentially order from your car.

We got to the truck and were met with absolutely no line, a sign from the heavens. Then, because Naya and I both have no self control, we ordered half of the menu. After skillfully locating the perfect shady parking spot to try our food, Naya and I got down to business.

Next, we tried the short rib taco, Kogi truck’s signature dish. Double caramelized Korean barbecue short rib, a salsa roja made from Korean and Mexican chilies, cilantro-onion-lime relish and chili soy Kogi slaw. All ingredients over two, crisply-griddled corn tortillas. This was a taco made to be worshipped while perfectly combining both Korean and Mexican flavors.

After our quick trip to short rib utopia, we dove into the kimchi quesadilla, an unlikely yet delicious combo. Kimchi is a staple in Korean cuisine and is essentially a side dish of pickled vegetables with various seasonings, including gochugaru (Korean chili powder). The cheesy crispness of the quesadilla, paired with the spicy yet refreshing pickled vegetables creates a mouthwatering sensation like no other. Definitely worth every penny.

Next up was the carne asada burrito, which was very cheesy and juicy, but nothing special in our opinion. It definitely could have used some of that chili sauce from the Calamari tacos. After that, we dove into the Korean spiced fries, which were basically super crispy fries topped with different Korean spices. Like the burrito, the fries could have used a sauce to top them off, but that didn’t stop us from devouring all of them and getting ketchup everywhere.

For the finale part one, we dove into the Kogi hot wings. Two huge chicken wings topped with Korean hot sauce with garlic and gochujang. For this dish I recommend not eating in a car and using utensils. We followed neither of those instructions and ended up covered in delicious Korean hot sauce. Finale part two was of course the Kogi dog: a perfectly cooked hot dog topped with a Korean cabbage salad and siracha. We definitely ended with a bang.

All in all, the Kogi truck was well worth the hype. It is a seamless blend of Mexican street food staples and Korean classics; perfectly combining the spices and sauces of each culture to make a food lover’s dreams come true.