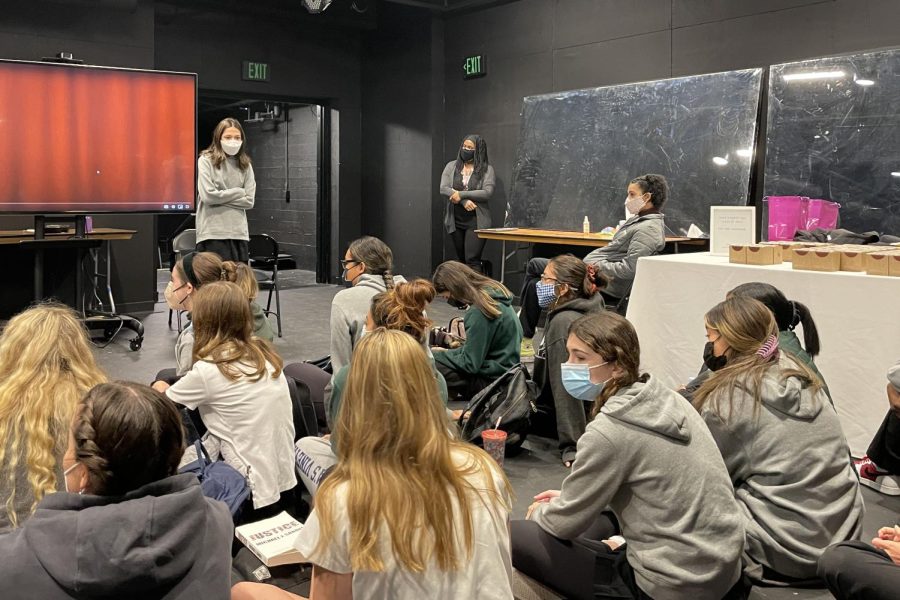 Seniors sit in the Blackbox Theatre as they wait for a video of college advice from Archer graduates during a surprise celebration. The celebration during US-FLX block also included Sprinkles cupcakes donated by the Archer Parent’s Association.

As winter break nears, Nov. 1 and 15 have officially passed, and so have the first milestones of college application deadlines. To celebrate the hard work of the senior class and the upcoming college decisions, college guidance counselor Ivan Hauck, class representatives and 12th grade Dean Kathleen Bergen organized a surprise celebration for seniors in the Blackbox Theatre.

“Me and the class representatives, Ava and Naiobi, really wanted to celebrate the grade in general because we know that this is so hard. So, we spoke to Mr. Hauck and Dr. Leggins and Ms. Bergen,” senior class representative Andrea Ramirez said. “We planned this out so that you guys could get some love from the older grades and also just a quick snack to be happy.”

The celebration began with a video of students from the Class of 2021 sharing advice, stories and words of wisdom to this year’s seniors. The video featured graduates from all over the country, including a student on a gap year and one studying abroad, all of whom assured the seniors that the college process will work out.

“It definitely relieved my stress, because I was really nervous — I know everyone always says, ‘Oh, you’re going to get it or you’re going to get in,’ but hearing it from them and taking into account that they’re living [in college] right now, it’s great,” senior Maggie Hamilton said.

After the video from class of 2021, seniors were provided with cupcakes from Sprinkles Cupcakes as a gift from the Archer Parents Association. Earlier in the year, seniors were also given goodie bags and cookies from the APA in support of their hard work during the first semester and college applications.

“I actually think it turned out really good, especially since we had little time to plan it right. But, I think everyone really enjoyed it, especially the video from that other class,” senior class representative Naiobi Benjamin said. “It was fun and sweet, and I think it was really nice for people [who are] worried right now about the college process.”

Closing out the celebration, a second video was played. This time, the video showed the name of every student in the grade with a sentence of appreciation and praise written below. The video was put together by the class representatives and Hauck. Afterwards, each senior received an envelope with compliments about them written by the senior and junior class.

“I think that, to me, the coolest part about that was the fact that everybody had multiple comments about them without any kind of engineering,” Hauck said. “The fact that it naturally happened — that every single person in this community was truly valued in one way or another — speaks again to you all in the class and the fact that you’re not just having an impact on each other but also the entire Archer community.”