Get to know our journalism adviser: Kristin Taylor 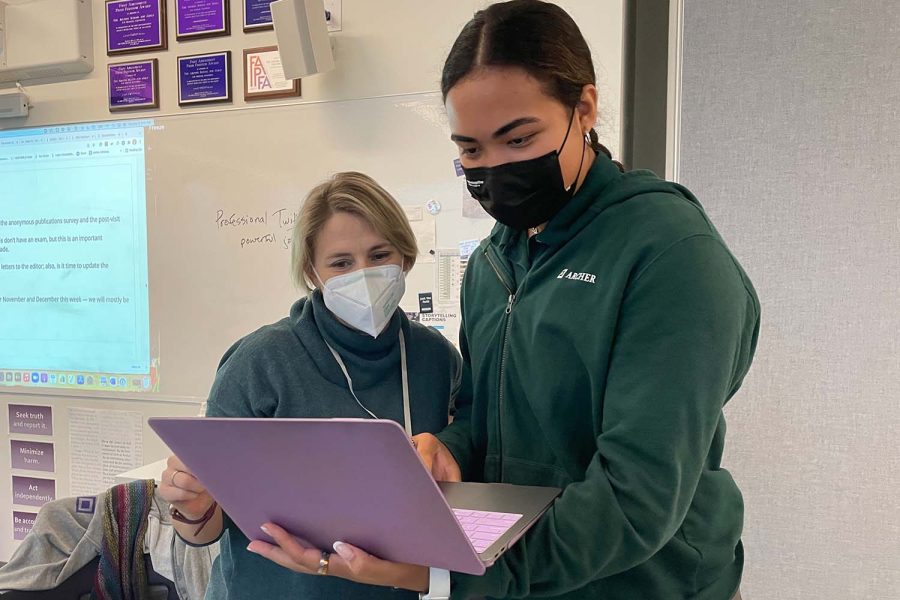 Editor-in-Chief Vaughan Anoa'i and Kristin Taylor discuss Oracle-related matters in the Publication Laboratory. "Ms. Taylor has served as an inspiration for me on the Oracle and just in general," Anoa'i said.

From the First Amendment all the way to AP Style, Kristin Taylor knows journalism. But that wasn’t always the case. Taylor advises both Archer publications, The Oracle (online newspaper) and Hestia’s Flame (yearbook), and is the Director of the Scholastic Press Rights Committee (SPRC). Now, in her 25th year of teaching, Taylor reflects upon her experience serving as a journalism adviser.

Taylor inherited the Oracle when it was still a club in 2011. She developed an official class in the 2013-2014 school year. The Oracle received an NSPA Online Pacemaker award for the first time in 2015. Taylor received her Master’s degree in journalism from Kent State University in 2018. She was one of four national CSPA Distinguished Advisers in 2020.
What differences do you see from the beginning of The Oracle to now, and how have you been a pivotal role in those changes?
Kristin Taylor [KT]: “The biggest difference is building a culture. It takes years to build a program and to build a reputation for that program. And, I think the biggest change, between 10 years ago and now, is that 10 years ago, I was learning alongside the students. But now that I’ve had a decade of experience and a Master’s degree [in journalism] and everything else, I can sincerely say I’m an expert. So, I was able to step back and let editors and students become leaders. And that’s, again, about building a program because you can’t really build a program that is self-sustaining until you have students in the program for multiple years. I think, as a new teacher, I’m always a student alongside my students. I’m always learning alongside them. As I become more proficient, my students become more proficient. They are then able to be the leaders in the program with me, facilitating and guiding the program further, growing the program’s reputation and culture.”
What is the biggest roadblock you have hit in shaping the Oracle and how did you overcome that?
[KT]: “Time is always the biggest roadblock because to become proficient in something, you need to practice it a lot. Although Archer did help me with my Master’s program financially, the majority of those costs were my own. It was a personal financial investment in that program, but, also, making the decision to take this on. I mean, sometimes I’ve had to make sacrifices. I don’t get my English grading back as fast as I used to, and that’s because I have so many other commitments with publications that I’m always having to prioritize. I’m always having to decide what do I have to get done by tomorrow? What can be put off another day? And how can I do that in the fairest and equitable way possible?”
What other challenges did you face regarding the transition from teaching English to teaching journalism?
[KT]: “I was a very competent English teacher. But, I was a complete novice when it came to [being] a journalism teacher. That was hard. The feeling of being new at something, and not knowing what I was doing. Now, I feel much more confident about that, although it’s taken many years. I really think it’s that combination of my time and the willingness to take that risk: to be new and to not be good at something. I care very much about being good at things. Not because I’m trying to prove anything, but more because I care about the program. And ultimately, I mean, I fell in love with student journalism. I saw what it did for students. I saw how much power and empowerment it gave my students. I saw how much better they got at writing. I saw how much more competent they became. I saw them become leaders. That’s a special kind of bond, that as much as I love my English students, I just don’t have the time over many years to build those relationships. For those reasons, I couldn’t do it halfway. I’m not someone who does something halfway. I either do it well, or I don’t do it at all.”
What are three words you would use to describe the Oracle?
[KT]: “Ethical. Hardworking. Family.”