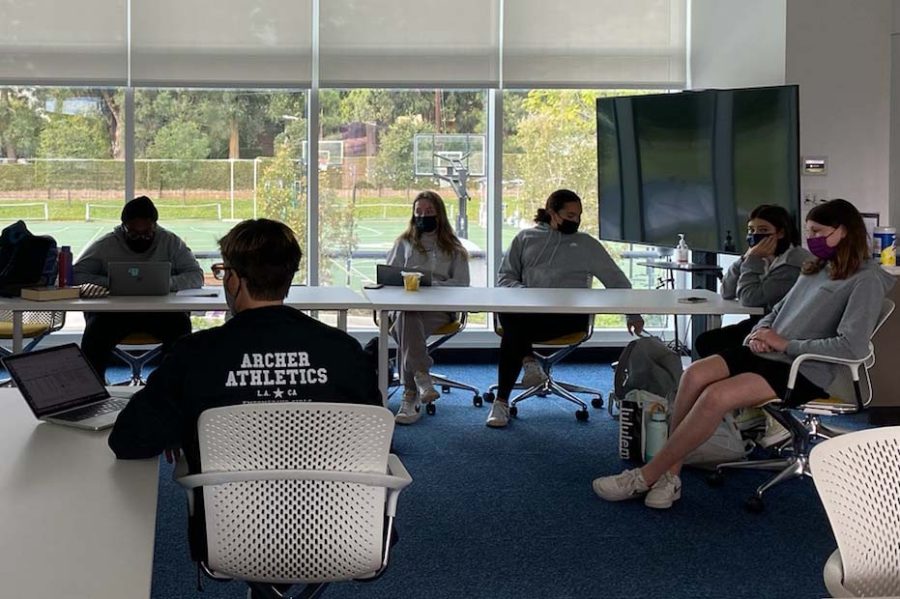 Athlete Leadership Council members sit at a table in the Lantern Room during their meeting. The ALC meets every Tuesday at lunch to discuss and coordinate their responsibilities. "We are currently, as a group, we brainstormed ... who we'd like to hear and what's needed," Director of Athletics Kim Smith said. "And so we have a list and so we have some potential speakers for March 8."

While Archer athletes practice their sport, commit to play in college and compete against other schools, the Athlete Leadership Council plays a lesser-known and behind-the-scenes role of Archer Athletics. The council was originally created last year to help rally the Archer community around sports during COVID-19, and now, ALC has transitioned to their in-person roles.

In the midst of the pandemic, Director of Athletics, Kim Smith, and the athletics department developed the ALC to help with athletics involvement.  With a board made up of athletes who applied for the positions, they began to develop their presence.

“Athletics wanted to be able to create a platform for student-athletes to grow as leaders,” Smith said. “And we created it during COVID as an opportunity to connect … they were deprived of the ability to team which develops our leadership skills. And so that was developed to help develop leadership skills over Zoom.”

Senior Cristina Fuentes-Alva joined last year and has continued her involvement throughout this year. As a varsity basketball player, she decided to take on a different type of leadership within the community.

“I personally, during quarantine, felt like I wanted to find a way to still be involved in athletics or have it be part of my life because that was just the culture around school — the way I was surrounding myself,” Fuentes-Alva said, “and I wanted to have that similarity.”

Senior Presley Sacavitch also joined last year during quarantine. As a varsity soccer athlete herself, she missed the bond that she had with her team and was looking to emulate that.

“During quarantine, I had so much free time,” Sacavitch said. “And when the opportunity came up, I thought because we had missed out on the athletic bond and community … it would just be a good idea to have something to do, and to also get more involved in athletics because we couldn’t do anything.”

Last year, a lot of the responsibilities of the council were digital. Their jobs included facilitating the Panther Speaker series and keeping up a social media presence. Now, the transition to an in-person school year caused the ALC to change. Sacavitch said as members, their roles have become a lot more hands-on, planning events like pep rallies, college signing ceremonies and an in-person speaker series.

“We’ve run a lot of the athletic stuff behind the scenes,” Sacavitch said.

Fuentes-Alva discribed their new roles in the community compared to last year.

“We make posters. It’s more of a hands-on thing,” Fuentes-Alva said. “Last year was just meeting with speakers and preparing and finding ways to promote or share athletics through social media and digital platforms.”

Along with an overall more active position the community, the council as a whole has become smaller compared to last year.

“Council is a smaller number of participants,” Smith said. “However, it’s quality. So within that, we have a promotion team, a design team and a Speaker Series team. And then we have two student athletes that oversee all the work that’s being done.”

Overall, Sacavitch described her experience as an ALC member as being “flexible.”

“With a lot of clubs, or other advisory boards or councils, it can also be really intimidating,” Sacavitch said. “But ALC is — it’s a commitment, don’t get me wrong. I’ve spent some nights staying up late painting some posters, but it’s never becomes something that I dread.”

Looking forward, Smith and members spoke to what they hope the future of the ALC in the Archer community is.

“I really hope it doesn’t go away,” Sacavitch said. “I also really like helping out Coach Smith. She was really trying to handle all of this stuff when we were online, but now that we’re in person, I feel like — if ALC is still up and running — then it can be much bigger.”