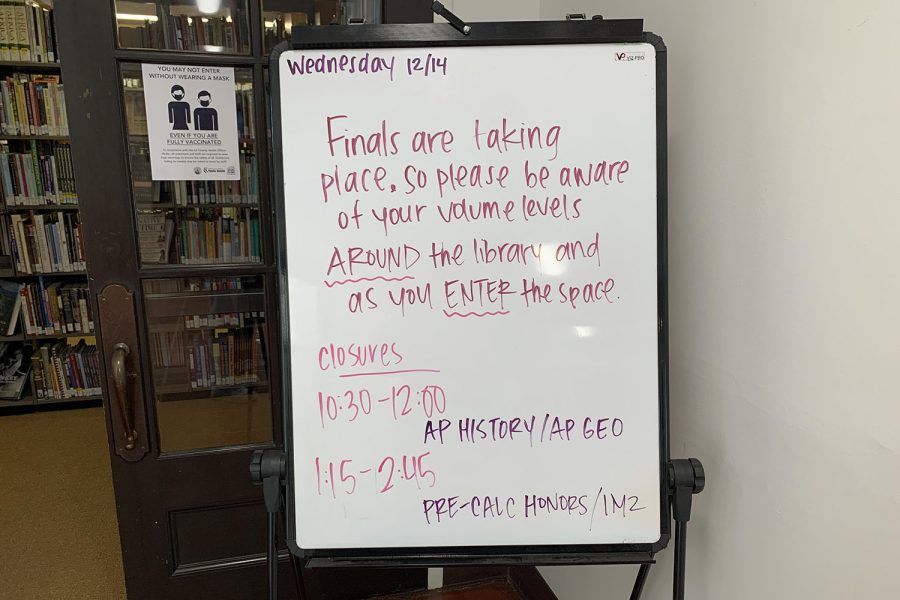 A board displayed outside the library on Wednesday, Dec. 15, the first day of finals. Since middle school students still follow the regular schedule, the board reminds them to please be quiet around campus. The first day of upper school exams was on Dec. 15 and continues through the rest of the week.

The week of first semester finals is Dec. 15-17. Director of Academic Operations Kasey Nott sent out the finals schedule in an email on Nov. 30, which announced that upper school students will have five finals in their core classes. History and math finals were scheduled for Wednesday, while English and science are on Thursday. Language finals are on Friday before students are released at 12:00 p.m., marking the start of winter break.

This year is the ninth graders’ first year taking finals. Freshman Julianna Hatton described how she planned to prepare.

“As it gets closer, I’ll probably organize my binders and say ‘Okay, this is what I need to do for the subject,’” Hatton said. “[I’m going to] make sure that I’m organizing what I need to do, so I’m not wasting time or trying to study things that I don’t need to actually know.”

“I’m definitely a lot more stressed because they’re not online,” Dembo said. “They’re in real life, and I have to be at school for three days and be in a room. It’s really stressful.”

Despite the stressful nature of this new style of finals, Dembo said she has persevered and started preparing early.

“I started [studying] a week ago, just getting things together,” Dembo said. “I’ve just been looking over my notes, studying them, looking at the Learning Hub and seeing what teachers are putting on [it].”

Senior Alexa Marsh, however, has had experience with in-person finals before. Marsh’s experience allowed her to know the importance of proper preparation over finals week.

“I’ve been planning ahead and giving myself times where I’m going to study,” Marsh said. “I saved that weekend before finals for just studying because that’s what I’ve done in the past, and it has helped.”

Because of the stress that naturally comes with finals, many take time to indulge in some self-care. To manage stress, Hatton said she plans to use sleep to rejuvenate herself.

“I’m definitely a big sleeper,” Hatton said. “I normally sleep 10 hours a night, so I’ll definitely try and keep that up.”

Hatton also commented on the prioritization of mental health during finals week.

“Spending not too much time obsessing over finals [is important], because in the grand scheme of things, [they’re] important, but I also think mental health is really important,” Hatton said. “So, if you’re taking too much time worrying about it, it’s better to just relax, go take a nap, read a book and kind of chill for a second and then come back to what you were doing.”

Marsh agrees that mental health is key when preparing for finals week.

“Honestly, if I feel exhausted and I’m cramming things, I’ll just stop doing it because I know it won’t help me,” Marsh said. “I know what my limits are and if I feel like I’m pushing that limit, or if I feel like I would rather take a relaxing shower, then I’ll do that.”