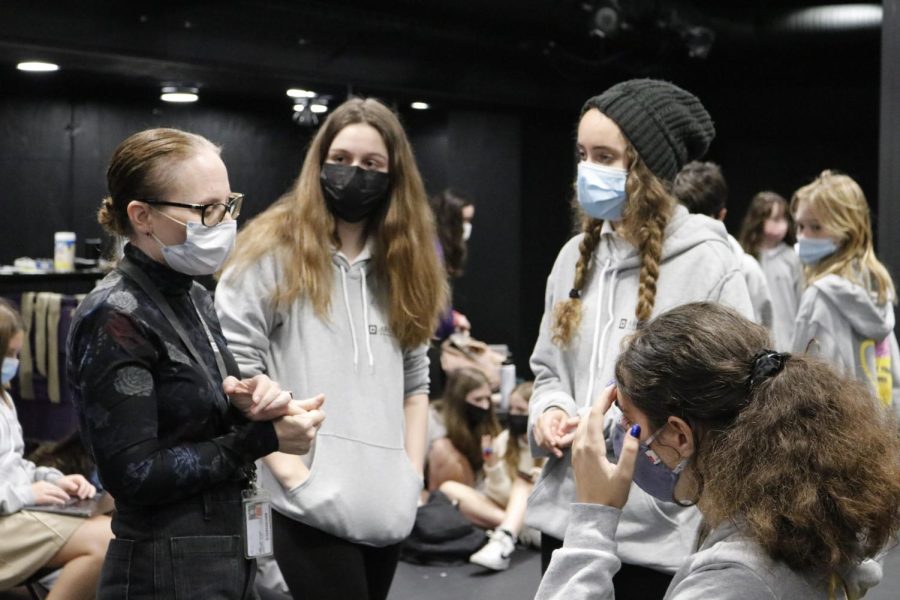 Co-directors Azel Alkadiri ('23) and Grace Whitney ('25) strategize with Tracy Poverstein on opening night of "Bright. Young. Things." The cast was running through rehearsals in the hours before the show.

The middle school ensemble welcomed the Archer community into the amphitheater to watch “Bright. Young. Things.” on Thursday, Dec. 8. The play tells the story of a game show where six of the smartest girls in the country go head-to-head, competing in academic challenges for the title of “America’s Brainiest Child.” The production was brought to life with the guidance of co-directors Azel Alkadiri (’23) and Grace Whitney (’25).

“With such a large double cast, they have been invaluable during the process,” theatre teacher and play director Tracy Poverstein said. “They would help groups of students rehearse while I was working with other groups. They were also able to help students create characters, give notes or feedback to the cast and push them along to achieve their goals. I would also ask their opinion on certain creative choices to see what they thought because I value their insight.”

Alkadiri and Whitney contributed to assigning cast members to their roles, and as a result, created one of the largest middle school casts Archer has ever had. The directors made the decision to double cast every role to include a larger amount of middle school students. After auditions, the assistant directors and Poverstein made two separate cast lists that were later compared to ultimately make the final decision.

“Ms. Pov said something that stuck with me — she said, ‘We’ve done something right when we all agree on people. That’s how you know that person is meant for the character,'” Alkadiri said. “We definitely had a lot of parallels and a few differences, which was interesting to see her perspective and compare. In the end, it really worked out, and so did our vision.”

Whitney and Alkadiri both applied for assistant directors prior to the start of rehearsals and were chosen by Poverstein. They had never met before, although both have participated in Archer productions in the past. For the past three months, they had been personally working with the middle school students, discussing ways to improve their characters, and providing tools to help improve their comfort levels while moving, staging and positioning.

“It’s been an honor. We definitely have a connection. There’s no way you can’t become friends with the people you’re doing this with, especially middle schoolers,” Alkadiri said. “Some days — I’m not going to lie — some days are tough, and then we have one of those moments where me and Grace just look over at each other and we know.”

Whitney is the youngest assistant director in Archer’s history. She has acted in Archer productions in the years past and is well-versed in the performing arts.

“Grace is probably so tired of hearing this but there is nothing ‘freshman’ about her,” Alkadiri said. “She’s wise beyond her years, and she’s made an excellent duo for me. It’s really deep, and we’ve had a great time.”

Alkadiri was chosen by Poverstein because of her past experiences in Archer productions as well as her acting skills. She is also a member of Archer’s advanced elective theatre troupe, the Drama Queens.

“I was first very intimidated by Azel,” Whitney said. “She’s so on top of it, her being a Drama Queen and everything, but in reality, she’s the most intelligent, articulate person. She’s so good at pinpointing where something might be going wrong, and she can phrase it in a way that the girls immediately get it. That’s a really big trait of hers, and I admire it so much. I’ve learned a lot from working with her.”

Being in a director’s role has given both Alkadiri and Whitney life-long professional skills, as they experience another angle of the production process. The two actresses were able to learn techniques to improve their own performances, as well as how to collaborate effectively with their fellow cast mates.

“As performers, we’re so used to the one side and so I haven’t seen the other one,” Alkadiri said. “But in the future, when we do the upper school play, I imagine it’ll really enrich our understanding of how to act and how to perform.”

The directors have bonded with the cast over the past three months, making important memories along the way. Whitney hopes to continue guiding them through the next few shows and supporting their growth in acting.

“As upper schoolers, we’re going to be able to work with them the next few years, which is really exciting,” Whitney said. “To watch them develop as actors, and whether or not they want to continue on this path.”