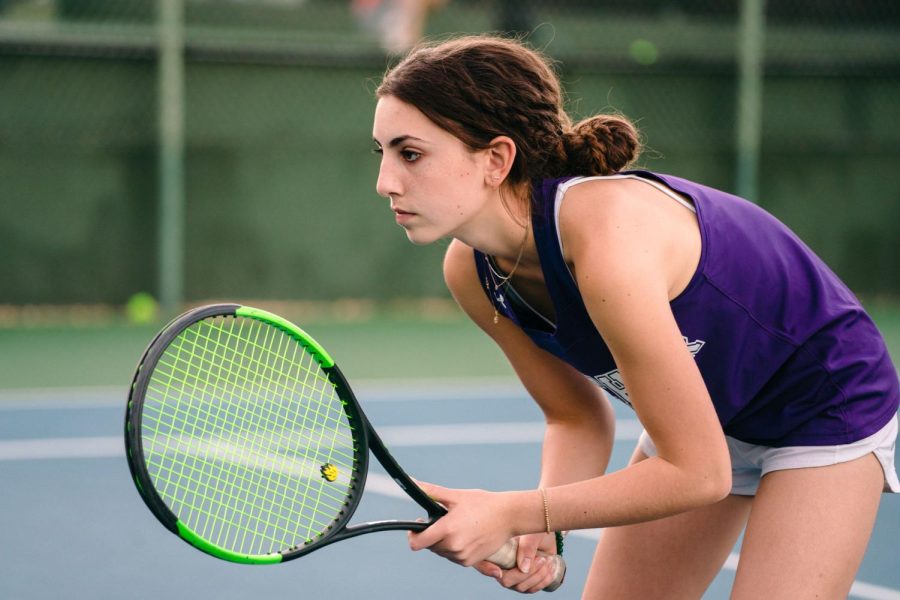 Senior and team captain Naya Ben-Meir crouches in ready position waiting for her opponent to serve. Varsity tennis made Archer history this season, as their CIF run marks the longest a varsity tennis team has ever made it in CIF. "I also think it was special because we weren't able to go [to CIF] last season and me and Lily both qualified to play together there, but we never got to go," Ben-Meir said. "I think that's why it was so special to be able to represent Archer there and actually get to compete and have some fun."

By Vaughan Anoa'i, Editor in Chief

This past season marks the farthest that a varsity tennis team has ever progressed in CIF competition in Archer history. After moving up to Division 2 and having an undefeated league record of 18-0, the tennis squad geared up to compete in the CIF quarterfinals. Archer was the only school to have been sent to CIF from the Liberty League, due to their undefeated league record.

While at CIF, the following players represented Archer: senior Lily Miro, senior Naya Ben-Meir, sophomore Audrey Chang, junior Sydney Frank, senior Destiny Morado and sophomore Alex Martin. Miro, Ben-Meir and Morado served as the team captains for the 2021-2022 season. As the athletes and their coach reflected on the entirety of this season, mutual feelings of gratitude and pride emerged while reminiscing on the past four months.

Paula Feigenbaum is the head coach of varsity tennis. She said this year’s team was the epitome of a “dream team,” as each singles and doubles qualification for CIF made school history.

“This has been a dream team that I’ve envisioned from a few years back, and they actually made school history this year, qualifying two singles teams and two doubles teams for the individual CIF,” Feigenbaum said. “That’s never happened in Archer tennis history before.”

As a four-year veteran, Ben-Meir has qualified for the number one doubles team in the Liberty League and individual CIF all four years.In the first round, Ben-Meir beat Archer’s across the street rival, Brentwood School, and immediately knocked them out of contention. Although she lost in the second round, Ben-Meir said that it was special to have made it that far while representing Archer.

“I think it was special that we were able to get far especially because Archer is considered the underdog in tennis,” Ben-Meir said. We really made it far in the past few years — It is [the season] a symbol for that and a good way to end off my career.”

Frank said how impressive the growth made over the past three years is, as the team was first in Division 6 when she first entered the program as a freshman. Next year, when Frank is a senior, the team will compete in Division 2.

“It is so great to see how far we’ve come. We started literally in Division 6, and now we are all the way up to Division 2, which I think is really impressive,” Frank said. “It shows our team as a whole and how we became such a tight-knit family. It just means so much to me to see our success because it shows all of our love and dedication to the team.”

In addition to making history within CIF, Archer made history in the Liberty League, too, as every single player on the team played in the culminating Liberty League tournament. This exhibition takes all of the top players in the league and gives them the forum to participate in the tournament, later qualifying those same individuals for CIF. Never before has every single player on the team qualified for this opportunity.

As the season progressed and competition heightened, Miro said she is proud of her personal improvement, and also spoke to the sacrifice of having to walk across the street everyday for practice.

“I’m most proud of my improvement because my playing at the net — I never was really great at that and it has always been something I’ve struggled with. But I think by playing doubles, I’ve had to get really good at that, and I’ve been able to move more on my feet,” Miro said. “We have to walk to Barrington [Park] every day and so still making it that far [in CIF] — even farther than Brentwood — it’s a really big deal.”

Not only does Feigenbaum coach the high school players at Archer, but she also works with the girls all throughout middle school, first starting in sixth grade. Feigenbaum said how the transition from eighth grade to high school is seamless, as the program takes on virtually the same format with some subtle differences.

“That’s the beauty of the program that I personally get to coach all the girls,” Feigenbaum said. “Some of the other coaches only coach high school, but I have the pleasure of coaching these girls since they were in sixth grade until they graduate high school, which is amazing. I get to see them develop not only as a tennis player, but really as individuals and role models for the team.”

Throughout her time on the team, Miro said how important it was to support her teammates by watching their matches and constantly cheering them on.

“I think there’s a stigma surrounding tennis or like a preconceived notion that it’s a very individual sport. But I think at Archer, they do a good job of making it a team sport,” Miro said. “Part of that is making sure you watch your teammates play — whether you’re playing doubles, and they’re singles, just go to the singles courts and watch them play and cheer them on.”

Looking to the future of Archer tennis, Ben-Meir said she is proud of her teammates and herself for moving up divisions. Although she is graduating, she said she is happy to have contributed to the growth of this program.

“Next year they’re going to Division 2, which is a huge accomplishment,” Ben-Meir said. “I’m just happy that they’re going even though I won’t be able to experience it … I’m really happy that I was able to contribute to that.”