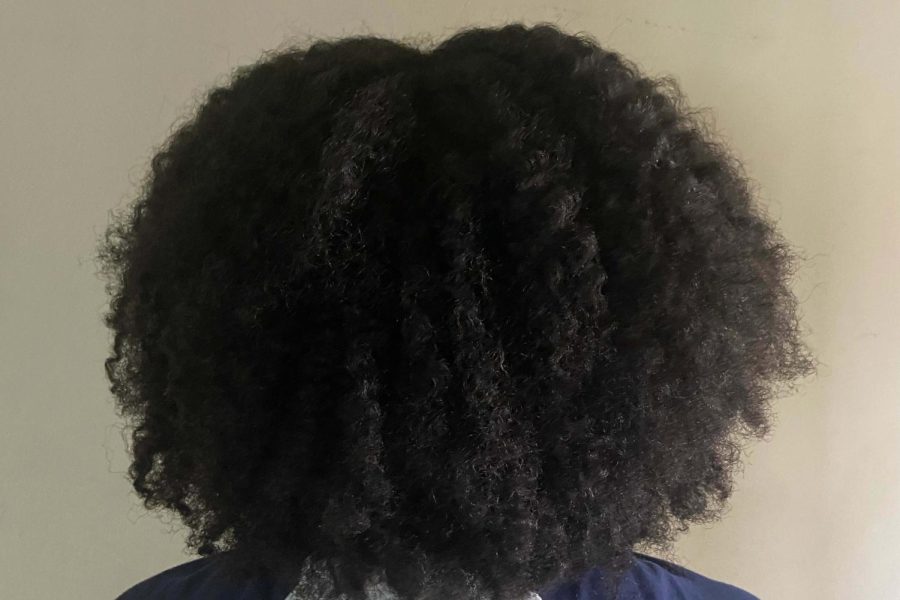 Junior Cadence Callahan shows the back of her curly hair. "I love my curls because they’re beautiful," Callahan said. "My hair defines me and is so important to me because there was once a time where Black people were ridiculed for their hair, and wearing my hair in its natural state is a rejection of Eurocentric beauty standards."

With just an iPhone and her own vision, junior Cadence Callahan created a film entitled “Hair Care,” which won “Best High Impact Film” at the MLK Unfinished Work Film Festival. Callahan recorded the short documentary at the Youth Media Academy last summer and said she was excited to create a meaningful film about her hair care journey.

The film is a brief poetic documentary about Callahan’s relationship with her natural hair and the connection with her grandmother that it fosters. Callahan said she devoted a lot of time and effort into creating the film, and said she felt happy with the end result and opportunity to share it with others.

“I had written a poem and played it over some of the clips that I filmed,” Callahan said. “The film was about my relationship with my natural hair and also the relationship that I have with grandmother — she did my hair, and she still does, and I wanted to honor her with this film.”

Callahan’s participation in the Youth Film Academy began June 14, 2021, and lasted until July 9, 2021. Callahan said she enjoyed her stay at the academy because her instructor, Marina Perez, taught her the tactics behind how to make an impactful film for others to view. Callahan said Perez has worked with talented artists such as Kali Uchis and Maluma in the past, and the opportunity to work with Perez opened her eyes to how documentaries are made.

“It was cool to have someone with that type of experience help guide and teach me about films,” Callahan said. “She gave us homework to watch documentaries and report back to her on what our opinions were towards each of the films.”

During the academy, Callahan had the opportunity work alongside one of her friends, junior Chloe Terani. Terani said she also enjoyed the program and felt grateful to be a part of something so meaningful to herself and others.

“Everyone there was supportive and encouraging towards everyone’s projects,” Terani said. “The instructors were also really supportive during the process, which made it fun as well.”

Terani said she saw Callahan in action when she was working on her piece and could tell how much the film meant to her. Terani said it was fantastic to see all of her Callahan’s hard work pay off in the end.

“I was proud because she deserves it, and I know how hard she worked on it,” Terani said. “I remember when she first started working on it — and the whole film, in general, was just amazing to see come together.”

Callahan said that her target audience was young Black women and girls, particularly those who had a close relationship with their grandmothers. She wanted to show them that their natural hair is an important part of their identity and who they are as people.

“I want them to be able to relate to my story,” Callahan said. “I wanted to make my grandmother proud because I have a close bond with her and I feel like this film really captured that aspect.”

Callahan said having the opportunity to direct her documentary while also having constant support from friends and family was an experience she will never forget.

“My friends said my film was so good, and they didn’t understand why I was embarrassed to show them,” Callahan said. “They were hyping me up, and it felt really good.”

Callahan said she had to approach people and ask for their permission to be filmed in a beauty supply store, which required her to ask each individual to sign a release form.

“I’m kind of a nervous and shy person, and for me, it was working up the courage to go up and talk to them,” Callahan said. “However, after I did that, I realized that my strength developed amazingly into my film, and that is what made it special and unique to me.”

When making a film, Callahan said she encourages others not to be scared to shoot random clips of things they enjoy. She said these random clips can later be transformed into something unique, taking one’s film to areas you had never imagined previously.

“I had never done a film before and I was nervous that it wasn’t going to turn out good or it was going to look sloppy,” Callahan said. “It turned out way better than I had expected and it made me happy to be able to try different things and get out of my comfort zone.”

To watch the award-winning film “Hair Care,” see the featured video below which Callahan granted permission for The Oracle to publish.