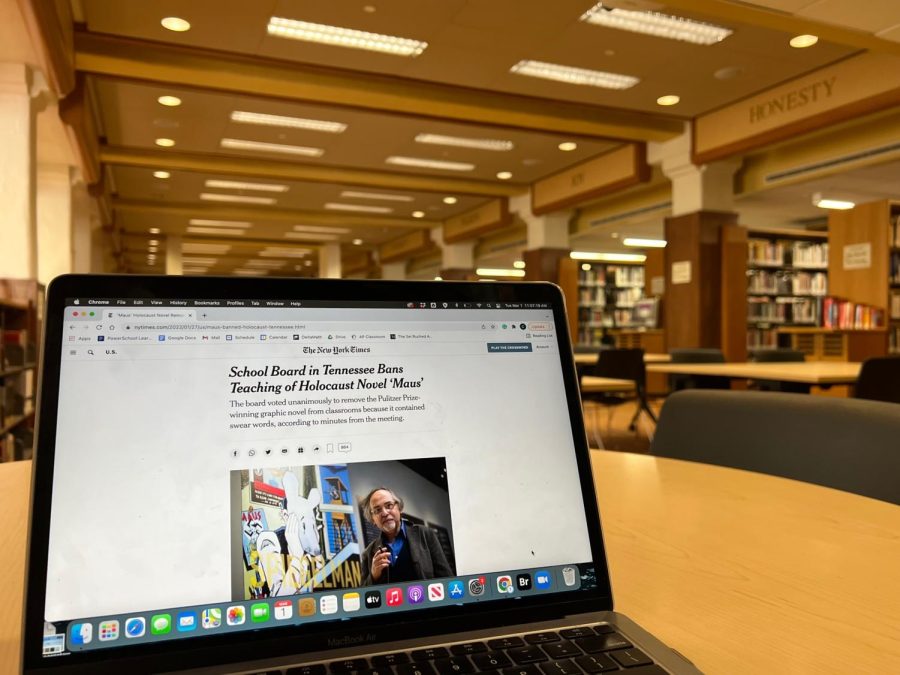 An article about book-banning describes efforts to censor literature. Libraries and schools have been forced to ban books that local boards disapprove of.

A book banning pandemic has swept from a Wyoming prosecutor’s office, which discussed banning books “Sex Is a Funny Word” and “This Book Is Gay,” to the Oklahoma state senate, where a bill was introduced to ban books that mentioned sexual activity, sexual identity or gender identity. The Oklahoma Republican Party filed a bill to allow students to sue schools for $10,000 a day for banned books that aren’t removed. In Texas, a Republican representative labeled 800 books on a watch list that focused on LGBTQIA+ rights and race. Most recently in Tennessee, the McMinn County schoolboard banned Pulitzer Prize-winning graphic memoir, “Maus.” The vote was 10-0.

Maus is a nonfiction book by Art Spiegelman about his father’s experiences as a Holocaust survivor and Jew in Poland. We are invited to the dinner table of Artie, the child of Vladek Spiegelman, who relays his experiences at Auschwitz and under the Nazi regime to his son.

Common Sense Media describes that “this graphic memoir is a sterling example of a book that upended all expectations about what comics could accomplish.”

Michael Canva writes for the Washington Post that Maus has remained “​the greatest graphic novel ever written 30 years” after it was published. This novel tells the truth about the Holocaust; it is not sugar-coated, it is not censored and it should not be.

My father’s mother — my Farmor in Danish — grew up in Nazi-occupied Copenhagen, and her father was a leader in the Danish resistance against the regime. He was an assassin that shot and killed Nazis.

Growing up, my grandmother would speak at my school about her experiences as a child and her father’s courage. She knew, in the face of genocide, there is no way to sit by and be impartial, uneducated or inactive. She was only 10 years old when the war ended but vividly remembers the Nazi boots clunking in the streets at night. She remembers her Christian family marching in the streets wearing the Star of David alongside the Danish King. She remembers.

The book was banned in an eighth grade classroom. Eighth graders are 13 years old. The truth must never be censored.

According to the meeting minutes, McMinn County schoolboard member Tony Allman said: “We don’t need to enable or somewhat promote this stuff. It shows people hanging, it shows them killing kids, why does the educational system promote this kind of stuff? It is not wise or healthy,” Allman said at the Tennessee school board meeting about whether to ban the book “Maus.”

If children as young as your child experienced this fate, your child deserves to learn about it. They deserve to experience whatever discomfort, anger, sadness or pain comes with it. You cannot rewrite history because it is challenging to speak about.

Chloe Fidler authored an opinion article in 2020 about the importance of proper education as a tool to counter antisemitism. She wrote that Holocaust education “is a key factor in understanding the evolution of antisemitism and how it is embedded in our society today.”

This is relevant, two years later as only three more states have mandated Holocaust education. More so, restrictions on access to books that accurately retell the horrors of the Holocaust have destroyed the possibility for systemic progress.

I spoke with the head of the Jewish Student Union at Archer, Lilly Dembo. She said that being aware, engaged and educated is paramount to counter the rise in antisemitism.

“Students also have to do their part in educating themselves,” Dembo said. “A lot of antisemitism is Holocaust denial. Students not being able to learn about this or this book being banned is definitely a problem. This is something that did happen.”

We have a responsibility to the next generation of children to share the accurate stories of the Holocaust. We need to share the stories of those we lost. We need to respond to actions to ban history with anger. Education is a constant effort, as global citizens, we need to learn about the past so we can respond to current and future situations. The Holocaust Remembrance Alliance has great resources, as does The National WWII Museum, the Facing History & Ourselves organization and The United States Holocaust Memorial Museum.

Children, and some of these adults, need to learn they cannot be neutral in situations of grave injustice.