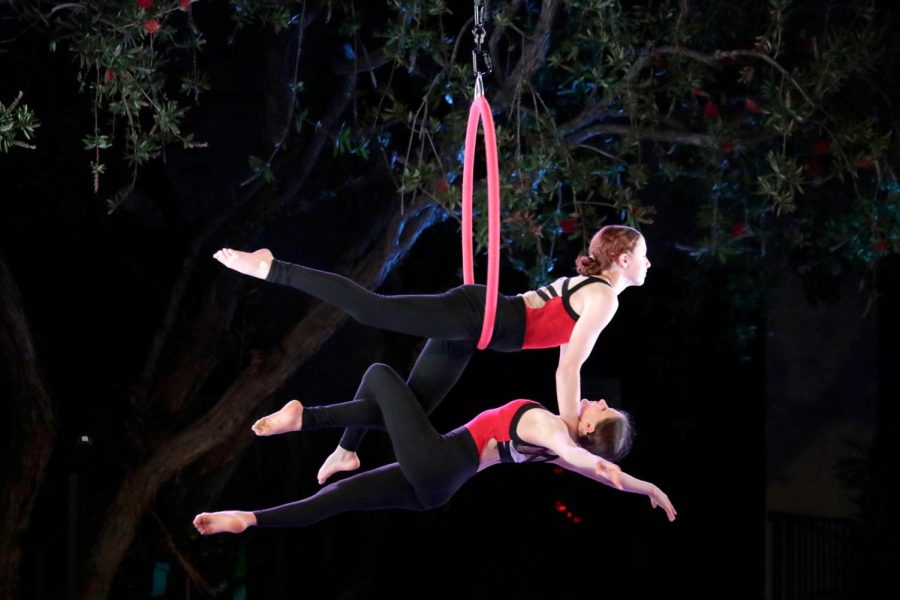 After a year of online performances, dancers from sixth to 12th grade returned to perform in-person at the Night of Dance show. The performance was located in the Eastern Star Courtyard Feb. 22, 23 and 24 at 7:30 p.m. The theme for this year’s Night of Dance was “Transformation,” which highlighted the large amount of change everyone has gone through over the past two years.

In previous years, Night of Dance was held at American Jewish University, and during the 2019-2020 school year, the show was performed at The Eli and Edythe Broad Stage. When COVID-19 surged in December of 2021, the show was relocated to the school’s courtyard due to limited venue options with COVID restrictions. Although the courtyard mitigated COVID-19 concerns, cold weather caused new challenges.

The show provided seats and tickets for a maximum of 250 people, and attendees were required to present proof of vaccination to attend. For those who could not attend the sold-out shows, the performance on Thursday, Feb. 24, was live streamed via a purchase link from Business Office Associate Beth Downing.

Before Night of Dance officially commenced, the dancers held a faculty show Friday, Feb. 18, and performed previews for the student body the week of Feb. 21 to Feb. 25.

Dance Troupe Director Andrea Locke said the planning for Night of Dance had been in the works since summer, and there were many discussions with the administration surrounding the location for the show.

“We did not want to have another virtual year. We wanted everybody to be able to dance together because dance is about the energy that’s created from bodies and minds and souls to give a message or express themselves,” Locke said. “I was very happy administration allowed us to pursue putting this up because they didn’t have to. The reason we ended up here is because we could not get a venue that would be guaranteed because COVID-19 was really prominent in November.”

As the COVID-19 regulations were changing, Night of Dance had to adjust. For example, Night of Dance was performed with no masks after Head of School Elizabeth English announced wearing a mask outside was not required as of Feb. 16. In addition, the administration allowed more people to attend the show as COVID-19 cases declined. Locke said the show was a step of courage because of the various obstacles that initially stood in the way.

“We didn’t know what was going to work — it was really a leap of faith and trust,” Locke said. “I think it speaks to the kind of spirit and character Archer develops in the young women that are here, because when you hit an obstacle or limitation, it’s really about transforming the obstacle from inside.”

“I’ve choreographed before for people in my grade so it was very different choreographing for 10th graders. I was nervous because I didn’t want them to hate my choreography, but I’m really glad it turned out good and they enjoyed the choreo,” Cadenas said. “They all worked hard throughout the whole process. It was such a great and fun experience to teach and have great laughs with them in class.”

Stage manager Erin Mamalakis (’22) had many concerns about the stage being located in the courtyard.

“Because the stage was off ground, it means the flow of traffic had to be particularly specific. Before, we had people coming from both sides of three sets of wings in previous venues,” Mamalakis said. “Because we had a set of stairs, you either exited on one side while the other half exited on another because otherwise we’d have someone fall and that was a problem. Also, the weather was going [to be] a problem if it gets cold and misty because dancers could’ve slipped or stumbled with a slightly wet stage.”

As Mamalakis predicted, the weather caused issues. Throughout tech week and the entire week of shows, the weather ranged from 39˚F to 62˚F at night affecting many dancers. While audience members could bring additional layers for warmth, the dancers had to perform in their thin costumes, impeding their ability to perform.

“It’s been really cold lately, and for one of my costumes, I’m wearing a dress,” junior Gizelle Moran said. “It’s been a very difficult experience for me and other girls in my dance because of all the wind that is blowing around me, especially with the thin and short dress [which] makes it even more difficult to handle the cold.”

Sixth grader Josephine Hatton said the aerial dance was composed of eighth graders, who couldn’t perform due to the high winds on Wednesday’s show, noting an additional drawback of the cold weather.

“Their muscles weren’t warm enough which could’ve caused a few injuries — dancers who were barefoot, normally it’s easier for them to dance,” Hatton said. “Since the stage was slippery, especially when it was wet due to the mist in the air, sometimes it made it hard to dance because it was more slippery barefoot which could’ve caused them to fall which had already happened during tech week.”

Despite the challenges, eighth grader Josie White said she was glad to perform with her peers in-person again now that it is at Archer.

“We all definitely got to connect more in the pieces that we did. There was more emotion we got to show as well because once you’re together, you bounced off each other’s emotions and attitude,” White said. “Performing at Archer was really comfortable because I don’t think any of us didn’t feel nervous because Archer is our home.”

Locke said she hoped everyone was able to see the hard work of the dancers, crew and facilities for making the show possible.

“I looked forward to everybody feeling great about performing in the audience, feeling really great and proud about Archer,” Locke said. “I wanted to show everyone, this is what we’re about and we did it.”