Goals and growth: Varsity soccer wraps season in second round of CIF 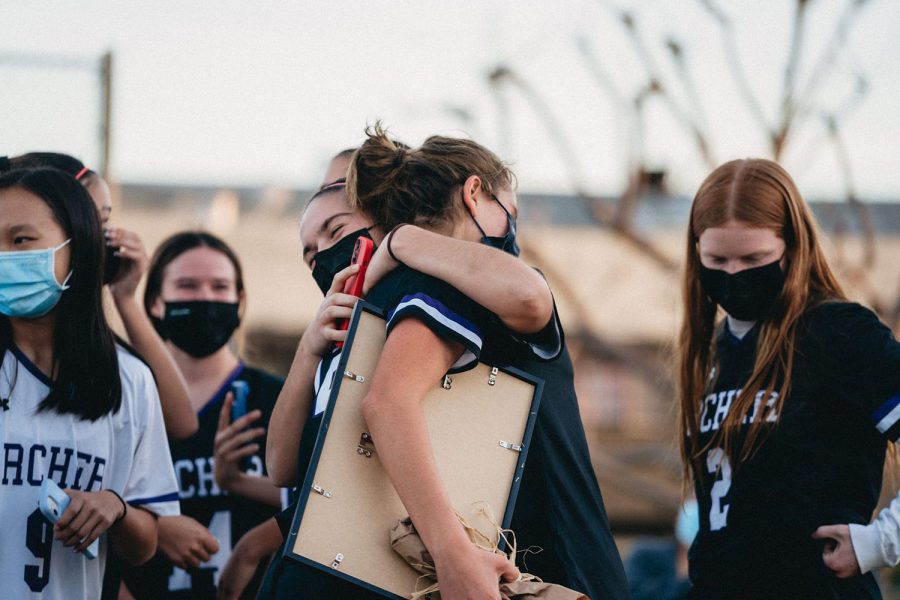 Varsity soccer players Rose Chuck ('23) and Gabby Wolf ('22) hug each other during the Senior Night celebration after their last game on Feb. 15. "Us building connections off the field has made us play better on the field," Chuck said.

After two months, 11 overall wins and seven league wins, varsity soccer has wrapped their 2022 season. The team made it through to the second round of CIF playoffs where they lost 2-1 against San Gorgonio High School.

Despite the loss, Director of Athletics and Head Coach Kim Smith said the season was incredibly rewarding. Smith said that she is proud of the team’s work ethic and continuous perseverance.

“I am most proud of everyone showing up,” Smith said. “Showing up is the most important thing because everything else follows … Not only did they show up, but they gave their best at practices and at games. So I’m proud of that.”

Sophomore Sabrina Walker has been on varsity soccer since her freshman year. Like Smith, Walker said she was proud of her team and how well they played over the course of the season.

“How could I not be proud?” Walker said. “We played really well this year … I’ve never been disappointed with this team.”

Throughout the season, junior Rose Chuck said the team really grew together and many connections were formed across grade levels.

“Throughout the season, I’ve really seen the team come together,” Chuck said. “I love meeting people. Meeting seniors, meeting sophomores, meeting freshmen and getting to build connections with them that I don’t normally because they’re not in any of my classes.”

Because of COVID-19, the players lost most of their season last year. Chuck said that although it was challenging for players to connect at first, the team was able to overcome those challenges.

“Last year we kind of had a season, but it was weird,” Chuck said. “A lot of us weren’t able to go to practice. This year, I could tell a lot of people weren’t connecting that much at first … I’ve definitely seen the energy really shift over the season. People are way more excited to be there.”

Smith said she is glad that the players were able to experience growth on the team and accomplish their goals. She hopes they are able to take the skills they learned this season and apply them to other aspects of their lives.

“My goal was for them to be more confident, feel more connected, be more willing to take risks and to accept challenges,” Smith said, “[And] to take the experiences they had with leadership with the team and apply it in other areas of their lives.”

As Smith hoped, players also experienced personal growth this season. Walker said being on the team has forced her to venture outside of her comfort zone.

“I’ve also noticed [growth] socially,” Walker said. “Being on a soccer team, like the one at Archer, forces me to get out of my shell and talk to people because you have to create connections with other people on the field. You’re a team, it’s not a solitary sport.”

As the team grew more comfortable with each other, Walker said they were all able to collectively improve as players.

“I know I don’t play well when I’m not comfortable with my teammates,” Walker said. “But, when you have a whole system of people behind you to support you, even when you might not be having the best day, [it] forces you to be better.”