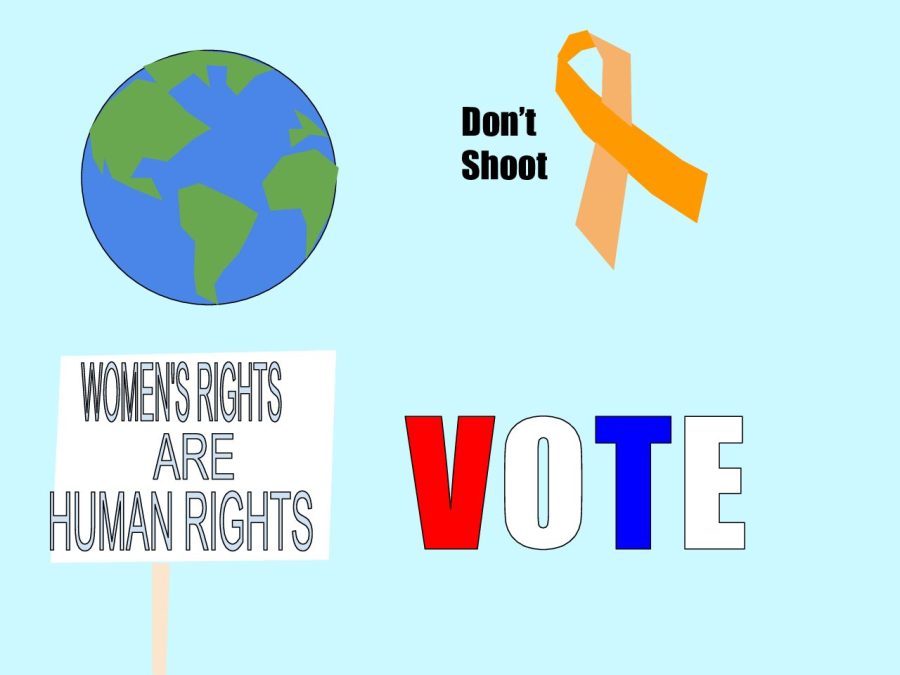 This graphic illustrates some of the issues that young people around the country are engaged with. In recent years, youth interest and activism in these issues has spiked, specifically with issues such as climate change, women’s rights, gun violence and racism.

‘Young people are less institutionally minded’: How youth participation in politics has increased

Women’s rights are human rights. There is no Planet B. We say gay. Black Lives Matter. Never Again. My body, my choice. Many people have heard these common phrases as Americans have taken to the streets to fight for civil rights and social justice. Young people are at the forefront of these movements, such as Greta Thunberg, X González, Sophie Cruz and David Hogg. Through Twitter, TikTok, Instagram, protests and more, young people are becoming more politically active to fight for change.

In April 2021, the Harvard Kennedy School’s Institute of Politics conducted a poll of 18 to 29 year old individuals across the United States. The survey results showed that nearly a year after President Obama’s election, 24% of young Americans considered themselves politically active. According to the most recent poll, 36% of young Americans consider themselves politically active, with Black people being the most active at 41%.

In another survey conducted by Hamilton College of individuals ages 18 to 24, 88% were registered to vote and 29% said that they have thought about a career in politics. Ninety-five percent said that political issues have a major effect on how they would vote in elections and the most important issues to them were education, Social Security and abortion.

Ari Matusiak is the co-founder of Young Invincibles, a non-profit organization that advocates for policy issues for 18 to 29 year old individuals. He is also the CEO of Rewiring America and co-founder and managing partner of Purpose Venture Group, a firm that consults for pro-environmental businesses. He was formerly the Special Assistant to the President and Director of Private Sector Engagement under President Barack Obama.

“I’ve been spending a lot of time working on climate these days. What we’re seeing from teens is, frankly, much more recognition of the urgency of the moment in time and how important it is that we get our politics working right,” Matusiak said. “If you look at the climate crisis — for teens, for young adults — they are going to experience a very different planet in their lifetime if we don’t make real progress on addressing the climate crisis. I think that causes a level of urgency that maybe older folks don’t have because they haven’t had to face that reality in their own lifetimes.”

In Harvard University’s poll, alumni and Director of the Kennedy School Institute of Politics Mark Gearan shared a similar perspective. He told the Institute that millennials and Generation Z’s values and activism provide a sense of hope and urgency that the nation needs to acknowledge the crucial issues that impact them.

“The teenagers that I interact with are really passionate about climate change … [and] human rights issues when it comes to race, gender and sexuality,” history teacher and Service Learning Coordinator Margaret Shirk said. “They’re really focused on issues that impact them and their peers and the people that they love in their life.”

To hear more about the issues that Archer students care about, listen to the audio clip below.

In a Teen Vogue article, “The History of Student Activism in the United States,” Dawson Barrett writes that student and youth activism began to spark during the counterculture movement of the 1960s and 1970s. Similarly, Matusiak believes the social movements led by young people have been successful because of their mature ideas and persistent calls to action.

“Any social movement that’s had any impact in the U.S. and around the world has been really conceived of and led by young people. Even when things feel like they are taking too long and not matching the urgency of the moment, we need young people [to] call on policymakers and decision makers to do more, to be better and that voice needs to be a consistent one,” Matusiak said. “It can’t just be one that shows up every once in a while because you only get and keep political power and influence if you show up and keep showing up.”

Paul Begala has been an Affiliated Professor of Public Policy at the Georgetown University McCourt School of Public Policy for 19 years. Begala is a frequent political commentator for CNN and also an author of six books. Prior to his time as a professor, Begala advised many campaigns, most notably President Bill Clinton’s presidential campaign in 1992, as a senior strategist. He went on to become a counselor to President Clinton and coordinated policy and media. Additionally, he played a pivotal role in the Obama-Biden re-election campaign.

Begala said he believes there is a generational difference between older individuals and younger Americans.

“My own experience, and there’s some research on this, is that young people are less institutionally minded, less institutionalistic. That is to say, ‘I’m a Democrat. I signed up. I wear that blue jersey,'” Begala said. “I find young people tend to be more progressive than conservative. But they don’t sit around waiting for the Democratic Party or the Republican Party to tell them what to think. They’re much more issue specific and much more driven by causes, and those causes — at least in my experience — have especially revolved around racial justice and the environment.”

Shirk said she also saw a generational difference in the way that young people are going about taking action, calling for change and raising awareness for the issues they care about, especially with the recent popularity of the media.

In the Teen Vogue article, Assistant Professor of US History at Del Mar College Dawson Barrett writes about several instances where students were at the forefront of change in their schools. These instances include when groups of students established Gay-Straight Alliance clubs across the country in the 1980s. He also mentioned many student-led walkouts against wars, gun violence, and protests against Trump’s election.

“Though young people through the ages have routinely been dismissed because of their age, they’ve often been decades ahead of older generations in their thinking,” Barrett wrote.

“My friend, Bob Casey, is a senator from Pennsylvania,” Begala said. “[His daughters] really supported Obama. He was so impressed with the arguments they made, the brains and the passion that they brought to the debate, that it shifted him … He called Hillary and said, ‘I’m going to go out and endorse Barack.’ But I said, ‘Why?’ and he said, ‘Because of my girls. They’re just so passionate. They’re so intelligent, and I listened to them, and I thought, they’re right.'”

At times, the influence of political values can be reversed and reciprocated. As stated in the Khan Academy article “Influence of Political Events on Ideology,” family, friends and demographic factors play a large role in political socialization, as do generational and lifecycle effects.”

“I see that a lot of times really active students and politically engaged students are coming from households that also are politically engaged because they’re being trained and encouraged to talk about those complicated topics,” Shirk said. “Oftentimes, you can point back to the family, probably friend groups too — certain friend groups will be a lot more interested and engaged with world news, and other groups, maybe not.”

To hear more about Begala’s perspective on the recent increase in political activism among young people, listen below.

“I hope we see more young people out in 2024 than we did in 2020, and my hope is that they don’t get frustrated with what they are witnessing in Washington today,” Matusiak said. “I hope they learned the lesson that participation really matters and that if what we want to see is a changed and more equitable politics going in, [we need] more people coming out.”

Begala and Matusiak said voting and continuing to call out people in leadership positions are very powerful tools for individuals to see the change that they would like to have happen.

“If voting wasn’t powerful, then they wouldn’t be trying to take it away from you. If voting didn’t make a difference, then people wouldn’t pass these voter suppression laws. They are scared of you,” Begala said. “I think there’s going to be a backlash to all of these voter suppression efforts. I think it’s going to take more creativity, more energy, more organizing. But, young people are especially talented at that. Some of it is also on my generation. We old guys have got to give you all something to vote for. We’ve got to come up with good candidates, interesting ideas, energetic appeals … we have to listen and give young people the kind of politics that they want — that would be empowering and ennobling.”