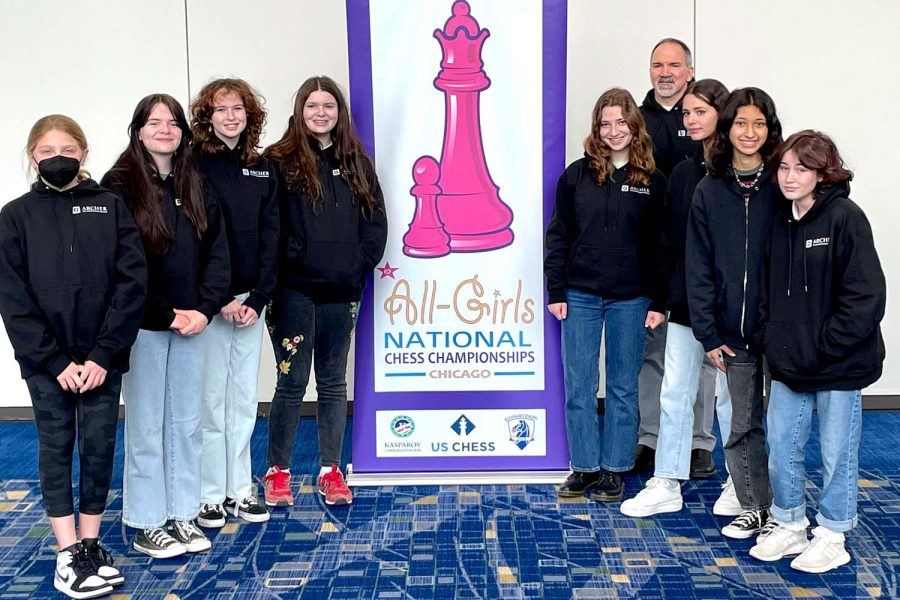 The chess team and chess coach Jay Stallings stand in front of a poster advertising the tournament before competing in their first rounds of matches. At the tournament, each player earned at least one point by winning a match for the Archer chess team.

After competing in online chess tournaments throughout this school year, members of the Chess Club traveled to Chicago to compete in the 2022 All-Girls National Championships, which aims to promote gender equality and inclusivity in chess.

The tournament is sponsored by the Kasparov Chess Foundation, Renaissance Knights Chess Foundation and the U.S. Chess Federation. Players arrived Thursday, April 21, and their first round of matches started Friday, April 22, followed by more rounds, games and smaller events during the weekend. Students in kindergarten through 18 years old could compete in different age divisions of the tournament.

Sophomore Liora Ginzburg started the Chess Club at Archer this year and said she is passionate about making chess more gender-inclusive.

“Women are disproportionately underrepresented in chess,” Ginzburg said. “Being able to come as an all-girls school with a team of almost nine people [is] really impressive … there are not that many women that play, so it’s meant to be a more uniting experience.”

Chess coach Jay Stallings started coaching chess at Archer this year, and has been a professional chess coach for over 25 years. He said he was excited about how much the team has grown in such a short amount of time and was looking forward to seeing them compete in the tournament.

“There’s something about competing that helps us to bring out everything that we’ve worked hard on, that brings out all of our qualities and pushes us to be our best,” Stallings said. “It was originally my goal to go to Nationals next year, but they have been such diligent improvers that when the spring semester started to roll around, I said, ‘I think they’re ready for Chicago.'”

Although students play individually, their final scores for their wins are combined in a team score. Each player receives one point for a win, no points for a loss and half a point for a tie.

“Everyone got at least a point, which is really impressive, especially since this was everyone’s first in-person tournament on the team and most people’s first real games with people aside from the club,” Ginzburg said. “There were a lot of challenges that everyone really overcame, and they really played their best. What I think matters more than the score [is] that everyone really took the time to think about their moves — it shows a lot of promise.”

Some players also had the chance to play chess-related games and connect through chess with students from other states. For example, Ginzburg partnered in a two-person variant of chess called Bughouse at the start of the tournament with a chess player from another state. Ginzburg and her partner won first place for Bughouse overall.

“I want the team to continue to grow in their chess abilities but also grow together, and, already, I think they’ve built some really great friendships,” Stallings said. “The opportunity to grow and experience this national event with girls from 49 other states that will be coming together and competing — it’s so exciting to see.”

Sophomore Guinevere Hesse said she enjoyed learning from all of her matches as well as having the opportunity to connect with other members of the chess team.

“Besides all the chess strategies I learned, I learned how much fun it was [to] be with the community and travel together and play chess together,” Hesse said. “It was a lot of fun getting to bond, and I never knew how much fun it would be to do this together.”

Each person played five or six matches throughout the rounds. Ginzburg said that their team room at the tournament had a very supportive atmosphere, and team members bonded while playing together.

“There was one thing that I thought was fun that we did every time someone came back from the round … when they came in, everyone would be applauding, win or lose — I thought that was a really sweet environment,” Ginzburg said. “I felt really supported by my team, and that was something that was new to me because I’d never been on a team — I loved it so much.”