Editorial: The immeasurable value of administrative support for climate activism 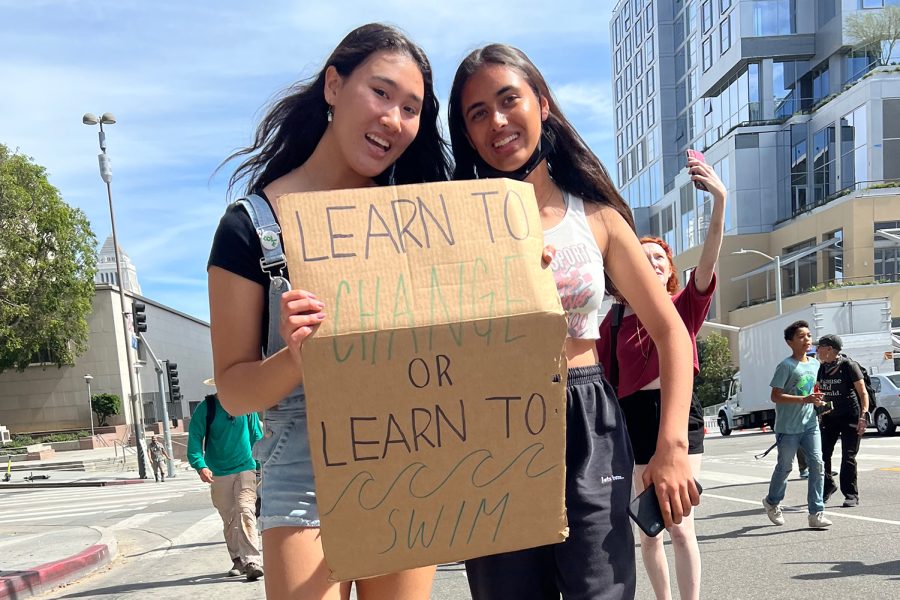 By 21-22 Oracle Editorial Board

“Can I have three volunteers?” the man with the megaphone asks the crowd. He stands on a platform beside a band at the Youth Climate Strike L0s Angeles. Leaping from their seats are three young girls in khaki skirts and purple polos. With beaming smiles and a crowd cheering them on, the girls lift up signs to accompany a performance of a song demanding climate justice.

These three participants are Archer students. And unlike Greta Thunberg, who had to strike from school each Friday to protest for climate action in 2018, the young activists were supported by their school administration.

As part of the first global climate strike of 2022, the Youth Climate Strike Los Angeles was held March 25. Participants listened to speeches and music followed by a march through the streets of Downtown from city hall.

Working with community climate activist Paola Hoffman, the Archer administration gave students an excused absence for attending the strike. While Archer didn’t provide transportation to downtown as they have in the past, students of any grade could be excused from classes to attend the strike. This support was indispensable in uplifting student voices and encouraging community participation of all ages.

An article by the American Council on Education noted how “research has shown that students engaged in activism reap educational benefits such as developing an inclination to continue their political participation well into mid-life and acquiring a greater sense of social responsibility and identity consciousness.”

At strikes, we, the youth, have the chance to foster civic virtue, engage with current issues and develop an understanding of how to work for change in a democratic society. And in an age of weather catastrophes and waning ecosystems, awareness and participation in climate activism is more important than ever.

Through granting students of all grades an excused absence, the administration enabled the development of these skills and an essential awareness of global issues. We could have attended the strike against school policy, but having the support of school leaders behind us made it clear that those who support a female future believe in us to create that future now.

Archer leaders have, once again, established the community value of student action. It is an essential foundation for fostering an environment where students can continue to find causes that are important for them to speak up about.

In 2019, Archer bused eighth through 12th grade students to the Global Climate Strike in Los Angeles and excused all absences for attending the strike. Although the pandemic halted climate strikes for the past two years, it is important that the administration renewed its support for climate change activism and participation.

As activists, leaders, contributors and Archer students, we will continue to be socially and politically engaged, searching for ways to better our communities and the larger world. We recognize the administration’s crucial role in doing so and value the support given to students to use their voices for change.