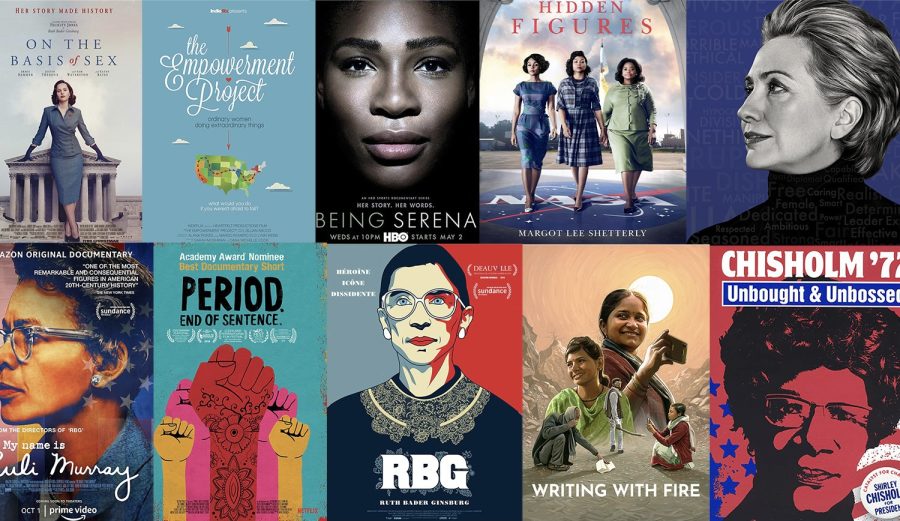 This graphic depicts posters for several documentaries and films that I chose, exploring various topics highlighting influential women. I hope you find inspiration from this selection of films and engaging content. Graphic illustration curated with promotional film, tv show and documentary images.

Since the leak of the Supreme Court draft to overturn Roe v. Wade and more than 108 restrictions on abortion in 2021 alone, women have been worried about the future of their health and lives. To bring hope during these uncertain times, I wanted to highlight a few female achievers with movies, documentaries and other films exploring their lives and accomplishments.

Hillary Clinton is known by many as the first lady and wife to former President Bill Clinton and for her run against former President Donald Trump in the 2016 election. In the wake of the 2020 election, Clinton released a documentary with almost 2,000 hours of unseen footage from her campaign.

“Hillary” is a four-part limited series where Clinton opens up about her life, career, presidential campaign, marriage and more. The series includes transparent interviews with relatives, colleagues and friends. Another important aspect of the series is that Clinton demanded a woman was the lead director, which ultimately went to film producer and director Nanette Burnstein.

“The Empowerment Project: Ordinary Women Doing Extraordinary Things” is another great example of female empowerment. The film not only centers on women, but the film crew was comprised of all women as well.

The crew traveled around the country highlighting 17 female leaders who are making positive changes around the world. The women featured in the documentary are leading in a variety of fields, such as an architect and an astronaut, and the film encourages young girls to fight for change.

Some might not know the name Pauli Murray, but after watching the documentary “My Name is Pauli Murray,” you will. Murray was a Black, queer, activist and civil rights pioneer. Among the numerous roles she obtained, Murray was an author, Episcopal priest and lawyer.

Similar to Martin Luther King Jr., Murray was a reverend and had a Doctorate of Juridical Science. She was a source of inspiration for late Justices Ruth Bader Ginsburg and Thurgood Marshall, and her idea that the 14th Amendment could help fight gender discrimination helped Ginsburg advance in her fight for gender equality.

“My Name Is Pauli Murray” explores Murray’s inspirational life and career from her start in North Carolina to her death in 1985.

This film is on this list for its inspirational storytelling. In a town outside of Delhi, India, a group of women combat the stigma of periods, learning how to make pads to sell around their town.

“Period. End of Sentence” is another motivational example of young people leading the fight for change around the world. The film won an Academy Award in 2019 for Best Documentary (Short Subject).

“If they don’t give you a seat at the table, bring a folding chair.” These were the wise words of glass-ceiling-smasher Shirley Chisholm. She was the first Black woman to be elected to the U.S. Congress and the first to run for president.

“Chisholm 72: Unbought and Unbossed” follows her presidential campaign in 1972 and examines the large amount of support she received during a time period of discrimination against women and Black people.

Although she did not win the presidential election, Chisholm paved a path for women and Black people to pursue their passions and to be fearless when fighting for change.

This list can’t be complete without including a film exploring the iconic Justice Ruth Bader Ginsburg, who was an essential part of the Supreme Court, a progressive feminist and trailblazer.

In “RBG,”  filmmakers examine Ginsburg’s life, career and the legacy she left in her fight for gender equality. The film depicts parts of Ginsburg’s life, from her childhood to being a Supreme Court Justice, including her banter with Justice Antonin Scalia.

The film features interviews with Gloria Steinem, Nina Totenberg and other people close to Ginsburg. The film was nominated for three Academy Awards and received an Oscar for Exceptional Merit in Documentary Filmmaking.

I hope this list has inspired you to learn more about these influential female leaders who are fighting for change, paving paths and getting into, as the late John Lewis said, “good trouble.”