By Cat Oriel and Nelly Rouzroch 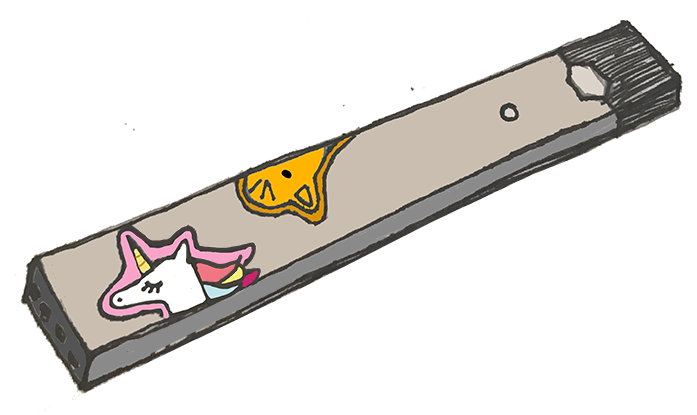 Artistic representation of Lexie’s Juul decorated with stickers. Those who do not know what a Juul looks like may mistake it for a flash drive or another everyday object. Illustration by Kisa Rozenbaoum ’18 and Cat Oriel ’18.

Lexie*, an Archer senior, pulls out a small black device that looks like a USB from her backpack. It is decorated with stickers. It is empty; there is no flavor pod inside.

But this device isn’t used for transporting computer data, it’s the latest smoking trend — a Juul.

On the Juul Vapor website, a Juul is marketed as a “genuine alternative to cigarettes” that was “designed with smokers in mind.” Users insert a flavored Juul pod into the top of the device, which come in flavors such as mango, butterscotch and cool mint.

According to the website, one Juul pod is equivalent to approximately one pack of cigarettes or 200 puffs. The device can be charged in about an hour. Like other nicotine products, it is illegal for anyone under age 21 to buy, own or use a Juul.

“I don’t remember the first time I did it,” Lexie said. “I basically told myself don’t buy one, but over the summer I bought one because it became so common.”

Even though Lexie keeps her Juul in her bag, she never brings it out at school. She doesn’t smoke at Archer, but she is aware of the vaping culture in public schools because of her outside of school friends.

“I think the culture around [vaping] is different at public schools than private institutions,” Lexie said. “Because of the popularity of the item, it’s become so desensitized. [Some public school students] will do it in front of their teachers and won’t get in trouble and won’t get caught — part of it is because it looks like a flash drive.”

However, the popularity of juuling is not only a concern for public schools but now for Archer and other independent schools too.

Dean of Students Jenn Babin spoke about the school’s concerns to upper schools after a Community Connections meeting. Archer also sent an email to the whole school and parents.

“In the independent school community, there has been a lot of information sharing about vaping devices and Juuls. We felt it was important to have one consistent message go out to our community about it,” Babin said. “I spoke with classes, and I went over the health risks and concerns around vaping devices and the lack of research. The effect of these devices are still very much in question. I also discussed how the uses of those devices relate to our handbook policy….We take it very seriously.” 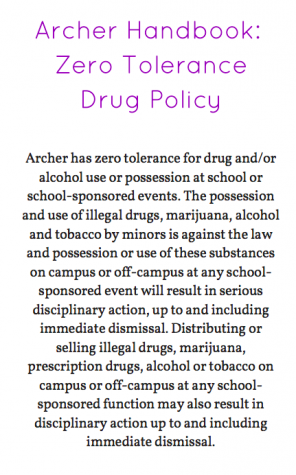 Babin felt the need to be proactive about educating students on Archer’s policies on smoking and vaping at school instead of waiting until after incidents occur.

“It’s illegal for anyone under the age of 21 to use or possess [Juuls] on or off campus… It does violate [the zero-tolerance drug policy], and if it were to come to light that someone was using it on campus, it would be treated very seriously,” Babin said. “The way our consequences work here on campus is that we have the Honor Council. If something like that did come up, it may go to the Honor Council to decide what those consequences would like look.”

Babin wanted to make sure that it was clear that the administration was primarily coming from a place of concern for student’s safety and health.

“There’s concern from parents and students, who are aware that this is something students are looking into, whether it be in their personal life outside of school,” Babin said. “That was the reason that we wanted to get ahead of the story and be proactive and educate the community, making it clear that that is not acceptable on campus and reiterating to students the potential health consequences and that we are concerned.”

Some teenagers Juul because they think it is cool and believe that it is less harmful than smoking or regular vaping, Lexie said. However, according to pulmonology specialist Maged Tanios, Juuls are not as safe as teens may believe.

“[Juuls are] not as safe as people think they are,” Tanios said. “Nicotine by itself can cause a lot of vascular disease, heart problems…and addiction. It can cause a lot of injury to the lungs usually, something like scarring in their lungs.”

One Juul pod is equivalent to a pack of cigarettes, but Tanios believes that teenagers think it is a healthier and safer alternative to smoking cigarettes because of the way the device is marketed.

“The marketing for it has been generally known as safe, and they put a lot of different flavors to make it taste good. Nobody knows if what they put in it is safe or not,” Tanios said. “In my opinion, one of the dangerous things about vaping is the misdirection of the vaping industry for the teens that it is safe. It started from the idea that cigarettes are bad and nicotine is bad, why don’t you wean yourself off smoking and start vaping.”

Lexie said she is aware of the negative health consequences that smoking can have on the body, but she makes the decision to do it anyway.

In my opinion, one of the dangerous things about vaping is the misdirection of the vaping industry for the teens that it is safe. It started from the idea that cigarettes are bad and nicotine is bad, why don’t you wean yourself off smoking and start vaping”

“I don’t really use mine that often because after a while it does make you sick, and it does have negative health impacts,” Lexie said.

However, if teenagers still want to use a Juul despite the health risk, she advised them to not do it at school.

“If you’re going to do it, do it at home. I think it’s a call for help if you are bringing it to school. But as a message to other students: Don’t do it at school,” Lexie said.

Babin believes that if a student knows their peers are violating Archer’s zero-tolerance drug policy, the best place to start would be peer to peer communication, coming from a place of care for friends in terms of their health and the potential consequences that they may face. However, if concerned students have tried speaking to friends, they have resources on campus like Peer Support or Guidance Counselor Patty Lancaster.

“We want to help support students and help support them to make good choices, and I think being a good friend can sometimes be difficult in that case,” Babin said. “But it would be good for students to hold each other accountable.”

*Name has been changed by the request of the source due to the nature of the subject.