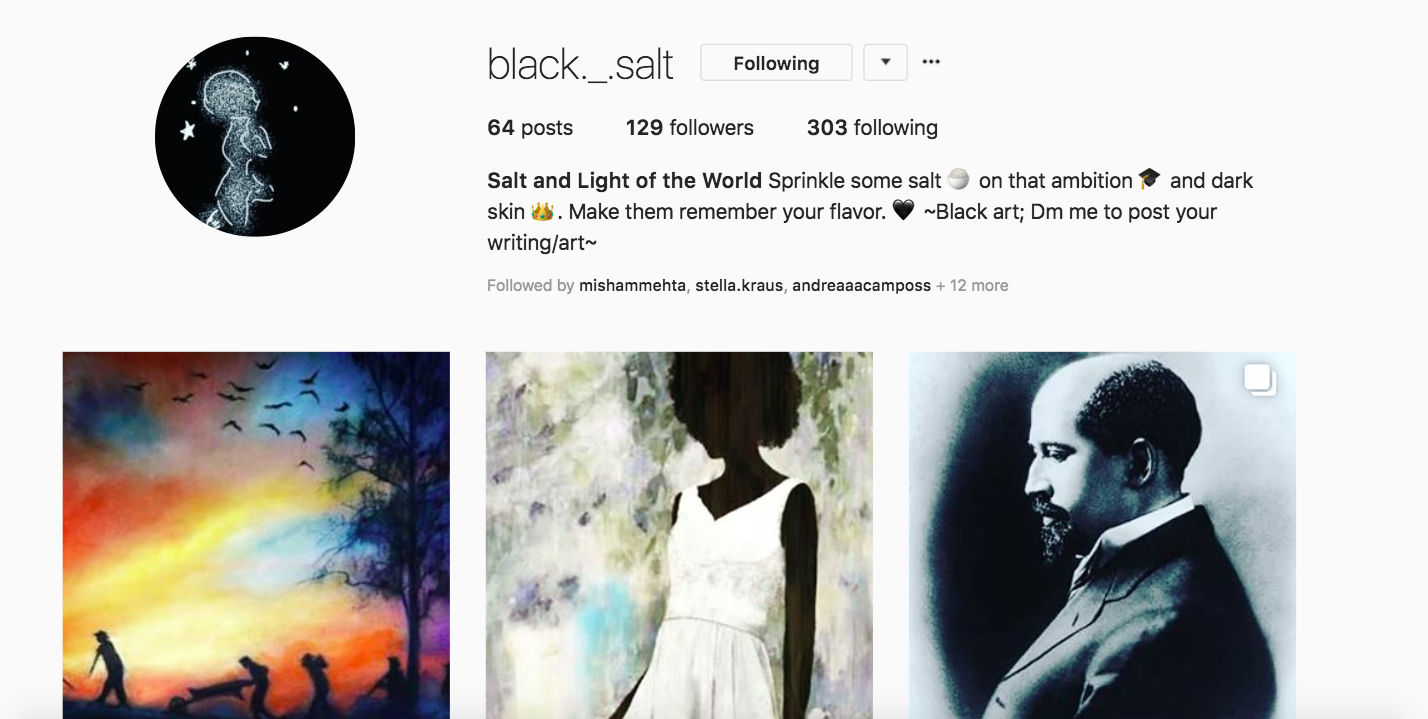 The Instagram page for Jones’s account, @black._.salt. The account features different works of art as well as quotes and poems, all centered around the creativity of people of color. Image source: Black Salt Instagram.

The Instagram page for Jones’s account, @black._.salt. The account features different works of art as well as quotes and poems, all centered around the creativity of people of color. Image source: Black Salt Instagram.

These are words from The Bible that inspire Lena Jones ’20 every day and influenced her to create a social media project called Black Salt.

“Black Salt is an ongoing project of mine that is dedicated to showcasing the beauty and the ingenuity of people of color, who create wonderful things for the good of all of humanity,” Jones said. “I created it to show our story, our way.”

Black Salt is run through Instagram, containing posts of everything from drawings and paintings to quotes and photographs.

Jones originally felt compelled to create this account last year in ninth grade for her Service Learning Proposal. For the ninth grade history course “Understanding the Contemporary World,” all freshman are expected to create and complete an individual project for community service. They choose a topic that interests them and do further research in order to determine an organization to volunteer at throughout high school that involves the students’ topics of interest.

Jones decided to delve into emotional and psychological unrest in the global African-American community.

“During my research, I learned about the aftereffects of slavery, segregation and things in those categories on the psyche of people of color. This program I’m trying to enact is a way to celebrate the beauty instead of the tragedy of the past and to help us move forward as a community,” Jones said.

Jones strives for race to be the central focus of Black Salt.

“I’m trying to create a way for Black Salt to represent all people of color, as well as allies, not just African-American people because that’s not the only story that needs to be told,” Jones said.

In addition to race, spirituality and religion are large components of the project.

Another goal for Jones throughout the duration of this initiative has been to propel a message of contentment. She wants her social media followers to understand the brutal past that people of color have experienced and how to make peace with it.

“The past has happened, and sadly, there is nothing we can do to change it. However, there are many things we can do to rectify it, and this is one of those things — to celebrate the beauty that came out of it instead of always focusing on the negative aspects,” Jones said.  “At a certain point, we need to say and acknowledge that we are going to be better than this harsh history.”

“I think that this school is really special in the way that the girls here are always willing to contribute to things like this. I am very lucky to be here because I believe that a lot of girls will be really interested in Black Salt,” Jones said. “Hopefully Archer will get involved and provide Black Salt with the writers, artists and talented young women that it needs.”