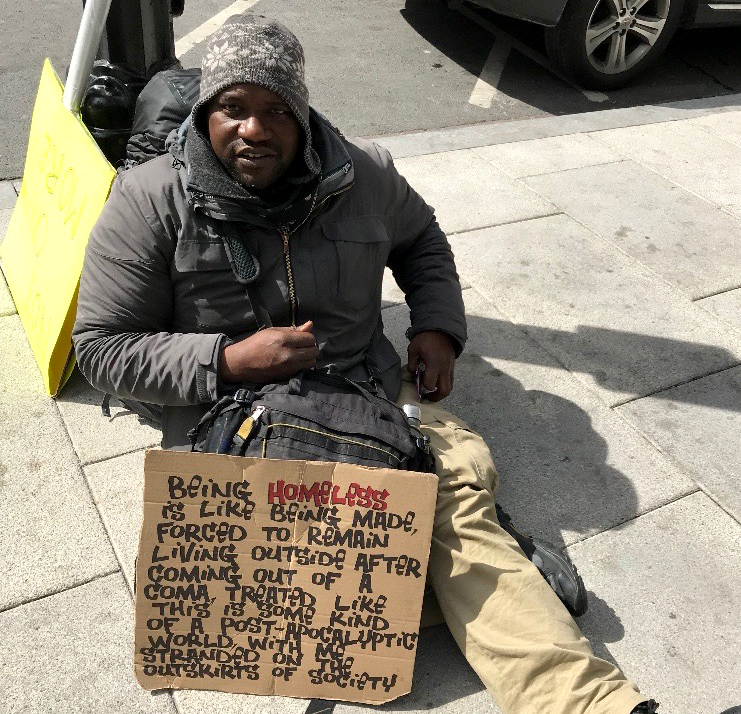 A homeless man poses on the street with a handmade sign. Kornfield takes pictures of homeless people and their signs in order to evoke empathy.

It’s cold and the sky is overcast. But there is nowhere to go because your home is on the streets of Los Angeles. Suddenly, you feel drops of rain and look up and the dark grey sky.  You run to find shelter under a bus stop. You are cold, tired and soaking wet. What do you do?

This is the reality many homeless people must face every day.

According to the Los Angeles Times, in 2017, there were almost 58,000 homeless people living on the streets and in shelters of Los Angeles. In the past six years alone, L.A.’s homeless population has risen 75 percent.

As the homelessness population increases, many resources have been established to help people who are struggling. Despite all of the initiatives, there are endless waitlists and many people are still left on the streets to fend for themselves without food or shelter.

Every year, volunteers conduct homeless population counts on a given night in January.  The counts are measured by “spot areas,” which are small individualized areas of homeless people living throughout Los Angeles.

Sitrinzy Thompson, a University of Southern California [USC] graduate student and intern at People Assisting the Homeless (PATH), described the situation in L.A.

“On Skid Row, there is a whole area of homeless people living in encampments,” Thompson said. “When you go to Santa Monica, it isn’t as visible. Not to say that there is not a homeless population, there is, but they have more resources.”

The Ocean Park Community Center (OPCC) in Santa Monica is a shelter that aims to “empower people to rebuild their lives.”

Although homelessness is a widespread issue, assistant director at OPCC, Christina Dias, said there is a difference between a poor person and someone who is “chronically” homeless.

“There are some people that become homeless, and they have friends and family that can support them,” Dias said. “A lot of our clients are chronically homeless; they have been homeless for many years, or they have gotten an apartment and lose their apartment and have to live on the street. Chronic homelessness is mostly what we deal with. Very rarely do we have someone who is a first-time homeless person.”

According to Dias, the shelter is about 70 percent men and 30 percent women, and there is too high of a demand for the amount of space they have at OPCC.

“The sad news is that there are no walk-in shelters in Santa Monica. You can’t have someone just walk in the door and say, ‘I need a bed.’ We are almost always full, and even if there is a bed open, there is someone coming in the next couple days that has been on a waiting list,” she said.

Dias feels that one of the main reasons for elevated homelessness in California is the high cost of living. She noted that many individuals move to Los Angeles thinking they can make a better life for themselves but do not have a steady income or a permanent place to stay. She describes this as “bad decision making,” and many clients come to OPCC because of this.

Not only are there extreme amounts of homeless adults, but there are countless young adults are living on the streets. However, Dias said that OPCC cannot accept young children or teens because of the level of mental illness they see in other residents of the shelter.

Elena Burdick is a USC graduate student studying social work, who currently interns at Covenant House  — a shelter for homeless youth. At the shelter, she works with young adults between the ages of 18 and 24.

Burdick works in the mental health clinic providing therapy with clients who need or want it.

“In order to stay at Covenant House, you have to either go to school or work. They want you to save money, so you are not homeless anymore. There’s a whole program and support around that,” Burdick said.

According to Burdick, there is a high school on the campus where students can attend school and earn their diplomas. Here they can also work in the computer lab to look for jobs.

Thompson said the youth that stays at Covenant House have usually experienced extreme distress at some point in their lives or are rejected by their families because of their sexuality or gender identity. She described some of the common factors that contribute to young people becoming homeless.

“[There is] a lot of trauma. [Some are] sexually abused, even as young adults because a lot of them are sex workers,” she said. “Often, there is a lot of human trafficking [victims]. There is, in fact, a bed at Covenant House just for human trafficked victims.”

Covenant House accommodates to each individual’s certain needs. Most of the youth have to share rooms, but a human traffic victim gets their own room by themselves because it is so traumatic.

Burdick said her experience working with the homeless has changed her own point of view.

“They have taught me so much about gratitude and being grateful for what we have because they have nothing. I know people who are homeless and their stuff gets stolen all the time,” Burdick said. “They only have a blanket, and it will be stolen.”

There are also many teenage volunteers throughout Los Angeles trying to combat homelessness by working with various organizations throughout the city.

Dylan Russo is a senior at deToledo High School and volunteered with PATH for 11 years. He visited one Sunday a month to cook breakfast for the clients, then he socialized and talked to people that are living there to hear their stories. Russo stopped working at PATH when he was 15.

Russo said the homeless people residing at PATH were “generous” and “sincere.”

“One guy knew that me and my brothers used to love playing video games on our GameCube. His mom used to work for some company, [and he] got us a copy of the new Spiderman game that came out,” Russo said. “I guess I was in shock that this guy would put so much work into giving back to us after we gave back to him.”

“[Volunteers] help [the homeless] get important documents because some of them don’t have ID or birth certificates. It’s hard to get housing without those forms of documentation,” Thompson said. “They help get that type of information and then they link them with a social worker and a case manager who helps them with housing and different community resources like mental health specialists or primary physicians.”

Although the homeless rates in Los Angeles are severe, there are many outlets and resources to help end this widespread issue.

Russo emphasized the importance of this advocacy to help the homelessness issue.

“Living in Los Angeles, I see [homelessness] everywhere. People definitely should, myself included, make an effort to help out at a homeless shelter, food pantry or soup kitchen,” he said. “Just anything to help out because [they] are people too, and we often forget that.”