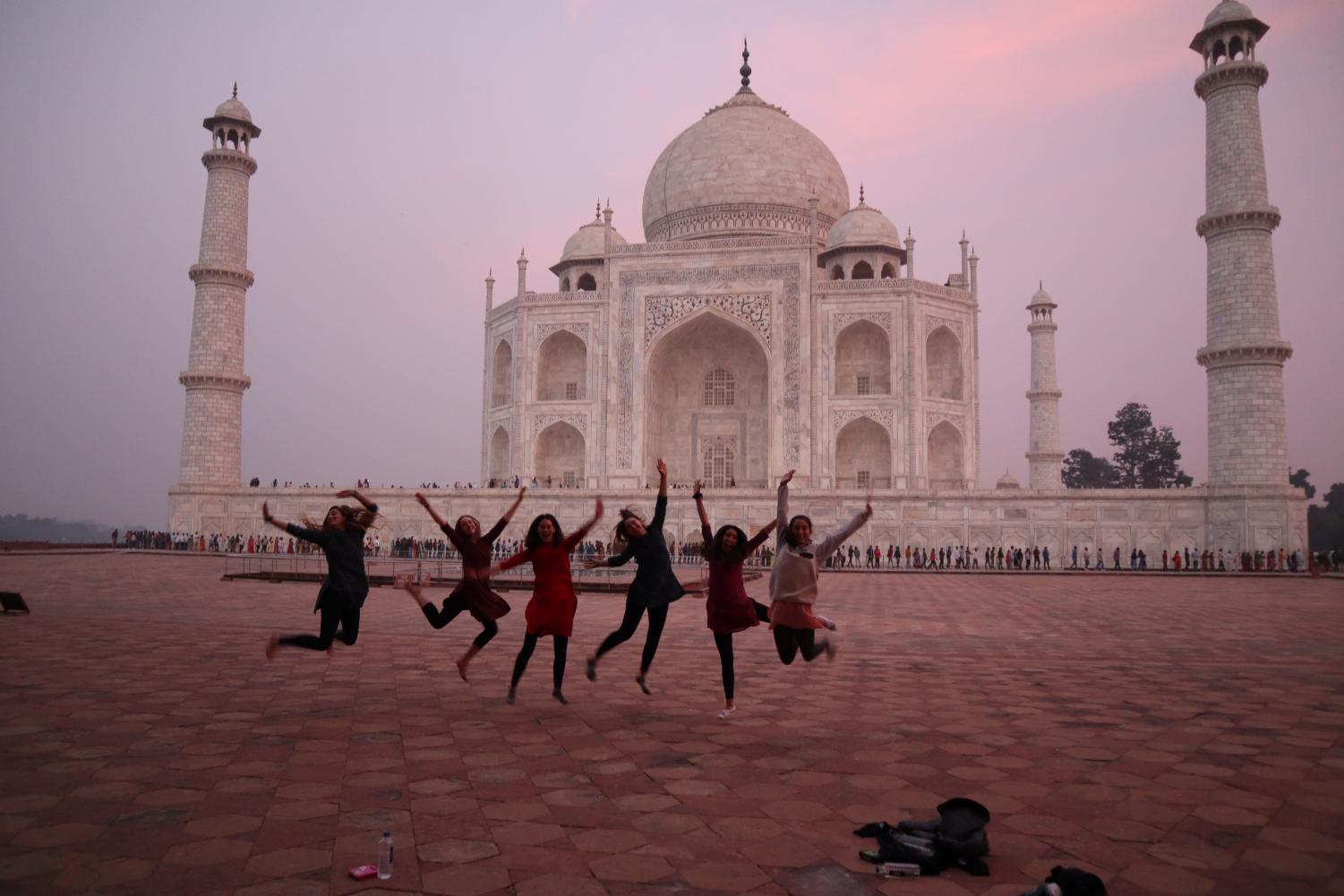 Six Archer students are captured jumping in front of the Taj Mahal at dusk. “You can even fathom [how big] the Taj Mahal is,” junior Ariana Golpa said. “We were all in awe.” (Photo credit: Sophie Larbalestier)

Six Archer students are captured jumping in front of the Taj Mahal at dusk. “You can even fathom [how big] the Taj Mahal is,” junior Ariana Golpa said. “We were all in awe.”

‘I have never experienced anything like this’: Archer Abroad travels to India

By Nicki Rosenberg and Molly Goldberg

This Thanksgiving, 13 Archer students and two faculty members swapped their turkey and stuffing for rice and dal as they traveled to India for Archer’s annual Abroad Trip.

From Nov. 18 to Nov. 30, the group traveled through India with Where There Be Dragons, a company that offers cultural immersion programs for small groups of students and adults in Asia, Africa and Latin America.

After a layover in Guangzhou, China, the group began their journey in Delhi.  Twelve students — one student joined the trip later — and two staff advisers kicked off their experience by adventuring through the 400-year-old Chandni Chowk market and shopping for clothes at Fab India, a chain store retailing garments, furnishings, fabrics and ethnic products handmade by craftspeople across rural India. They ended their time in Delhi with a South Indian dinner and prepared for their morning flight to Jodhpur.

“Even with the non-stop travel, the girls have been extremely engaged,” group instructor Debi Goldman wrote on the group’s online Yak Board. “[They have been] pushing themselves to fight the jetlag and grab onto every moment of their adventure!”

Junior Dylan Marmur said the group wanted to make a difference where they were volunteering as much as they could, but their guides told them to adjust their attitudes.

“I think what surprised me was that one guides said to me that no matter how hard you try, you aren’t going to make a difference, and you need to know that. None of you should be going in there with the attitude that you’re saving these kids,” Marmur said. “All you can do is try and bring a smile to their face[s], but their lives went on before you and they will go on after you.”

When the group arrived in Jodhpur, they began by visiting various women’s empowerment centers, such as the Sambhali Trust and Abhala Empower Center. At the shelters, local women and children are taught academics, hygiene, politics, geography, self-esteem and more. The Archer girls were able to assist the centers with administrative work and spend time with the women and children there.

“At Sambhali Trust…I was wearing a ring and a girl I was with, named Sarim, was three days older than me. She complimented my ring and I complimented hers, and then she asked me, ‘So when did you get engaged?’” Marmur said. “In that moment, I realized how lucky I was to have such an elongated childhood…because she was only three days older than me and had gotten engaged the day before. It was really crazy to me.”

The students faced situations that they had only ever read about and experienced many new cultural norms.

“One of the women was only 16 and was married and had a child,” junior Faith Hernandez said. “We had read about this cultural norm, but meeting someone who lived it was what made it feel real.”

After spending time at the women’s empowerment centers, the group arrived at Vatsalya, a school and orphanage that Archer has partnered with for the past two years. Here, the students helped the school prepare for their annual fundraiser and learned more about Indian culture. Students said that they were able to connect with the children, regardless of cultural and language barriers.

“I loved the smiles, the laughter and the overall happiness of the children,” junior Leila Mirdamadi said. “There will always be a language barrier between us but we knew that through a simple exchanged smile, we were able to connect nonetheless.”

Across the world, everyday life looked very different to these Archer students and shifted their perspectives.

“One day we were all waiting in a bus that was parked in front of our hotel. These women came up to the windows and started knocking on them. They were holding babies and asking for money. We later learned that these women are most likely victims of human trafficking and their leaders are sending them out into the city to get money from tourists and people in the city,” junior Ariana Golpa said. “I have never experienced anything like this. People on the other side of the world are going through the unimaginable. We don’t even realize how privileged we are.”